Gig and I went to see Lincoln yesterday.  We hit a matinee showing ($6.50 per person - not bad).  I think that's a fair price to see a Speilberg movie that will likely win a few Oscars.  Just for the record, I almost never go to the movies.  I recall seeing the movie Alive back in 1993.  In 2010, we went to see Dinner with Schmucks featuring Office legend Steve Carrell.  Before that, I saw Donnie Brasco at the Ohio Valley Mall back in 1997.  That's a pretty big layover (13 years).  I'm not exaggerating.  I just normally don't enjoy going to the movies.  I'll occasionally watch them when they come out on HBO or Starz or whatever, but for the most part, I just don't possess that burning inclination to sit motionless in a movie theater for 2+ hours.  Usually there's some bozo throwing popcorn or some idiot teenager rolling Lemonheads down the aisle.  And I absolutely despise hearing collective laughter when the joke is unfunny.  And usually, the volume is too loud.  At age 42, just call me "quintessential grandpa."

So as I was saying, we went to check out Daniel Day Lewis.  Hard to go wrong with this guy.  In Gangs of New York he had a mind-blowing performance. 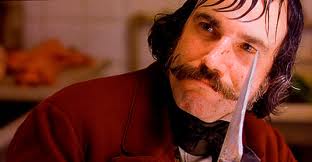 I incorrectly assumed the movie would include some epic Civil War battlefield scenes.  But it mostly revolved around the power, or lack thereof, of the Emancipation Proclamation and the abolishment of slavery via the 13th Amendment.  Of course, the Confederacy vs. the Union served as an overriding macrocosm.  I also assumed that Lincoln's assassination would occupy a prominent part.  Wrong again.

I liked the fact that Speilberg concentrated more on the content and process, rather than the action and special effects.  Made for a more thought-provoking afternoon.  As expected, Lewis' portrayal of Abraham Lincoln was spectacular.  Great script too.  Well worth checking out.  Maybe I'll hit another movie... when I'm 64.

My parents once ate dinner with Speilberg in Los Angeles (or it may have been Phoenix).  I think it was for some kind of Israeli/Jew fund-raising event.  Not sure of the specifics.  When I pressed them for details, they admitted they just sat at his table.  I don't recall if they directly spoke to him.  I wonder if I've ever broken bread with anybody famous.  Through the years at Jambo, we were fed some modified gruel backstage.   So I guess that counts... sharing Salisbury steak with negro country music outsider Neal McCoy.  Yep, that's what it comes down to.  Now I can die with no regrets.

We stopped by Coleman's Fish market in the late afternoon (2 fish, a seasoned fry and a lobster bisque).  As we were just about to leave, a disheveled man emerged from the restroom.  He walked over to us and with no introduction whatsoever, he asked, "Hey, are either of you Methodist?"  Gigi and I looked at each other with obvious consternation.  We replied, "Uhh, no."  Then, we made direct eye contact with the dude and realized that his chin was literally covered in blood.  Then he asks, "Ohh, I get it.  You guys are Catholic, right?  I laughingly respond, "Actually, I'm not anything."  This left him seemingly confused and without uttering another word, he walked away.  Gigi and I just looked at each other... what the fuck was that all about?  And why was he covered in blood?  Could this have been some kind of "Jesus Christ, Center Wheeling, flood of blood, fish market sit-down?"  In retrospect, I should have told him I was a vampire.

Speaking of vampires... back in 1994, I was bitten on the neck by a self-professed vampire.  No fucking joke.  I'm pretty sure his name was James.  Everyone called him Cha-Cha and he lived in Shadyside, Ohio  The actual biting took place in Wheeling at Mac's Club on Washington Avenue.  Fortunately, he didn't bite hard enough to draw blood.  When I asked him, "Dude, what the fuck are you doing?  Why did you bite me?" he responded, "Saf, I'm really sorry.  I just have this crazy vampire fetish and it's a full moon.  I then asked told him, "Well, why don't you bite a woman?  I'm not a good candidate for this vampire shit."  He replied, "I know... I know... I get really weird when it's a full moon.  It doesn't matter if you're a man or a woman.  I'm sorry Saf."

Roughly 5 years would pass til our next encounter.  I ran into him and his very pregnant girlfriend (I think her name was Melony) on the Ohio State campus.  He wandered off in a stumbling, drunken haze.  I told his girlfriend about the '94 biting incident and she assured me that "he bites all kinds of people.  Yep, everyone gets bit at one point or another."  Apparently, if this constitutes normal behavior, I've been living underneath a rock.  What kind of planet are we living on?  And all this shit happened way before the TV Vampire idiots bled their way into the arteries of America.

I also recall this one-night stand (in all truth, it lasted a couple of days).  But anyway, we're in bed and this much younger girl bit my left nipple.  I forget my exact words but I basically informed her "Hey, I'm just not really into the sexual aspects of being bitten."  And she responded with the same general weirdo comment, "I just love to bite people.  I can't help myself.  Eric, I can't help it."  I then told her about my prior vampirical experience.  She explained how "it ain't no big deal."  Earlier, she had made a big production about her "alleged bi-sexuality."  Now I know nothing about the Draculated-werewolfer-vampish subculture.  But I think it's safe to say there seems to be a bisexual undercurrent.  At least, that's been my experience.  Granted, it's quite limited.  And for that, I am grateful.  Perhaps I should consider carrying a cross or wearing a garlic bulb necklace.  Normally, I'm not superstitious.  But I'd consider implementing "reasonable measures" to dissuade the Dracko-Whacko's.  Hopefully, they'll just stand down, or better yet, steer clear.

This blog entry was very entertaining. I am more shocked you went to the MOVIES and actually like the movie!

I can't take the sound of people eating popcorn in theaters. Who came up with the bright idea of serving an annoyingly crunchy food in a place where hearing is a big part of the experience? I also can not watch a football game in a bar. I can't take the clapping and armchair quarterbacking. I guess I have a weird thing with sounds.

I also have serious issues regarding sports fans in bars. I don't mind enthusiasm over big plays (scores, interceptions, late hit personal fouls) but the NEED to violently clap or whistle every time their team gets a first down... it leaves me in a modified rage.

Another one of my least favorites is the guy who sees a penalty flag on a punt return and yells "block in the back!" Yeah dude, no shit. You're a genius.

I agree with Larry on the eating of the popcorn. It is disgusting. The smell, the sound...YUCK!
Fortunately we went at a time with a bunch of old people...so no popcorn was devoured!!
–Gig

The "vampire's" name came to me a few days ago. It's Dean, not James.