I'm thinking about the teenager who stabbed 20 kids with multiple kitchen knives at Murrysville High School.

So this admittedly tasteless meme is brought to you by the National Rifle Association in conjunction with the Pennsylvania Culinary Institute. 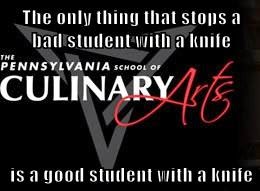 Seriously though.  Every time there's a school shooting, the pharmaceutical industry and the mainstream media collude to prevent the American public from learning about the specific medication that likely played a significant role in these violent outbursts.  Why doesn't one of these investigative reporters or aggressive TV personalities demonstrate some real GRIT?  Oh yeah.  I forgot.  It's likely written into their contract --- if they mention the name of a drug or pharmaceutical company, they lose their paycheck.  Pfizer bitches.  Merck assholes.

It's the ultimate hypocrisy.  And people wonder why nobody trusts the U.S. government.  The funny thing is how they'll tee-off on the kid if they find out he binge drank or used marijuana.  What a joke.

I just read an article on Infowars how the one of the lead FDA agents opposes marijuana legalization on the grounds that a pot brownie, if eaten by a dog, is capable of killing the animal.   I honestly thought it was a parody or one of those Onion articles.  It's that bad.

Incidentally, I didn't stab anyone today. However, I did lob a golf ball at a deer from about 100 ft. The scuffed up Nike hit the mangy animal squarely on the back.

The deer momentarily jolted but and moved off.

Crispin #6 was the site of the assault. The incident propelled me to a narrow one stoke victory over J-Rec.