Gigi and I took in a brief Midwest road trip over the 4th of July weekend.  Considering our vehicles are a little dated (2001 Subaru Outback and a 1995 Honda Civic), we thought it would be advisable to rent a car.  The prospect of breaking down in Gary, Indiana just didn't seem too appealing.  So we snagged a midsize, which translated into a 2015 Nissan Altima, which loosely deciphers into vehicular nirvana.

We checked inn to our hotel, a Hampton In, inn downtown Chicago early Thursday night.  About 3 miles up from the Soldier Field.  Snagged some dinner at a nearby restaurant named Beatrix.  Gigi had a pork shank w/ peaches.  I had the braised short ribs w/ mashed potatoes.  Good stuff.  Took in a few drinks at the hotel hot tub and called it a night.

We checked out early (literally not figuratively) and parked at a nearby lot (Adler Planetarium along scenic Lake Michigan).  All parking was $49.  Not much you can do to avoid the evil reality of parking and tolls.  We're gradually reaching a tipping point in American society.  When the cost to park your car exceeds the cost of the event itself.

Even the Count Chocula crap was pretty good.  You just have to be in the right frame of mind.  I absolutely despise all the fruit-craft beers, particularly anything with lemon or raspberry.  But of all the idiot beers, I abhor anything pumpkin/cinnamon spice related.  Why not just force feed yourself a tablespoon of nutmeg?  Why would you pay a premium price to quaff this nonsensical Bahama Mama bullshit?  Note: we did have our standard backup of MBL (Milwaukee's Best Light), but that's neither here nor there.

So we got our "hike on" and hit up some of the local sites.  Then, we had a chance encounter with our friends from Wintersville, Ohio (Dave and Renea).  Great seeing those two.

Those who know me, are aware that I have an extensive Grateful Dead license plate collection.  About 380 actual pictures of plates taken from the lot scene circa 1990-1995.  During the move to Pittsburgh, everything was disassembled from my bedroom wall.  One day I'll make a poster out of them.  In the interim, enjoy this fantasy set list I constructed back in 2011 for my odd-oh biography. 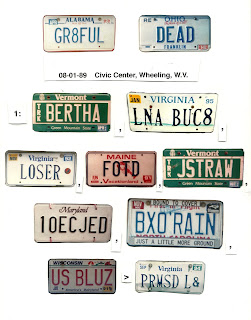 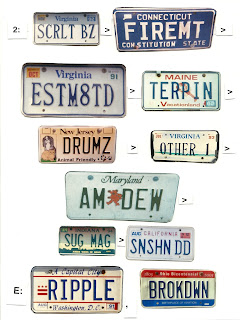 Naturally, I kept an eye out for some new ones, but didn't have much success.  We spotted a hippie bus with a California plate (DAWHEEL), but I couldn't get it in time.  Saw a Wisconsin SLPKNT which I had previously taken back in the day, but the Saab owners had left the scene.  What a pity.  I would've enjoyed speaking with them.  I did scrounge up these two. 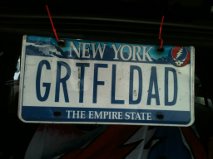 This one's a little on the lame side.  I mean.. I guess I get it.  I'm sure he's a proud father of his patchouli drenched offspring and all... but seriously, c'mon man! 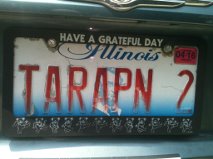 This Illinois (Terrapin) is kinda weak but the guy who owned it was exceptionally cool.  Apparently, his wife "used to date Bob Weir."  Odd... because I always thought Bobby was closeted homosexual.  His gang regaled us with a variety of classic acoustic rock songs.  And their leader told us of his 1990 tour exploits at the Tinley World Music Amphitheater (among other places).  Great storyteller.  He also gave us some patriotic jello shots and a couple bumper stickers. 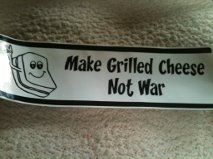 I'm normally not one who emblazons my vehicle with skulls and roses or dancing bears, turtles and the historic evolution of the mushroom.  But I do like the smiley face on the grilled cheese.  Maybe I'll stick it on our scrabble notebook.

Having no tickets in hand, we kinda made a deliberate decision to NOT compete with the legions of miracle seekers.  It's always about supply and demand.  Lamentably, the dreaded hordes of stank were inextricably on the prowl, fingers raised in abundance.  We could have given it a better effort but it just didn't conform to the flow of the afternoon.

Towards crunch time, this one crazed, zany Dead fan tried to give Gigi his ticket.  He acted like he wouldn't be able to cope with the sensory input overload from a rock concert.  But she just couldn't accept it.  We hung out with him for a good bit and "brought him back down."  He thanked us accordingly for our discretion and psychiatric counseling.  Then, he abruptly bolted into Soldier Field.

Having not seen any of the three actual Chicago shows, I'm won't offer a lengthy analysis of the set lists.  Suffice to say, I really liked the song selections from the 4th and 5th.  I zipped through some of the pay per view footage on youtube.  The musicianship seemed a little slow for my taste, but that's just me.  In retrospect, I'm content to leave my memories of the Dead firmly grounded in 1989-90.  Everything else, I just don't take too seriously.  Maybe 1985-1988.

One last observation of the Fare Thee Well tour.  I have zero tolerance for these fake laminate, cardboard idiot necklace things. 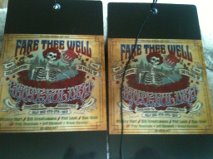 These are NOT badges of honor.  They are badges of shame.  Why must people advertise that they're "concert newbies?"  It's like those Japanese tourists relentlessly snapping pictures of the McDonald's golden arches.  But duhhh, it came with the $199 VIP package.  Yeah, nice job fucko!  You got a dollar t-shirt, a vegan hot dog, a single plastic rose, that 10 cent wearable and a Casey Jones "high on cocaine" energy drink.  Way to go.  I'm really impressed.

So we bolted South as the band finished up with Help > Slip > Frank.  Figured it would be best to not spend an hour or two in heavy traffic.  Snagged a room at the Radisson Hotel in Merrillville, Indiana and called it a night.

Next morning we wolfed down a surprisingly tasty hotel breakfast and headed down I-65.  Stopped to refuel and grabbed an extra 6-pack of Red Stripe.  We hit up the Tippecanoe Battlefield Memorial adjacent to Prophetstown State Park near Lafayette.  Not bad, many perished, nice restrooms, avoided the gift shop.

We arrived at the Indy Motor Speedway around 3pm.  Huge line of traffic.  Ironic, because we just strolled in and parked for free at a lot adjacent to the Southeastern grandstands.  Why are all these people desperate to pay and park in the infield when you can just use the perimeter lots?  I don't get the mindset.  Must be an "Indy manners, Peyton Manning hospitality thing."  The locals will patiently wait and pay out the ass... while the out-of-towners are treated like royalty.

We had little difficulty in snagging two freebies.  One was a gold ticket, the other a bronze.  With applicable service charges and printing fees, one was $400 and the other was $100.  Ouch.  People were eating tickets left and right... as if they were comfortably throwing away food at a Golden Corral buffet. 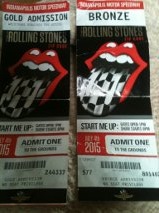 You could stand in three different areas (Bronze, Silver or Gold).  If you've never been to a concert, that loosely translates to close, closer and closest.  Then, we fashioned some "illegal" wrist bands to help expedite our move to the front. 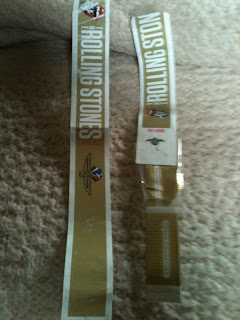 I must concede... I had an unbelievably naive perspective of the Stones concert at IMS.  For some reason, I thought all of the grandstands would be used for seating.  And the in-field would be for standing general admission.  Of course, if my vision was accurate, attendance would have been around 3 million+.

Fuck it, there's a nine hole golf course inside that place.

Turns out, they cordoned off a small section for a crowd of roughly 50,000.  However, it was the biggest (and only weekend) concert in the history of the motor speedway.

The concert itself was bad ass.  Far superior to the uninspired Pittsburgh performance.  You can't even compare the two.  The band was energized.  At one point, Jagger referenced a bad joke about New England's Tom Brady which left him feeling a bit "deflated."  Funny stuff.
Highlights for me were a soulful rendition of "Wild Horses" and an absolutely killer "Gimme Shelter."  Another highlight --- intentionally skipping the Rascal Flatt's opening act.

Incessant fireworks following the concert.  After the show, Gigi found a KOA campground and whipped out her pop-up tent.  Needless to say, we crashed out in no time.  Woke up early and hit the road.  Stopped at Katzinger's Deli in Columbus and got some soup and sandwiches to go.  Katzinger's gets my atheist Jew, godless kike seal of approval.  Word to the wise, pay the extra couple bucks and get the bigger sandwich.  You won't be disappointed.  We weren't.

And oh yeah, we snagged a GD sign off the western chain-link fence of Soldier Field.  Not a huge deal, but it did help emotionally compensate for being shut out.  One of the banned items on the list is confetti!  Gimme a fucking break. 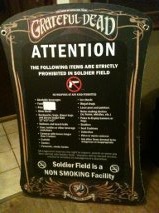 And that concludes our 4-day, haphazard vacation of the Midwest.  Let me put it in terms you deadheads can comprehend.

If you enjoyed this dueling concert review, please consider reading either of these articles I've penned regarding the Grateful Dead or Rolling Stones solving a looming, asymmetric national security threat to the United States.  It's a black swan event that could very well be the next 9/11.  But don't worry so much.  Just sit back, drink your beer and smoke your grass.  Hey, nobody else gives a shit.  So why should you care?  You god-damn fucking hippie.

Tons of people got in for free or by bribing security all 3 nights.

Bribing security? With what? Grilled cheese and Beast Light?
We never pay for tickets so that strategy wouldn't appeal to us.