Donald Trump is NOT an actual politician.  He's more of a semi-skilled carnival barker.  A billionaire agitator at best.  Not even fit to carry Vince McMahon's jock strap.  However, he is well-suited for the ignorant populist faction of the Republican party.  It's the ultimate irony for the conservative establishment chicken-hawk wing.  If McDonald's pink slime could talk, it would surely say... I'm lovin it. 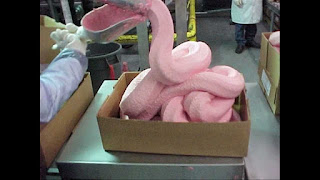 Let's face it.  About 25% of his rallies consist of Trump heckling back at protesters.  Another 25% is him bragging about his poll numbers and ridiculing the opposition.  Mostly ad hominem taunts and corpulently-veiled threats.  Another 25% is devoted to lofty rhetoric, i.e., Making America Great Again, I'm wealthy beyond your wildest dreams, our politicians have failed us (they're all stupid and worthless... unless they support me.  Then, they're okay).

His policy positions are intentionally simplistic.  That could be the understatement of the century.

Isis is a bunch of bad dudes.  They're chopping off heads during Christmas.  We need to torture them and take their oil.
Build the wall and make Mexico pay for it.
Gotta fix the trade imbalance with China.
Muslims should be banned from entering the country until we "can figure out what's going on."
And finally, he can't be bribed by lobbyists and bought off by corporate special interests (there could be a minimal ring of truth to this, at least compared to Congress at-large).

All this infantile rhetoric makes me physically ill.
So if you're serious about disrupting a Trump rally, here are some unorthodox suggestions.

1) Consider attending the event in a wheelchair.  Those at the rally are far less likely to get into a confrontation with someone who appears physically disabled.  And if security tries to remove you, it makes for incredibly bad optics on television.  These days, when perception is reality, Trump goons picking on the handicapped would not go over well.  Him mocking them is one thing.  His minions getting rough with them is another.

If you can't borrow an old wheelchair, consider scoring a cheap pair of crutches from a thrift store.  Crutches also make for an excellent self defense weapon as traditional security measures and  magnetometers do not apply.

If you have military gear (particularly of the Vietnam era), make sure to wear it.  A subtle reminder that Trump got 4 preferential deferments from the draft.  Obviously, this would make him a great, amazing, wonderful, terrific commander-in-chief.

Instead of whistling or yelling "Bernie, Bernie", resort to screams of terror and agony as if you're afraid that your life is in imminent danger.  Not only is it much more confusing.  It's also disturbing and could provoke an EMT response.  There's a big difference between the generic sound of "USA, USA"or "TRUMP, TRUMP" and shrill, bone chilling screams.

2) Purchase a case of those "snap bang" fireworks and distribute them accordingly.  Hand them out to like-minded individuals heading inside.  Scatter a small handful in each of your pockets.  Those little snappers make a ton of noise.  If people around you are getting escorted out, discreetly start throwing them at the ground.  This is a secret service nightmare as the noises could be perceived as a weapon discharge.  If done effectively in various quadrants of the venue, they might pull the plug on Trump's mic... merely out of an abundance of caution until they get a handle on the situation.  Protesters wouldn't normally have the guts to pull this one off.  But if they hear others doing it, there could be a mob mentality participation.

These snappers are dirt cheap.  Sold by the case for less than $20.  And unlike traditional fireworks, you can buy them in all 50 states. 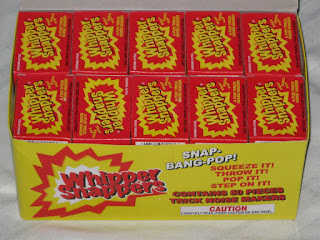 3) Download various piercing, random noises on your cell phone.  Errant high pitched screams, feedback noise, startling pinball ring tones, etc.  You can even purchase a miniature sound amplification device for relatively low cost.  This just adds to the irritation level.  Plus, others who hear the artificial noise, might follow suit.

4) Sabotage Trump's twitter feed.  He routinely uses it as a primitive weapon.  So can you.

If you're attending the Trump rally, I heard that protesters are going to be keying cars, slashing tires and smashing windows.  My best advice is to park at least 1 mile away from the site.  Event organizers are encouraging Trump supporters to use public transportation.

Post this same information on the local newspaper and television facebook pages.  Flood social media.  People won't attend if they think their car might be vandalized during the rally.  Make potential references to drone threats, active shooter situations, hydrochloric acid in the face, things like that. Always preface every statement with... I heard a rumor that...

5) If the venue has an upper level, distribute precautionary literature beforehand that warns rally-goers about the dangers of potentially being thrown off the balcony.  Be particularly wary of muscular, heavy-set black men or other ethnic minorities in elevated locations.  Create a heightened level of fear and distrust in the venue.  Some people will think twice before attending.  Fear and paranoia sells - just ask The Donald.  It's pretty much the premise of his entire campaign.

6) If you have some serious courage, bring extra pairs of shoelaces and literally tie yourself to a fixed object.  Use an old pro-wrestling trick.  Knick your forehead with a tiny razor blade.  Relatively pain free with no permanent scarring... unless you take it to the brink every night for a couple of decades. 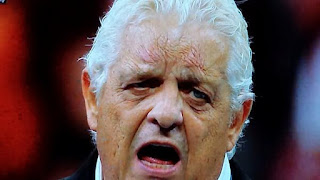 We're going to Make America Dream Again.  This would make for a great t-shirt.  A pic of Dusty Rhodes' mangled forehead.  Speaking of deceased pro wrestlers, I saw a Piper's Pit t-shirt at yesterday's St. Patrick's Day parade.  Only in Pittsburgh.  I say that as a compliment.

Anyway, traditional security will be a helluva lot more squeamish and tentative before getting involved with someone who has a trail of blood streaming down their face.  The truth --- bleeding makes the highlight reel.  Once again, it's a secret service nightmare and public relations mega-disaster.  Trump really doesn't have a traditional "damage control" team.  He just makes it all up as he goes along.

7) If you're getting escorted out, look for an opportunity to deliberately trip and hit the ground.  The people tossing you from the venue will be blamed for using unnecessary force and the inability to show a modicum of restraint.  The notion of protesters being manhandled by security does not sell in a general election.

Always carry mace or pepper spray.  Whether or not you'll be forced to remove it from your key chain is a matter of random discretion.  Security never specifically addresses this particular self-defense weapon, because they don't want to draw attention to the fact that it's universally legal in stadiums, arenas, amphitheaters, etc.

8) If you see Trump supporters being interviewed on live national television, enter the fray.  Pretend to be mentally retarded or pull a Rick Astley in the background - Never Gonna Give You Up dance moves.  Despite what many think, the old-school "fuck her in the pussy" disruption is alive and well.  That classic ain't goin' away anytime soon.  But I prefer the simple "Duhhh, I love Trump," spoken with the traditional retardo inflection of course.  A little low brow perhaps but very effective nonetheless.

9) Design a few signs that are by definition, totally absurd.  It makes the entire crowd look like a bunch of morons.  I used this ploy, with minimal success, at several McCain/Palin rallies.  I wrote about it in my auto-biography. 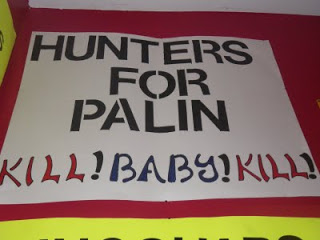 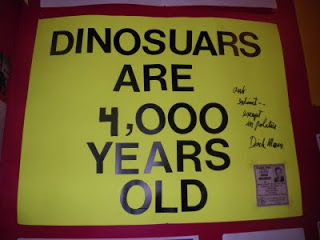 Note: the intentional misspelling of "dinosaurs."  I liked that one so much, I had it signed by Fox News pundit/political strategist Dick Morris.

I have a tenth suggestion but it's a little over the top.  If Trump-mentum persists, I'll pull it off if when the Jag-Off shows up in Pittsburgh.  And no, it's not an artificially generated stampede.  Although I do think it could happen at the Republican National Convention. Wouldn't it be nice if someone could warn venue management at Quicken Loans arena in Cleveland?  But regrettably, nobody's allowed to talk about it.  Ahh yes, the endearing catch-22.  How appropriate would it be if such a tragedy befell the evolutionary nay-sayers and their collective dismissal of herding instincts.  Ouch!

This has been such a mean spirited blog post.  Let's end it on a more lighthearted note.  Here's the many faces of Trump and his striking resemblance with raw chicken parts. 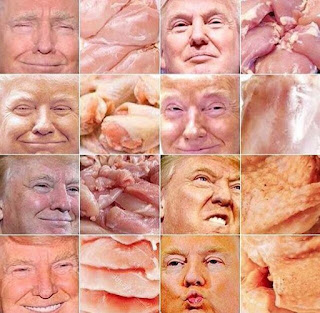 My favorite is the third one down on the right.  Pissed off chicken Trump.

While in the shower, I thought of two very simple, disruptive tactics. One is chewing gum. Blowing bubbles and intentionally cracking them from the inside of your mouth. Not the traditional hubba bubba bubbles. This is more of an art form. It takes a while to get the maximum volume. If one person does it, it's no big thang. But if you get 50-100 people doing it, that's a different story.

Another one is the patented "Nature Boy" Ric Flair's WOOOOO!!!! You do a loud WOOOOO at the end of EVERY Trump sentence. Just like the fans do at pro wrestling matches and Pittsburgh Pirates games. This is particularly effective because it marginalizes even the most serious discussion. Not that Trump is capable of thoughtful, reflective content. But it does have the potential to spread virally. Could be very damaging if the copycat precedent takes hold.

I think the latter would catch on like wildfire.

My philosophy is to avoid going to a Trump rally, avoiding the crowd, the noise and avoid any speaker "hurting my feelings". Yeah, I think that is what I'll do instead.

Here's an idea, how about you try to have a little dignity and show a little maturity with your constitutional right to vote and be politically involved? What in the world motivates somebody to let politics lead them in a direction to make a mockery of our process? Just go vote and stop being assholios.