I just found this meme generator site.  I'm gonna try and make about 2 per week.  I'll provide a tiny bit of background info just in case you can't figure it out.  Hopefully, it won't be necessary.  The essence of a decent meme is that 75% of the population should be able to "get it" without it being spoon fed.  20% of the country doesn't "get anything" under any circumstance.  5% choose to not participate and are irrelevant.

I think this Paulie Walnuts one has broad appeal.  It's in response to the recent A&E boycott/Duck Dynasty nonsense.  And just so everyone knows my thought process --- REAL free speech is meant to keep the government from arresting you.  It has nothing to do with money, or even worse, bible quotes and hurt feelings. 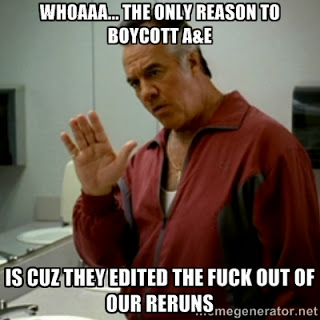 This second one was based on a sign I took to the Steelers/Bills game a few weeks ago.  The insinuation being that even a former U.S. Senator from New York, a brilliant politician and stateswoman, with a deep commitment to pandering to her constituents no matter what the cost...

Well, even she hates Buffalo. And she's running for POTUS! 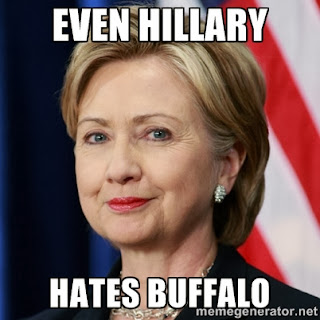 You could use this sign for any team playing the Bills.  I think it would go over particularly well in the AFC East parking lots (mostly the Jets).  And once every four years - at Lincoln Financial Field in Philly.

My temporary new hobby will likely be political in nature, but you never know.  I get pissed off about all kinds of weird shit - Donald Trump, trinket consumerism, Toby Keith-themed restaurants, Jagermeister, the Metamucil-like regularity of fantasy football conversations, etc.

If you have a good idea for one, lemme know.