Yesterday, during a semi-arduous 6 mile run in which I accidentally wore two different running shoes, I took a brief break and ate lunch at Krogers.  Twas a sample tasting menu of culinary delights.  It commenced with a miniscule, rhombus-shaped quadrant of sponge cake from the Starbucks.  Then, it was off to the sushi stand.  I gobbled down 2 portions of the California roll and a steamed dumpling.  If you're wondering what the suggested sushi sample limit is... well, there's an unofficial limit of 8.  And if you take the entire container... well, in this establishment, that's frowned upon. 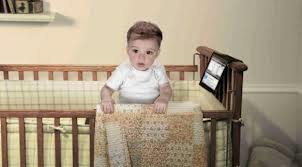 I don't know about you, but I've grown weary of the E*trade baby and his stocky brethren.

The dining expedition continued with a plastic dixie cup of field greens w/ roasted red peppers garnished with a spicy salamic slice, doused with a hint of Italian dressing.  Finally, it was off to the soup stand.  No soup Nazi in sight.  An elderly woman doled me out a mini-cup of some kind of Tuscan bean, pseudo-Progresso variant.

Dripping with sweat, I finished my Krogers dining binge and headed back on National Road.  I took a brief diversion down Washington Avenue and ran into the owner of Avenue Eats.  I STILL haven't dined there but will remedy that injustice by the end of this month.  I mentioned that I was going to see Eric Clapton and she inquired, "Oh... Wow... is Clapton on your bucket list?" 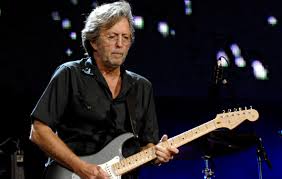 Needless to say, there are many things I wish to do before I die.  Milk a cow, feed the ducks, get a decent hole-in-one.  I got one on #17 at the Oglebay par 3 when I was a little kid, but I don't think that counts.  It was a line drive skidder that somehow ended up in the hole.  I'll never forget the name of the golf ball, a "GCI Faultless."  To this day, I've never seen or heard of that brand.  Saf, what's your favorite golf ball these days?  Gotta go with Slazenger but I'll play anything (with the exception of a Titliest or some Wilson/Spalding shit).

Anyway, as far as a bucket list goes, seeing the legendary dude who sings that sappy "darling, you were wonderful tonight" crap...  well, he's just doesn't do it for me.  (Kramer - "weather just doesn't do it for me").  Nonetheless, I would not be deterred.  So it was me, G Max and Slosh.  We made it to the gravel lot around 6:30 and hooked up with Gigi.  She had Snyder's chips and turkey-romaine wraps and mini turkey sandwiches on marble rye (not from Schnitzer's) 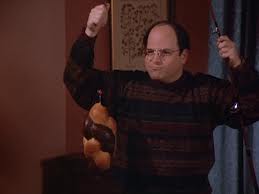 We also hooked up with the extended Wheeling crew (Tony Rocks, Capt. Lee and Perry (guy who tipped canoe in freezing crick).

I made a sign for the purpose of free ticket acquisition, but neither me nor Gig felt comfortable using it. 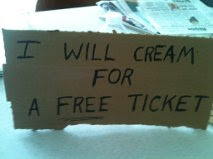 Tickets were a tough score.  I snagged a freebie from a sporty looking trio of guys in their 50's.  Gigi had a much tougher time.  She struck up a conversation with some neurotic weirdo-man from McCandless.  He had this poindexter nerd/slender Weeble-Wobble vibe going on.  He offered her the freebie but said he "needed her to go inside with him."  Of course, I nudged her off on the consolidated journey.  "I'll call you when I head in."  I went back down to the lower gate to hook up with the others and finish my wine.  And yes, if you're wondering... I'm officially 1 part boyfreind, 9 parts ass.  Not the proudest ratio.

So I saw a guy surreptitiously hide something underneath a garbage can.  I assumed it was narcotics, likely a stash of grass or something.  After he bolted, I went for the scavenge.  For the love of Ravenstahl, it was a weapon... 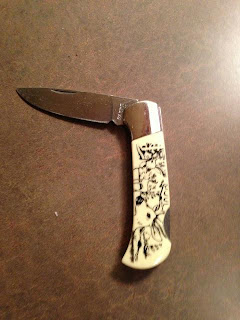 I ended up giving it to Slosh.

Anyway, Gigi comes walking out of nowhere.  Apparently, just as she was about to get scanned, the Consol guards swarmed her, the smarty-pants-Weeble-Wobble guy and this other freakshow... "tripping ballz pony-tail dude."  So she sidled off and wisely made the decision to retreat.

After exchanging some additional, meaningless pleasantries, we bolted inside.  We missed the entire opening act (The Wallflowers).  Clapton had just hit the stage.  We took our usual spot on the side.  Lower level, spacious seating instead of choosing to be crammed in with the condescending mongrel hoard.   The crowd just had this strange, pompous, Sewickley - Upper St. Clairish feel to it.  Kind of this reserved, sophisticated, "we know how to rock, but don't care to show it" vibe.

Clapton was decent.  Like I said, I'm not a huge fan but I did like "tempted by the fruit of another" Squeeze cover.  This version's from N'Awlins.


And the "Cocaine" closer was pretty cool.  All in all, Clapton and his fans just don't do it for me.

I'd have to say the highlights of the night for me were Gigi's turkey-lettuce wraps and her customary free parking at the Church of the Moops.

If anyone has ever seen my bedroom walls, you know that I save all my ticket stubs.  If you're bored to the point of tears (in heaven), there's some pictures in the 4th chapter of my odd, oh biography.  I've never admitted this... but one of the tickets is a FREAKIN' FUGAZI.  That's right.  It's from a show I never attended.  Pure blasphemy.  And it's a Clapton ticket from a 1998 show at the MGM Grand in Vegas.  My parents got some comp tickets at the main desk and checked it out.  They left a few songs in.  "Oh Rick, it was soooo loud.  It was basically intolerable."  Oddly enough, knowing my penchant for concert memorabilia... she mailed me the ticket stub.  So 15 years later in 2013, I finally got to see my Clapton-bucket list concert.  I suppose it all came full circle.

Yep, 1 part boyfriend...9 parts ass!!!
You got that right, Eric.
At least for that night!
If memory serves me correctly, I think you still owe me a "Yep I am going to say it.... "winner winner chicken" dinner, eh?
Maybe you could bring yourself back to 9 parts BOYFRIEND!! What da ya think?

I will make the necessary behavioral adjustments.