This Sunday was a beautiful, crisp afternoon.  Since I was heading up to Gigi-burgh, I thought I'd take in my first Buccos game of 2013.  She was working til around 3:30pm or so.  I figured I'd snag a freebie and hang til the 6th or 7th inning.

It's a Pirates game where tix are ubiquitous.  So I didn't even bother with a sign or anything like that.  And I generally try not to speak that much.  I just roamed the area holding my finger up - the universal sign for "I needs a ticket."  Eventually, I sat on the Honus Wagner statue platform... index finger raised, smiling and silently mouthing the words "need one." 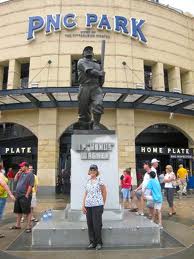 That's obviously not me... but strictly for reference purposes, my head is pretty much where this woman's ass is located.  My finger would be adjacent to her cervix or gynecologically pressing the vulva.

Anyway, it's heading into the 2nd inning and I haven't had any bites.  No luck whatsoever.  So I stroll over to the deep outfield entrance by the Roberto DiClemente bridge.  There's a guy standing there with a small stack of bleacher tickets, maybe about 6 or 7.  I'd say he was about 30 years old, very tan with slicked back hair and the over-sized, expensive sunglasses.  Very GQish.

I asked him, "Hey man, you got an extra to spare.  I was just looking to get into the game for a little bit."  He looked irritated.  Yeah, okay.  Gimme 5 bucks.  To which I respond, "Well, I was hoping for a freebie.  I won't be sitting next to you.  I just have some time to kill."

Then he looks at me with this absolute look of putrid disgust, "Why the hell would I give YOU a free ticket?"  I politely reply, "Well, maybe you could think of it as a gesture of goodwill."  He sharply retorted, "I'd rather fucking eat it (referencing the ticket, of course).  Then I respond, "Well, that's one option."

Then, he scowled at me and purposely decided to enter the gate... as if to say, look asshole, I'm going to walk in with this stack just to spite you.  I just shrug my shoulders and walk away.

As I'm heading toward the 3rd base outfield entrance, I see some Reds fans talking with this scalper dude I know.  I ask the guy how much he wants and he replies, "5 bucks."  Another bleacher seat.  I explain that it's against my personal code of conduct to indirectly augment the fortune of Pirates owner Bob Nutting.  His buddy laughs while I strike up a meaningless conversation about Ohio State President Gordon Gee (he was wearing an OSU football shirt).

So it's between me and the scalper.  The scalper is offering him a grand total of $2.00 and I'm offering zilch.  The Reds fan tries to get me to bite, but I just will not relent.  "C'mon man, I only want five bucks.  That's less than the cost of a beer."  I reply, "Yeah, I know... I'm just not in the habit of paying to see a Pirates game."  He turns his head and grabs the two single dollar bills from the scalper dude and shakes his hand.  At this moment, the guy must have thought he was T. Boone Pickens staging a hostile takeover of Occidental Petroleum.

Anyway, they head toward the gate.  I look at the scalper guy (I know him well, but forget his name).  He looks at me and says, "I'd offer to sell it to you for cost, you know, 2 bucks.  But I know you ain't gonna do it."  I lightheartedly reply, "And you would be correct, sir."

So I guess I'm just venting.  I don't think I've EVER been shut out of a Pirates game.  I saw about 50 games from the limo driving days and never paid a cent.  My complaint here centers around the "smug arrogance" and the "dorky ambivalence."

You're probably asking the million dollar question, "Saf, couldn't your Jew-ass, Hebrew buttocks match that scalper's $2.00 offer.  Isn't that about half the cost of McDonald's kids meal?"

Since all the news is about guns these days... let me put this in terms you Northern WV varmint hunters and Southwestern PA yinzers can understand...

I'll give you that 2 bucks, when you pry it from my cold, dead hands.