Coming off the heels of that nauseating, abysmal Steel Panther test of punishment and endurance, Gigi and I hit up the big Fleetwood Mac show.

It took awhile, but we managed to score 2 freebies.  Arduous but manageable.  One came from a New Jersey woman named Nellie Stillwaggon.  The other from a man in light blue button down shirt.

Earlier, I tried to reason with this group of ladies who had an extra.  Their friend was in the Cleveland clinic and could not attend.  Apparently they thought the spare ticket would be better served, if nicely framed and presented as a gift.  I attempted to persuade them that the woman might be more appreciative if the ticket were actually used but they refused to budge, preferring to eat it.  I tried to reason with them... after all, you could always just xerox one off afterwards.  But noooo, she would require definitive section, row and seat verification for her non-experience.  That sure was an inspired group of ladies - I wish I could have friends like that if I was in the hospital.

They weren't the only ones.  Others opted to dine on print-outs as well.  Yummo, goodo.  Ticketmaster.  Mmmm.  I had this one guy who "threatened" to tear up his extra on the spot, just to spite me.  I sometimes wonder about humanity.  Make that always.  Why would anyone go out of their way to risk their own lives to improve a society comprised of about 25% assholes?  I truly sympathize with those returning from war zones or anyone who fruitlessly toils in the unappreciative public sector.  Time to get off the soapbox.

So we zipped in right at crunch time and scored KILLER seats in the FRONT row, Stevie Nicks side of the stage (our favorite region).

Excerpt from The Office:


The band seemed really energized.  All 4 - Lindsay Buckingham, Mick Fleetwood, Stevie Nicks and the bass player whose name eludes me.  Stevie Nicks seemed genuinely inspired, invoking "fond memories" of Pittsburgh without divulging any specifics.  But you could tell that she wasn't bullshitting.  She likely won't be using the same line tomorrow night in St. Paul, MN.

I thought this show was much better than the Fleetwood Mac 2009 tour opener at Mellon Arena.  The band seemed looser and more relaxed.  There were a couple scattered moments of errant musicianship, a couple jams that went askew, a few drum beats that were a little off.  But I think it made for a more heartfelt, authentic performance.

The woman seated behind us was kind of a pain.  She would occasionally murmur at people to "sit down."  I thought about engaging her, explaining the ins and outs of what happens at a rock concert, but had a modicum of mercy.  Plus, I didn't want to jeopardize our "freebie karma."

Gigi and I have been discussing how we've slowly been evolving into this Beavis and Butthead-like duo outside the concerts.  All these strange, errant comments.  Eccentric laughter and chompy snickering that only we can decipher, yet overheard by everyone.  So of course, once we got inside, we opted for the Super Nachos.  Nothing exemplifies the Beavis and Butthead idiot parade better than a giant tray of nachos setting us back $7.50.

Highlights for me were The Chain, Sara and Gold Dust Woman.  Especially the version of Sara.

During "Tusk," the pelvic thrusts of Lindsay Buckingham seemed a bit excessive, bordering into the blasphemous and obscene...  his Elvis-like gyrations mirrored this bizarre video that's currently making its rounds through social media.  Thank you.  Thank you very much.


As disturbing as that was, I thought it was interesting.  Not amusing, but kind of intriguing as it was definitely rehearsed and likely occurs on what would appear to be a semi-regular basis.  There's even some degree of subdued choreography. 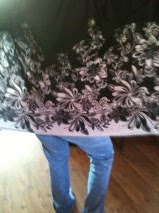 This look is all the rage in Kandahar.  I defy you to name any city that sounds so wonderful and exotic, while at the same time being the embodiment of the worst location on the entire planet earth.   Seriously... give it a try.  You'll always come back to Kandahar, Afghanistan.

After the concert, we ran into a person who shall remain nameless, a Pittsburgh sanctioned, rogue maintainer of law and order -  he gave us some confiscated Fleetwood Mac tour shirts.  One of which we presented to the infamous Nellie Stillwaggon!  That's the woman who gave us her extra floor seat.  We ran into her after the show. 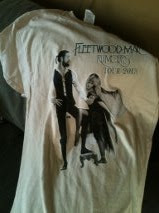 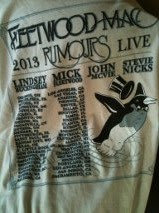 We also had another encounter with Doc Harris (Franco's son).  We talked for a little about the artificially generated stampede and the recent Associated Press twitter hoax that temporarily crashed the stock market.  He looked at me and smiled, "Hey man, I owe you an email."  Well... we shall see.

All in all, twas a great night that restored our faith in music after that atrocious Steel Panther sequestration.

After a show like that, sometimes I think maybe there really is a god.  Well... at least a musical, treblicious god of some sort with tonal leanings.  Now there's a concept I can barely grasp.  Hell... it's a lot better than tsunami-God, ricin-God, Fukushima nuclear reactor-God, Holocaust-God, Boston Marathon-God, Sandy Hook Elementary School-God, and of course... the most vengeful God that will eventually someday be spoken of... artificially generated stampede-God.