Last year around this time, I wrote a book and threw it up on the internet.  It could very well be the worst book ever written.  By "worst" I mean crude, obnoxious, disgusting, repugnant, revolting, putrid, vile, despicable and unrelentingly sickening.  No need to even consult a thesaurus.  Such a resource would never do the description adequate justice.

However, there's some good news!  A book this atrocious is free... of course. 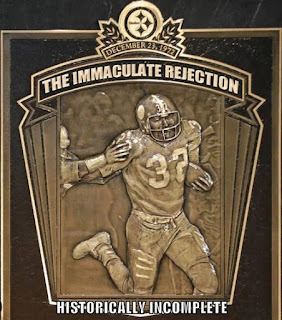 Spoiler Alert: I refuse to divulge the premise or content.  Let's just say that if the Steelers go on a playoff rampage, it will be promoted throughout social media like the Old Testament in a Southern Baptist church, like venomous snakes on the pulpit, like trickling blood stains on the cross... 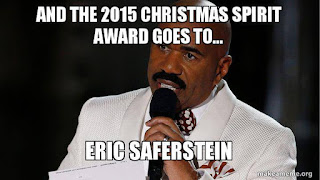 Anyway, if you read the book, you'll discover that the Steelers Sideline Store at Heinz Field is not your only source for officially licensed NFL gear.  I came up with my own line of authentic merch!
But there's a big difference.  Just like the book, my shit's free.  Is it any wonder Art Rooney II hates my guts?


Breaking News: It's the NFL. It's always about the money. Nothing more, nothing less.

So without further adieu, here's some of the featured items in my book AND an exclusive sneak-peak at something new, something different.  No... not a gift box of fruit syrups.  I've termed it "The Horrible Hanger."  But first, let's journey back in time Huey Lewis-style. 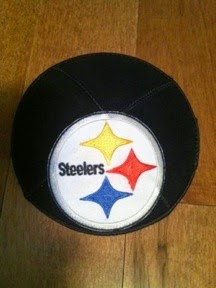 The main character, a 5th grader named Sid from Squirrel Hill, proudly sports this holy headgear throughout the book.  Well, up until the 8th chapter when he has an unfortunate encounter with a holy priest in a Heinz Field restroom. 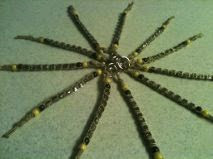 In the event you forget your terrible towel, this nasty whipping device (comprised of 10 Steelers hemp key chains) makes for a fantastic substitute!  Just toss it in a 6"12"6" clear plastic bag and head on in.  Just make sure you adhere to the strict guidelines for stadium entry.

The above link ^^^ represents one of the greatest moments in the history of post-9/11 television.

Let's see.  There's also the Terrible Turban, the Terrible Twat-Rag and the Black'n'Gold Burqa.  I'll refrain from those descriptions.  Sometimes it's best to leave a little bit to the imagination --- a woeful narrative the book refuses to adhere to.

However, I promised you the "Horrible Hanger."  And by the grace of God... here it is. 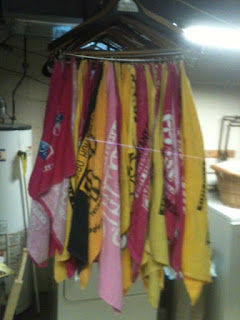 Behold the rich polyester history, in all its colorful glory.  Truth be told, most of these rags were "rescued" from the concrete and asphalt, in and around the the stadium.  And you probably thought the "horrible hanger" was a back alley abortion reference.

I made that contraption a couple weeks ago and it proudly sits in our basement.  It's currently open to ANYONE heading to the game.  Ideally, it will function as a lost and found or as a "give a penny/take a penny" at the cash register.  Towels are an integral part of spectator sports... except on the golf course, of course.  I once found a nice golf towel in the woods at Speidel (hole #8).  Score!  But when I showed it to my buddy, he gave me this look of consternation and said, "Saf, some guy probably used it to wipe his ass."  I gave it some thought and dropped it on the tee box.  Hopefully, twas not the end of that towelie's journey.  Definitely worthy of a GPS locator.

The irony here is this.  In 100+ games, I've NEVER taken a towel into the stadium.  I've smuggled in all kinds of beer, wine, food, recreational accessories, etc.  But never a towel.

It's doubtful the Steelers will get a home playoff game.  They need to win 2 and have Cincy lose 2.  Possible but not probable.  And it's widely speculated that they're currently the hottest team, the one that nobody wants to encounter.  So here's the deal.  This year, I hit up all 8 home games as well as the 3, count 'em 3, preseason ones.  To properly honor the impending playoff run, I will provide a brief description of each. 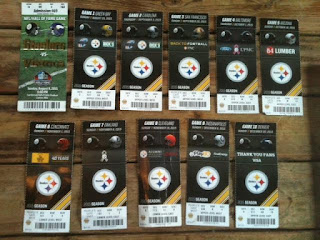 Mad props to the Steelers marketing department... for the most boring, uninspired ticket design of the last decade.  Incidentally, the last time I went to every home game (2005), they ended up winning the Superbowl.  Could it be an omen?  A portent if you will.  Or could it signal the next 9/11 --- a dominipede?  Time will tell.  Time.

Hall of Fame Game in Canton.  Gigi and I took it to the streets.  I even blogged about my extensive travels from that weekend.

The day after my birthday.  Always cool to see Green Bay come to town.

If memory serves me correctly, we left before the half. Why do they always close the preseason against Carolina?  A mystery I've never tried to unravel.

Trouncing victory.  I had a hunch it would be a blowout.  Largely based on the additional 3 days of rest following the Patriots Thursday night season opener.  Factor in the 1pm East Coast time for a visit from the west coast 49ers and you had all the elements for strong showing.  Classic bounceback game.  The only game I paid money for ($40).  Spent too much time preaching, not enough time searching.

Killer night game.  Sponged some nachos off Mikey and Ellen beforehand at Mullen's.  Hung out with the Michael Vick dog protesters for a little bit.  Scored a few extras and sold them accordingly.  Usually, I don't mind getting beat by the Ravens as long as it's a tight game.

We got all the breaks.  They dominated us (time of possession-wise).  Turnovers sodomized them.  I find it amusing how every year without fail, the Cardinals always acquire our cuts and castaways.

Now that one stung.

Had a brief encounter with Browns owner Jimmy Haslam.  Harassed him and his suited-ilk posse about the stampedes for the duration of their walk in between Gate C and Gate B.  One of his cronies said, "I hear what you're saying.  It's like shouting 'fire' in a crowded theater."  What an obliteration against the Brownies.  They truly are the definition of "hapless."  I like that Cleveland comedian who unleashes on behalf of all the season ticket holders.  Funny stuff.

Tickets were everywhere.  Almost 10,000 no-shows.  I've said it before and I'll say it again.  The Steelers have the greatest fans in the world... well, except for one trivial fact.  Thousands of them routinely skip the games.  They just don't show up, especially the night games.  Those that do attend often leave early during the 2nd half.  Guilty as charged that night --- we exited midway through the 4th, just before Antonio Brown had the punt return and straddled the goal post.  Good wine (Free Range Red).  Good time.

Toughest ticket of the season.  Didn't think we'd secure entry but Gigi managed to dig deep and score a couple freebies.  Down at the half 28-10, but I had this strange confidence we'd come back and take it.  Once again, good wine (Cocobon Red Blend).  Good time.


Time for the Ravens game.  Steelers are -10 on the road.  Usually I hate those big spreads but I got a pretty good feeling about today.  Time will tell.  Time.