I can't believe it.  I totally forgot that the world's wealthiest con-artist is returning to Pittsburgh.  Yep... it's Pastor Benny.  And he'll be hosting his routine services at the David L. Lawrence Convention Center.  Three of them.  One of them is an "anointing" service on Thursday morning.  The other two are "miracle healing" services on Wednesday and Thursday.  What's the difference you ask?  I have no fucking idea whatsoever.  Just please don't ask him to cure anything that's visual in nature.  He only does the internal stuff.  Cancer is always a winner.  Unless it's skin cancer, of course (due to the visual detectability issues).

Anyhoo, and I say this with the greatest lament... I will be UNABLE TO ATTEND.  You're all probably thinking - poor Saffy.  Wasn't he the guy who wanted to stage a modern day "tar and feathering" of this asshole?  Then, if that didn't pan out, wasn't he the one who wanted to disrupt the service with some kind of ill-conceived flash mob, air horn protest?  And wasn't he the asshole who staged the Mell-Hinn Arena protest that ended up being the lead story on all Pittsburgh news stations back in 2003?

The last time Benny Hinn was scheduled to appear (in 2011), I broke new boundaries that literally boggle the imagination.  It was my intention to team up with the Chrisagis Brothers and hold our own "miracle healing puppet show" outside Soldiers and Sailors Hall.  This had youtube written all over it, but the minister-schmuck canceled at the last minute.  I've always hoped that someone from the Benny Hinn security apparatus stumbled across my blog and alerted him to the possibility of an attack.  Yeah... right.

But like I was saying, I won't be in town.  So here's the new plan.  I'm going to try and pass a "virtual torch."  Yep, that's right.  I'm asking anyone who happens to read this blog entry (which is probably around 20 people) to step up their game.  It's time for you, the reader, to enter the fray and git'r'dun.

As we all know, our miraculous savior is well known for his bleach-white, exorbitantly-priced Italian suits. 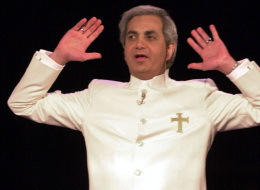 So how about this time, we pelt the fucker with all the colors of the gay pride rainbow?
Sounds like a plan.  And here's how we're gonna do it.


Rather than getting "barraged" with "organic" chalk dust, I chose to hit the Pitt-New Mexico game/Queens of the Stone Age concert, but that's another story.

There's actually some amusing amateur footage on youtube.  I refuse to post anything other than the official video.  It's mostly just a bunch of weirdos, smoking grass and gobbling crick-shrooms.  Others consume complimentary vegan gruel served via unsanitary cement buckets.  But rest assured, all in attendance will engage in the requisite song and dance.  All will spread love.  And some will spread their legs in a futile attempt to stem the declining Krishna population.  But I digress.

So here's my idea.  Head up to the Krishna Palace asap.  The best way is to come in the back exit (properly referred to as an Uncle-Dunkle sneak attack).  Ask around and find out who's in charge.  It's likely a distant relative or child abuse victim of the currently incarcerated Swami Bhaktipada.  If they ask for your credentials, tell them you're friends with Mary Joan.  That should suffice.

Phase 1: Now it's time to gather up all the left over angel dust, chalky-dye, baking soda shit.

Phase 2: Drive up to Pittsburgh.  Do not stop at Primanti's.  Do not bitch about the Steelers 0-2 start.  Do not gripe about Mayor Ravenstahl feeling up a stripper.  Head directly to the Burgh.

When entering the convention center, try to be discreet.  His security is top of the line.  They even use ex-FBI agents.  Let's just say he employs better security than Maury Povich and his goofy lap dog Dave Vitalli with that cranial hair-clump.

Depending on the size and experience of your team, here's my idea.  You can either target Hinn exclusively or storm the stage "Braveheart Bezerker" style.  Either way, let those colors reign down upon that douchebag!  And don't forget to record and post it accordingly on youtube.  A stunt like this would have SERIOUS viral potential.

Afterward, as you're being arrested and arraigned, don't forget to scream, "I'm innocent!  It was all Saf's idea.  That's right.  The devil made me do it.  He's called sonofsaf.  Read his blog."