I normally don't post any of the poetry I write.  Gotta be realistic.  Most of the material is personalized so it normally wouldn't make much sense to the random blog passer-byer.

But tonight is different from all other nights.  Just like Jew-Passover.  It's the big game.  Arrowhead baby.  Releasing the poem would help substantiate my love for the black'n'gold.... or completely equivocate my steadfast devotion.  Keep in mind, I'm quite positive the Steelers organization hates my guts. 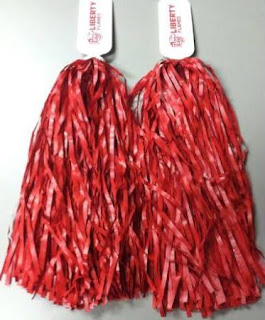 Now... another one of our friends is reporting live tonight from the game in Kansas City.  And as luck, or coincidence would have it, his wife is a graduate of said university.  Well, I came to the realization that I would never have any utilitarian application for these pom-poms.  But I did think they'd make a nice gift for their daughter, who incidentally, might possibly be the most gregariously pleasant, spirited child on the face of the planet.


As the Steelers prepare for Kansas City
We shouldn't be arrogant or overly witty.

The game will be challenging and heavily contested
Since one of our coaches, was recently arrested

Arrowhead Stadium can be a brutal place to play
Our secondary is suspect, with or without Gay

Reliance on the 3 B's... Ben, Brown and Bell
Could be insufficient, from what I can tell

I'm not gonna lie, why even try?
Something will be required... from WPXI

We hear it's gonna be, team Phillips and Loesch
Preferably not shirtless, exposing their flesh

But lest ye not worry
J.T.'s a different story

Now it's not our intention, to start sounding loco
But we could use a little help... from the indomitable Haddie Coco

Albeit the sentiment might appear, a little confusing
Rest assured, it's ironically amusing

That as the Pittsburgh Steelers prepare for a divisional round fight
Our favorite cheerleader will be sporting the red and white.


Obviously, you can see why I don't routinely post these poems.  If you didn't know the characters, they'd make little sense.  Leaving you in a slightly annoyed and agitated state.

So on an unrelated note: after we downed the Ravens in week 17, I forgot to start growing my Steelers playoff beard.  No big deal though.  Nobody gives a shit.

Whatever.  Go Steelers.  And more importantly, go Art Rooney II!  I just can't get over the fact that he's soon to be the poorest team owner.  Embarrassing.  Makes us all look like black'n'yellow fucks n'at.

Saf, what a sweet gesture. And a poem to boot! That was really, really cute.

DBV --- Thanks. If the Steelers beat New England, I'll do a Super Bowl stampede poem and spam the living shit out of it. You really shouldn't be encouraging me!

SAF~The Chrisagii would want me to encourage you! And I don't think the Steelers will beat the Patriots.