I WANT A
FREE
CUP OF JOEL

That's what the sign said.  I didn't bother to snap a picture.  We didn't even use it.  Ended up leaving it in a tree by the upper entrance.

Before heading to the show, we feasted on lukewarm homemade chicken pot pie.  The crust was exceptional.  Carrots... check.  The quantity of chicken was relatively minimal.  Potatoes were slightly undercooked, but that was a good thing.  The peas.  Ahh yes, the peas were omnipresent and bursting with country fresh flavor (Seinfeld).  But the consistency is what it's all about.  Do you hear what I am saying (South Park - Butters)?  And it was near perfect.

When I normally think of pot pies, my mind harkens back to those 50 cent Banquet pot pies.  My mother abhorred frozen dinners.  But for some reason I'll never be able to adequately comprehend or codify, she would let us eat those spherical Banquet concoctions.  These days I actually look at the nutritional information.  Yes - 48g of fat.  Hmmm, the sodium content disclaimer is labeled as "unrestricted."  I don't even know what the fuck that means.

So we ventured down to the arena in lightning-like fashion.  There's always a huge line of cars, but somehow, Gigi manages to bypass everything like a vehicular version of dodgeball.

Dodge, Duck, Dip, Dive, Dodge!  Son, you're about as useful as a cock flavored lollipop!

Free parking as usual at the Church of Black Jesus.  If I ever renounce my skepticism, this will become my church.  And I will tithe the living shit out of it.

We scanned the crowd for extra tickets, but there was nothing.  And when I say nothing, I mean nothing.  Zip.  Nada.  Zilch.  We ran into Scalper Tim and he agreed - the general assessment was very bleak.  But he did end the conversation on a high note.  "You guys will probably get in.  You guys always find a way in."  I humbly nodded in agreement.  But Consol was totally sold-out and there was zero action on the street.

30 seconds later, I spotted an older couple standing against the wall.  I engaged them.  They were a little hesitant, but then Gigi entered the fray and told the man he looked like Tom Bosley.  I shot her the sideways constipated owl look, wondering why on earth would she demean him with this Howie Cunningham fuddie-duddie-father-of-the-year innuendo?  But he didn't seem to mind in the slightest.  After some light banter, he admitted that he might have two extra tickets.  I knew it from the start (scalper's intuition).  Turns out they were from Irwin, PA and his son used to be the production manager for Bruce Springsteen.  Anyway, he had originally purchased tickets for the concert but was also gifted 2 by his daughter.  The alleged extra tickets were at will-call.

So I sent Gigimatic off to seal the deal.  He ended up handing over 2 print-out tickets.  Entirely free of course.  We looked at the receipt total:


I normally say something like Blam! or Ka-Pow! or Sha-Zam!
To make a long story short, I need to come up some new terminology.  Maybe Fig-Newton! or some kind of Wonder Twin slang (Wonder Jew Powers Activate) or maybe the Danno equivalent "Scotchy Scotch!"  For something of this magnitude, I just need to come up with new shit.

I've always liked Billy Joel.  Seriously, how can you not?  There's a few of his songs I could do without.  I never cared for his mid 80's acapella phase (Uptown Girl, For the Longest Time, that annoying jungle boogie song - In the Middle of the Night, blah, etc.).  But the majority of his stuff evokes much emotion.

Who among us has not heard the repeated jukebox version of "Piano Man" at the Alpha?  Over and over, again and again.  All the Wheeling Jesuit kids crooning in drunken unison, "making love to his tonic and gin."  Again and again, until you die or spontaneously vomit in the hallway restroom amid the acrid stench of incest.

So we went inside and hooked up with our friends Doug and Bridgette.  For some reason, I have this really peculiar eccentricity.  I always call girls named "Ingrid" by the wrong name.  I call them "Bridgette."  And the exact opposite is true.  I mistakenly think girls named "Bridgette" are actually named "Ingrid."  Fortunately, there's only 2 women where this problem surfaces (Josh's wife and Doug's wife).  But for the life of me, I just can't get a handle on the situation.

So we went to the seats.  Upper Level 205 Row N.  Let me be blunt, I am not a fan of sitting in the properly assigned seats.  Seriously, it's a fucking rock concert.  Not the State of the Union.

Little did we know there was an opening act.  Some kind of American Idolesque, country boy.  Whoopity Doo fuckin dah.  His name was Gavin McGraw or something.  We looked at each other and decided our time was better spent in the concourse watching the concert-pigeons buy $42 t-shirts.  And to top it off, the t-shirts looked really ghetto.  Some kind of Picasso cubist crapulence.  I'll take the extra-medium, please.  Here's my Discover card.

During the intermission, we headed over to our usual stomping grounds - the best standing room in the house, the overhang of the Captain Morgan Club.  And of course we ran into Franco Harris' son Dok.  Needless to say, there was a healthy dose of stampede talk.  He gets it better than most.  He totally gets the catch-22 and uses all the right words (mitigation, asymmetric, discernible inevitability, malicious intent, etc.).

And if you're wondering what's going on in stampede world,  I'm writing an article for the Risk Assessment Management Society (rims.org - 1,500 words).  But here's the bigger news, yesterday I woke up and checked my email.  There was a brief note from Seth Stone (Oliver Stone's son - yep, the director.  That's the one).   He has a program called lip.tv.  Streams on the internet - mostly conspiracy stuff.  Anyway, he asked what particular aspects of the artificially generated stampede I would be willing to discuss IF they chose to pursue it.  Let's just say I chose to respond.

And I'm going to churn out 2 more articles for the site.  One is an issue I have with the Event Safety Alliance and the other deals with the Paul Ryan response.  That's right.  Mitt Romney's 2012 VP running mate sent me a letter - he thinks I should take up the stampede issue with Wisconsin Governor Rick Walker.  So I did.  I'm still a little surprised he responded.  I'll give him credit - he has more guts than I thought.  I also got a response from another political heavyweight.  Retiring Congressman Henry Waxman (D-CA) who has been around since Watergate --- he thinks I should take my concerns to the California State Health Dept.  Hmmm, I suppose getting trampled to death is a relevant health issue.  After all, I could see how being crush asphyxiated is bad for one's health.  Worse than smoking I suppose.

Alright, the reason you're probably reading this is because you want to hear how the concert was.  I'll sum it up with a word that doesn't exist... ANTHEMIC.  Billy Joel is truly the consummate entertainer.

The highlight for me was the second song outta the gate - "Pressure."  This is one of the best number two songs in the history of live rock concerts.  It's up there with Iron Maiden's "Two Minutes 2 Midnight."  Everyone loves a great opener, but I'm always lit up by the second song.  For me, that's the one that defines the evening.


Definitely one of my favs.  Other highlights for me were "Allentown" and the theme to Bosom Buddies...


Pretty much the whole show.  Even the slower, mushified stuff was spectacular.  Ironically, I'm not a fan of his closing tune "Only the Good Die Young."  I prefer the Iron Maiden version.

And check it out... Gigi scored a copy of the setlist while me and Doc were jammering back and forth about the inevitable trajectory of humanity and technology. 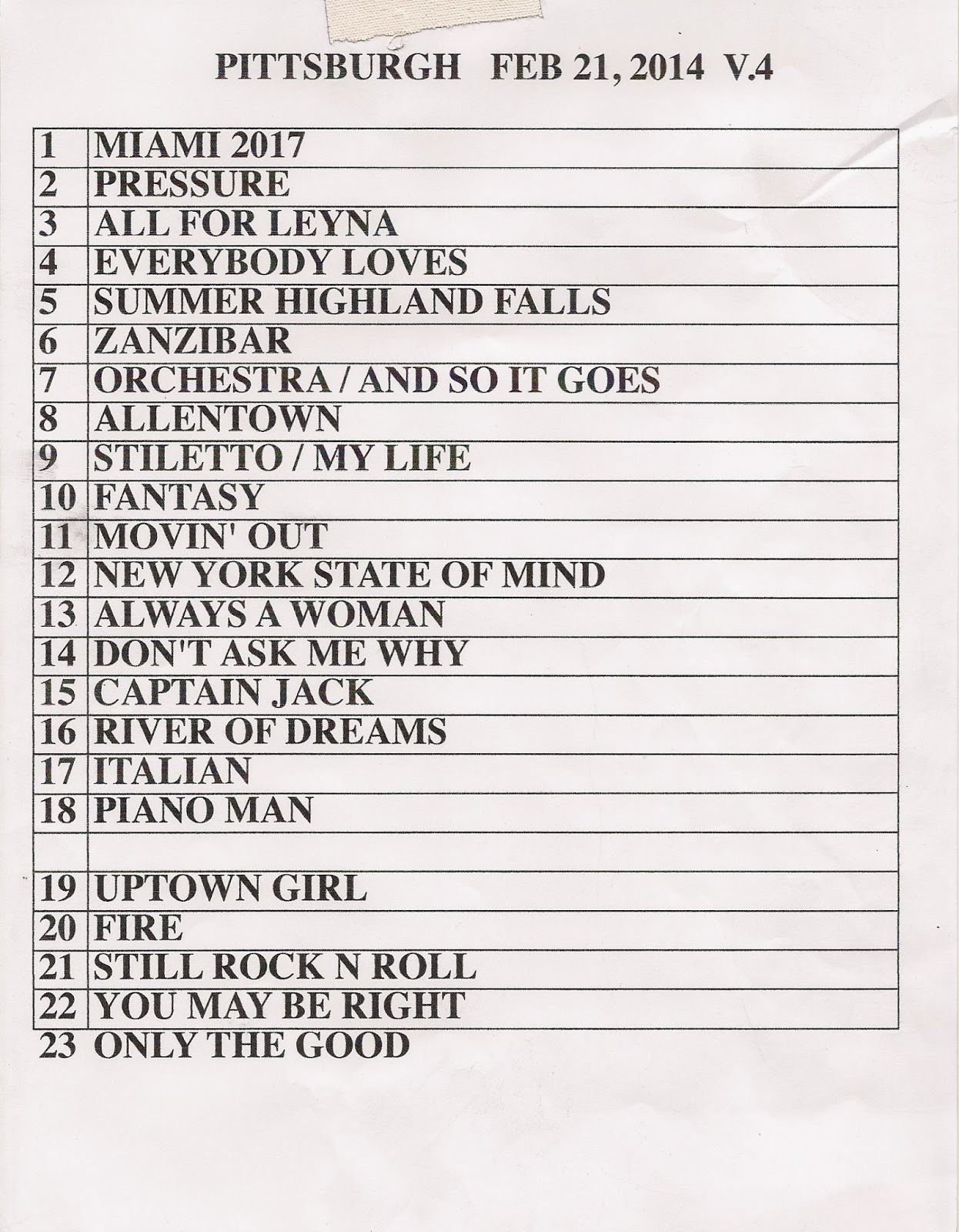 He encored with "Big Shot" too.  But for some reason, it's not on the list.  But I will not stand in judgement.  For he is THE ENTERTAINER.  Well... let's just say he entertained the living fuck out of us last night.

And as for the couple from Irwin, you'll be getting a thank you note and some personalized hemp key chains in the mail.

I completely forgot about Bosom Buddies...
http://www.youtube.com/watch?v=wnabEmFL-yY
Weird how long intros to t.v. shows used to be...1:49 are you kidding me?
The average news story I put together is 1:10-1:30 TOPS!!!
–gig

Yeah, isn't that crazy? I saw the real theme song with the 30 second spoken-word into narrative.

But I was on a high from the concert and wanted to use the cleaner sounding, edited in version, of "My Life" with Billy Joel singing it.

Unknown said...
This comment has been removed by the author.
12:02 AM