I went to a Donald Trump rally in St. Clairsville, Ohio a couple nights ago.  Before you question my political allegiances or mental stability/sanity, please be aware that I go to just about every presidential campaign event within an hour proximity.  This would be my third Trump rally (David Lawrence Convention Center, airport hangar at the Pittsburgh cargo terminal, and now the latest, Ohio Eastern University auditorium).  My primary motivation for attending is to distribute my propaganda.

I've also attended several Bernie and Hillary rallies.  Even a Kasich one.  There was only one where I couldn't muster up the requisite enthusiasm.  Drumroll please.... it was Ted Cruz in Monroeville.  Seriously, can you blame me?  However, I do have incredibly fond memories of his running mate's "drop it like it's hot" stage disappearance.


Reminds me of throwing towels down the old laundry chute. Or when you cash your check in the bank drive thru and the money comes hurdling down at ya in one of those cylinder containers via compressed air.  Swoooosh!

Since this is my third Trump rally, I thought I'd offer a few observations.  Pulling into the lot, the first thing you notice is the carnival atmosphere.  Roving black men selling t-shirts.  Incidentally, with the exception of Secret Service, TSA and local cops, these are the only individuals of color you will see at a Trump rally.  Surprisingly enough, they're kind of boisterous.  Running around from car to car, hustling and yelling...

This is their collective refrain.  Others are hocking hats, pins, lawn signs, etc.  Like I said, it's basically a yard sale/carnie atmosphere.  And guess what?  Yep, the pigeons are out in full force.  They're the most highly coveted market of the commercial sector--- white men aged 25-35.  Impetuous young male adults.  The impulsive ones who will buy anything.  There's a ton of overlap with the Kenny Chesney/UFC crowd.  I collectively refer to them as the "finger lookin' kids." 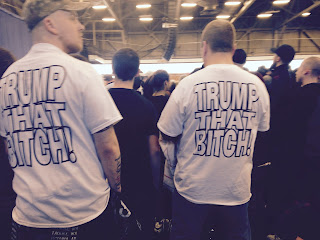 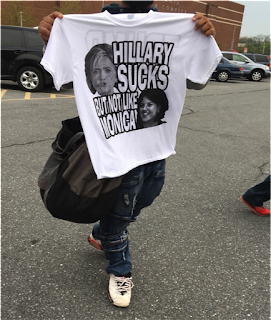 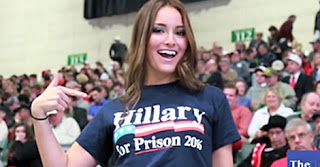 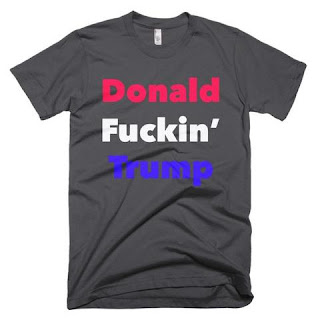 Well... it is red, white and blue I suppose.

For many of them, I imagine it's a deeply ritualistic rite of passage.  To be part of a grassroots movement.  Whatever conclusion you may draw, I'll tell you one thing for certain.  There's a populist camaraderie amongst the Trump crowd.  And it's not going away anytime soon.  The majority seem smitten and star-struck.  Trump is their celebrity hero du jour and he can do no wrong whatsoever.  That's a dangerous combination.

The crazy thing is this.  Ask any diehard Trump supporter if they have any fundamental disagreements on his positions, policy stances or style of governance.  The vast majority will be like... "Uhh, NO!  I'm on the Trump train."  Concerns about statesmanship and tone, waterboarding and torture, his shift from pro-choice to pro-life, from self-financing to asking for political contributions, his disdain for the media... the same media he used to catapult himself to victory in the Republican primary?  And what of his professed love for the military... yet he had 4 Vietnam era draft deferments?  Dick Cheney eat your artificial heart out!

You see, most Trump supporters could care less about his policy flip-flops, flagrant lies or lack of knowledge in economics, politics, world affairs, etc.  They simply just don't give a shit.  And this sets a very eerie precedent... when his supporters are seemingly immune to any thoughtful conjecture or debate.  That kinda stuff happens when you idolize an individual and play the "hero worship" card.  For the average Trump supporter, The Donald can do no wrong.  And he'll never have to issue an apology.  While this unhinged zealotry may appeal to his supporters, it tends to frighten the majority of the voting population.  At least I would hope so.

Something else to keep in mind.  Even though Hillary and Trump both have high negatives, I honestly believe that Trump is the candidate who can do a better job of acquiring new voters.  Seems to me that Hillary's popularity peaked long ago.  Whereas, Trump can flourish off any future events that are deemed as anti-government or anti-establishment.  That's a pretty big menu for success and a recipe that's really easy to spin.  Screw the high negatives.  If you're Donald Trump, it almost pays to embrace them.

So exactly what could secure a Trump presidency?  Well, there are an abundance of hypothetical scenarios.  But I think you know the one I'm talkin' about.