Could the purchase and restoration of one house in Pittsburgh, Pennsylvania... prevent the next 9/11?

Like many other couples, Gigi and I have been searching for that perfect home.  And we finally found it!  It's a three story Old Style house on the city's scenic North Shore. 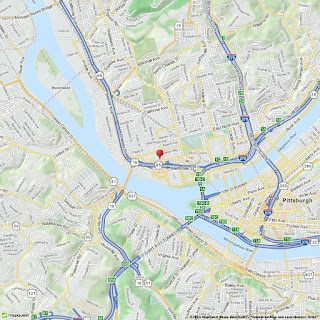 As if downtown Pittsburgh isn't a memorable sight.  Walk out the front door and prepare yourself for spectacular views of the Point State Park fountain and the upper tier of Heinz Field.  Behold the confluence of not one, not two, but three rivers.  Bridges galore and more interstates, interchanges and intersections than you could possibly fathom.  In keeping with that sentiment, you can even hop in your car and make the quickie trek to Intercourse, PA.  Afternoon delight.

Unfortunately, the house is currently vacant and in need of a complete restoration. It precariously sits between a dusty warehouse and a Taco Bell.  A short walk to the Rivers Casino and you'll likely gamble away next month's mortgage payment.  A rusted guardrail separates the house from the Allegheny Police Headquarters.  Now let's throw in a few panhandlers, some occasional gunfire, a ton of cigarette butts and the perpetual screeching of the train tracks.

Trust me.  Aside from the notion of Bill Cosby purchasing some quaaludes in the backyard alley, this ain't the Huxtable residence.

Suffice to say, the house is admittedly different.

So if we did buy this place, how on earth would it prevent an asymmetric national security disaster?  Now that statement requires a little bit of explaining.

You see... we want to turn this house into the AGSAF Museum.  AGSAF stands for Artificially Generated Stampede Awareness Foundation.

Now you're probably wondering, "what the hell is this guy talking about?"

Okay, here's the deal.  On game day, every NFL stadium has 50,000 - 100,000 active cellular devices.  Considering the current state of wireless hyper-connectivity in every venue, the time has finally come to tell fans the truth.

People have a fundamental right to know...


that if they are in a large, confined crowd and receive an evacuation order  and/or panic-inducing information from their cell phone or mobile device...

it's almost certainly a malicious hoax designed to create an artificially generated stampede.

If a stadium emergency evacuation is deemed absolutely necessary, incident command uses the public address system in tandem with the video monitors.  Because it's imperative to deliver a clear, unified, all-encompassing directive.  You do NOT use cell phones to evacuate large, confined crowds.  You do not play texting games with mega-throngs.  That's just not how it works.

Sounds pretty simple and straightforward.  Regrettably, nobody's allowed to talk about this generic safety issue for a variety of reasons: plausible deniability, foreseeable litigation and the lose-lose proposition.  But there's an even bigger dilemma.  Acknowledging the problem raises the notion of killing people without conventional weaponry.  A terrifying precedent in the realm of generational warfare.  It's the prospect of weaponizing a human stampede --- a black swan event that would irreparably alter the course of humanity.

I know all of this sounds really scary and even a bit conspiratorial.  However, it's actually quite simple.  It all boils down to the modern, technological equivalent of shouting "fire" in a crowded theater.  Nothing more, nothing less.  And just for the record, it's probably not one stampede.  It's likely in the range of 8-10 stampedes.

Obviously, this is not an acceptable outcome.

So that's where we come in.  What better a location to break ground on the first museum of its kind?  Directly in the shadow of Heinz Field.  An arsenal of wisdom and knowledge dedicated exclusively toward the prevention of the next possible 9/11 --- a dominipede (multiple, simultaneous human stampedes likely impacting the NFL 1 o'clock slate of games).


And it would provide the ideal setting for my book signings: 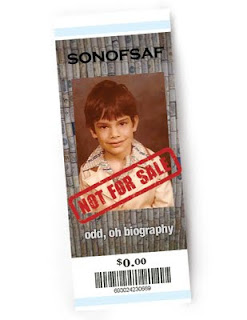 Sonofsaf: odd oh biography is an autobiography.  Go figure!  A lifetime collection of comically debilitating short stories circa 1970-2011.  You'll find the circumcised perspective of an atheist Jew from West Virginia to be both uplifting and traumatic.  Joy and pain.  Sunshine and rain.

His heartfelt observations on a wide array of topics: art, labor, leisure and music will take your breath away.  His thoughts on people, politics, religion and sports will leave you gasping for air.  His ominous predictions will suck the life right outta yer lungs.

For Christ sake, enough with the innuendo.  The book's about an undiscussable national security issue --- artificially generated stampedes.  Give it a shot.  If anything, it's free. 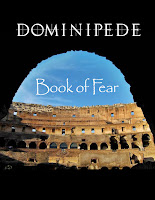 Dominipede: Book of Fear is the explicit prediction of an unfathomable future event.  An incomprehensible disaster surpassing the scope and magnitude of 9/11.

The entire NFL 1 o'clock slate of games will be impacted.  But it was all just a malicious hoax.  Everything was based on a lie.  Society will be transformed.  Everything will change. 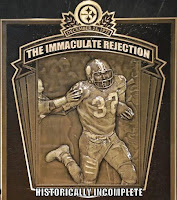 A few months ago I wrote a book.  Soon after, I became the most reviled Steelers fan in the history of mankind.

The Immaculate Rejection is the disheartening game day tale of a Pittsburgh 5th grader wishing to improve stadium safety.  An overly optimistic Jewish boy from Squirrel Hill tries to shed light on an undiscussable subject --- the prospect of an artificially generated stampede at Heinz Field.  But nobody wants to listen.  Sid and Miss Priddy find things quickly spiraling out of control, resulting in what many will come to view as the next 9/11.  Based on a true story... and a black swan.

NFL Commissioner Roger Goodell and several billionaire owners want this book "removed" from the internet but cannot acknowledge its existence.  Quite the conundrum.  Making matters worse, the book is free.


So whadda ya think?  Let's fix up this house, stave off disaster and help make the world a better place.  Also, we need more room for the dome hockey and foosball table.