Gigi and I made a relatively last minute decision to go see David Cross.  Probably the funniest comedian who reminds me of myself.  Strangely ironic that I have NEVER seen an episode of Arrested Development, eh?  My only knowledge of the man comes from a single CD he released in 2002 entitled "Shut Up You Fucking Baby."  It came out right on the heels of 9/11 so the material gets pretty contentious.  I'm not much of a "comedic connoisseur," but this is probably the funniest thing I've ever heard.  Definitely in my Top 5.

The show sold-out a while ago, but knowing our penchant for unorthodox ticket acquisition, we made the trek over to stunning Munhall (inner Homestead right on the cusp of Matzoh Ball Soup territory a/k/a Squirrel Hill).

Although I do not know the man, we do share a common ancestry --- that being Atheist Assholic Jew Fuck.  Kind of a warped lineage I suppose.  Like I said, we don't know Cross personally , but I imagine he'd appreciate our increasingly "lighthearted, passive aggressive" panhandling style.  However, on this occasion, we paid the 40 bucks.  Oddly enough, they turned out to be "his" tickets.  Likely ones he had reserved for family and friends.  10 rows back, dead center.

Unfortunately, the guy sitting next to Gigi had this rampant, mutant B.O.  Yep, right outta Seinfeld.  He was one of those hipster dufii, bearded lumberjacks that defiantly reject the conceptual nature of deodorant.  Who knows, probably had a beef with Proctor and Gamble testing their products on defenseless bunny rabbits.  The scented, arm-pitted wrath wafted upon those all around us.  It was the kind of olfactory stench that gives you this dulled, boorish headache.  Pure and belligerent.  Unrelenting.  Permeating deep into the cerebellum.  So you try to breathe exclusively through your mouth.  Then it becomes, inhale through your mouth and exhale through your nose.  Then, you just give up and realize that you're attending the Pixburgh equivalent of a religious pilgrimage in Southern India.

Cross came out on stage with a local tribute to Primanti's.  I've always thought this makes for decent fodder.  What's up with the sacred yearning to throw a heap of coleslaw and some relatively burnt fries directly onto the sammich?  As if the act itself inspires culinary heroism.  And why do the yinzers celebrate accordingly?  As if it was the combined resurrection of Myron Cope and the adult circumcision of Bill Peduto.  Cue the towel waving.

Just an aside, David Cross looks (and even sounds) like my buddy Paul Clune.  They both have similarly resonating vocal chords.  Even their speech pattern and inflection.  Strange indeed.  Here's a pic of him and Jessarooni.  Judge for yourself. 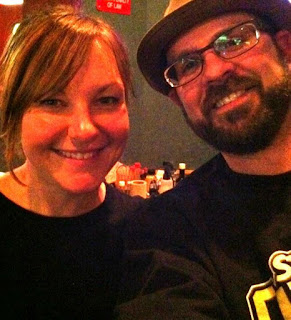 I admire Cross because of his real-world, storytelling delivery.  It's one thing to tell jokes and one-liners.  It's entirely another to relay poignant stories.  He knows the difference.  Sadly, half the population doesn't get it.  All they like is knock knock, priest-rabbi-Chewbacca walk into a bar, or kick to the groin action sequence.  Yeah, those are funny too.  In an urban Hee-Haw setting I suppose.  Just ain't my thang.

The opening piece was pretty strong.  A tattoo parlor in California whose motto was "you get what you get."  Probably not the best slogan for memorializing the tragic death of your 6 year old daughter who fell prey to a senseless act of gun violence.  Well, it is what it is.  You get what you get.  As far as tattoos go, I've noticed how the general population has grown increasingly serpentine and amphibious.  After all, twas was the great Maury Povich who once asked a guest, "You're a lizard, aren't you?"  I've often toyed with the idea of getting the first ever inverted cross, male tramp stamp.  Hey, if there's room on this planet for all those disturbing depictions of the cruxifiction.  Well then, Saffy should be allowed to sport some sexy demonic ink of his own.  What's right is right!

A much better bit --- his harangue about the "culture of hero worship" surrounding the Founding Fathers.  Cross went off on the current Republican brand --- the incessant, mindless repetition of constitutional infallibility.  The judgement of the Founding Fathers will NOT be questioned.  Never!  Ever!  Despite the fact that many owned slaves and held archaic views about women's rights, civil rights, really any rights.  But if you like freedom... and most of us do, how fucking dare you besmirch the prevailing integrity of our country's forefathers!  Seriously, I'd like to see Ted Cruz dawn one of those creepy wigs.  If they truly wish to inspire the faithful clods at the Republican National Convention in Cleveland this summer (we'll be there on the protesting periphery), then put yer fuckin' wig on and git 'er dun.


So the time seemed right to re-enroll in school (West Liberty State College) and finish my degree.  But I still needed a job.  Enter the famed West Virginia Troopers Association and their notorious Bears Against Drugs program.  This was nothing more than a glorified telemarketing organization which sold "holiday inspired gift assortments" manufactured by a company called Smoky Mountain Secrets based out of Knoxville, Tennessee.  When selecting which gift box, the options were plentiful.  The jellies and preserves were the most common choice.  Not a fan of gelatinous substances or even speaking the word "jelly," I would normally push the steak sauces and seasonings.  This seemed more conducive to the overall sales pitch.  Other options included overpriced mustard, costly salad dressings and the much heralded fruit syrups.  Despite all the exquisite culinary choices, the entire operation was barely legitimate.  I wouldn't call it a complete scam though.  At least you got some jars of jam.  I spent over 3 years calling residents throughout northern West Virginia and Eastern Ohio.  Between carrying a full class load, working about 30 hours a week and partying my ass off, it was a rough ride.  But observing employee behavior helped see me through.

Most of the employees had the ability to speak extemporaneously, but from time to time they'd hire someone who could neither read nor write.  Our boss had a simple hiring policy.  Keep all the phones manned and push the shit out.  One memorable employee was this guy Neck Tattoo.  Neck Tattoo was very passionate but incapable of reading the fallback script.  And his communicative abilities were noticeably subpar.  Occasionally customers would pose the question, "Where does the money go?"  This was an edgy question because the entire operation was always under legal scrutiny.  When confronted with "what do you do with the money" here was the preferred response... "Some of the proceeds are used to purchase small teddy bears.  We place them in all the troopers' cruisers so if they come upon a child who has been traumatized in an accident, we can give them a teddy bear.  Ma'am, just clutching that teddy bear helps calm and reassure the child until a professional can tend to their emotional needs."  Keep in mind, this response was for people with minimal communication skills.

Well, during his brief time with Bears Against Drugs, Neck Tattoo was on the receiving end of the infamous "where does the money go" question.  I was seated nearby.  Let me do my best to recreate the conversation.

Elderly Woman:  "I'm just curious.  What do you do with the proceeds?"

Neck Tattoo:  "Yes ma'am, the money goes to the troopers."

Elderly Woman:  "Could you please be more specific?"

Elderly Woman (speaking in a frail tone): "I don't know what you mean."

An agitated but confident Neck Tattoo: "Yes ma'am, they give 'em Hug-A-Bear.  It makes 'em understand."

Neck Tattoo (lurching into the phone):  "Hug-A-Bear!  They get Hug-a-Bear!"

At this moment and utterly clueless, the frightened elderly woman chose to hang up.  A flabbergasted Neck Tattoo turns to me and says, "The bitch didn't want no jellies."

Another employee was the reclusive Whiskey Thermos.  Whiskey Thermos was an ill-tempered man.  He had an unusual demeanor.  Calm and reserved yet prone to excessive and disconnected cursing.

But one shining moment really stood apart from the rest.  His daughter had come to pick him up at the end of the night.  "He looked at her and casually inquired, "Why you late you daughter clit bitch?"  Was the genitalia reference necessary?  Yes, for him, I believe it was.

The Bears Against Drugs operation folded the following year.  I got the impression that similar programs elsewhere came under attack from the attorneys general of neighboring states.  So I took all this acquired wisdom and experience and set out on my own.


The David Cross tour was aptly entitled "Making America Great Again."  I wish he'd more thoroughly explored this angle.  I have a hunch he will as the dates progress.  Obviously, his tour was designed to coincide with the Republican presidential primary and beyond.  Great timing!  The material is literally cuming to a theater near you.  Spewing itself forth, courtesy of Fox, MSNBC and CNN.  Like stained, unwelcome ejaculate on the comforter.

The show ended semi-abruptly.  Reminiscent of the Chris Christie presidential campaign.  Who could've possibly fathomed that he'd reemerge?  Lending his endorsement to Trump, of course.  Who woulda thunk it --- from one titanic loudmouth to another jag-off blowhard.

After the show ended, we could have talked to him outside and maybe gotten a photo.  But I don't normally do celeb pictures.  Except this one.  And when I do, it's usually not a good omen for those involved.  Poor Mr. Vedder.  I doubt he fathomed having to deal with my stampede shit.  Hey, we all gotta pay our dues.  Such is life. 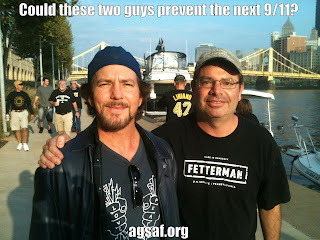