A few years ago, the NFL moved up the kickoff from the 30 yard line to the 35.  The premise was sound.  There would be a greater number of touch backs.  Hence, less injuries and spine-snapping, neck-twisting collisions.  Hey let's be honest.  These guys flying down the field are considerably more dangerous than they once were.  Faster, chippier, steroid-infused, seeking dollars, glory and adulation beyond your wildest, artificially-turfed dreams.

I remember back in the early 90's when the NFL adopted the 2 pt. conversion option for touchdowns.  This was likely one of the best decisions the league ever made.  Because it infinitely increased the level of scoring intrigue.  Making close games and comebacks possible.  Everything got vastly more entertaining.  I don't think anyone would dispute that.  Except maybe some diehard, leather-headed descendant of Knute Rockne.

But could there exist just one more alteration to the scoring rulebook?  I believe so.

I call it the extra point kickoff. 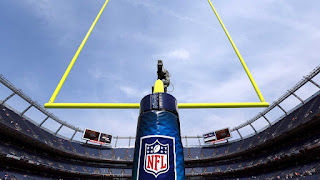 It's pretty self-explanatory.  If you manage to split the uprights on the kickoff, it's worth a single point.

Here's a top-10 list of why this works on so many levels:

1.  Just like the concept of the 2 pt. conversion, it adds that additional element of scoring.  Especially in the case of a tight game in the closing seconds with a 1 pt. differential.  Contrarily, the only current option is the onside kick.

2.  You know when the defense gets tagged with a personal foul during a touchdown (unsportsmanlike conduct, unnecessary roughness, giving the "suck it" and so on)?  These fouls seem increasingly common.  Why?  Because the 15 yard penalty is always assessed on the following kick-off.  There's no automatic first down so the downside is marginal.  The kicker usually boots it out of the end zone regardless.  Consequently, it would give the kicker a more credible opportunity to score a lone point.

3.  It expands the field.  Kickers almost always launch an angled, directional kick towards the right or left corner of the end zone.  Makes sense to me.  That way your special teams coverage team can narrow the lanes.  Kicks to the dead center are riskier because it opens up the entire field.  It gives the return man more options.  With great risk, comes great reward --- Thomas Jefferson

4.  Fans, particularly Steelers fans, seem to have difficulty getting back to their seats for the start of the 3rd quarter.  Instead they prefer to argue with some douchebag about the messy ketchup dispenser.  Or maybe it was the asshole from Crafton who stole all the napkins.  He needed to wipe the crusted snot from his son's schnoz.  His child's affectionate nickname?  Yep, you guessed it.  "Booger."

This would ultimately give fans more of an incentive to be attentive.

5. The cold weather angle.  A football usually travels further in warm weather, as opposed to cold outdoor stadiums.  I imagine this would give an advantage to the climate controlled domes and Southern cities.  Obviously, such a rule would favor the thin air of Denver and the teams who end up playing their yearly regular season game in Mexico City.  This brings another interesting variable into the game.  If anything, it makes for some tantalizing pregame banter, talking points and analysis.

9.  Boink.  Doink.  Cunk.  Konk.  These are the most feared, distinctive sounds of the game.  It's not the violent grunts or the smash of helmets.  It's the consequential deflection off the uprights or the crossbar.  A 500 lb. female telemarketing guru once said... "You know you want it.  You know you can't have it.  Cuz it's good."  A sassy reference to the venerable meat curtains of her sprawling sexual chasm.  It's either in or out.  Bad or good.

Anytime a football hits the post, it's a good thing.  On the dome hockey table, we call it "postage due."

10.   Football can be a cruel game.  Especially when a team scores a touchdown at the end of the 4th and likely ties it up.  But then the kicker dude misses the extra point.  Sometimes it's not even his fault.  Maybe the kick got blocked or the snap was flubbed.  But the blame will always be on him.  And dying in your beds, many years from now, would you be willing to trade all the days, from this day to that, for one chance, just one chance... 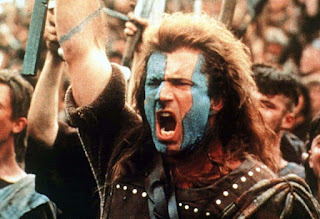 to make everything copacetic.  Check out the mulletted meathead in the opening seconds.  I think wifebeater wants to go crowd surfing... but his buddies can't pull off the lift. 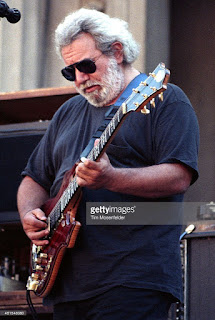 If you think any of this makes sense, check out my comprehensive guide to the NFL.
It's free. 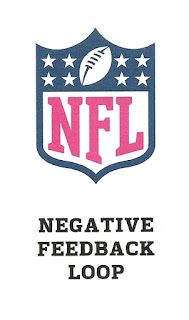 
Since I'm all about predictions (although admittedly, most of them are doomsday apocalyptic versions of Armageddon), I thought I'd fill out an NFL playoff bracket.  Replete with scores, commentary, jinsight and joughts.  That's Jewish for insight and thoughts.

Let's kick things off with the wildcard weekend.

Gotta go with Andy Reid and the Chiefs at Arrowhead.  Home field advantage is big.  This 4:30 pm start will be cold and loud.  KC is finishing the season on a winning note, as opposed to the Titans, basically sneaking into the playoffs by default.  They just have more offensive weapons and defensive play makers.

Looks like a shoot-out is in store.  Rams have looked strong at home in the half-empty Rose Bowl.  I suspect the bandwagon fans will venture to Pasadena in droves.  But most of these fans don't really care about the team.  They just want to be part of something, like porn stars, trying to make it big in the movie industry.  I think the Rams and their innocent head coach Sean McVay have had a good run.  But I also think they're one and done.  And kicking problems are never a good thing in the playoffs.  Falcons on the road in a heartbreaker.

Ahh... the Drew Brees vs. Cam Newton show.  Since owner Jerry Richardson stepped down, the Panthers are literally a one man show.  That might work in Charlotte, but not in N'Awlins.  I think Brees lights it up in the dome.  Saints spread the ball around well and have too much offensive firepower.  The greater the number of points, the greater amount of drunken crowd noise.

So.... onto the divisional round and the predictive spreads.  All the home teams would be favored.

Belichick gets smoked in the divisional round.  If the Chiefs can get a couple turnovers and control the clock, I think this upset is very much in play.  The Patriots, aside from Brady and Gronk, just really don't have the talent anymore.  They have the requisite coaching, but the players on the field have the final say.

Drew Brees defies the critics and picks up a big, outdoor win in the cold of Lincoln Financial Field.  Remember, the kid used to play for Purdue.

Everyone will be yapping about the potential for a turnpike Super Bowl.  But Sean Payton spoils the party.  And finally... it's the battle of the black and golds.  Roethlisberger gets the win, praises the lord and opts for retirement.  Antonio Brown the MVP.  And JuJu forms a  alliance with JewJew. 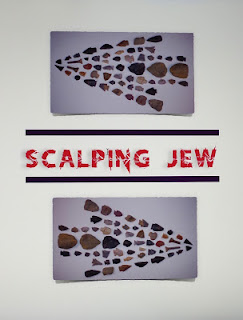