Fortunately, the good people of Dark Star Orchestra were kind enough to recreate this "gem."  I use that term loosely.  Because my taste in the Dead is VERY specific.  I only listen to 1985 >1990.  Generally speaking, I have a low tolerance for early 1970's stuff.  The sound is just way too dreamy.  There's virtually no punch, no cohesion to the set lists of that era.  Everything meanders around like a dumbshit seeking a license renewal who shows up at the West Virginia Dept. of Motor Vehicles with no identification.  You'd think a library card in tandem with a Golden Chopsticks frequent lunch special ticket would be ample proof of your identity.  You would be mistaken.  Identity theft is serious shit.  Even if you're some toothless, backwoods hick from Sistersville.  But I digress.

Amanda drove this one.  Payback for the slew of Starlake concerts I hauled her to in 1999 or 2000 or whatever summer that was.  A decade ago, Amandasar was my scalping protege.
My favorite tale of lore... In 2003, we were at a Poison concert.  We're in our usual position, milling around at the top of the steps by the main gate.  The police were in the act of arresting some miscreant.  As the guy was cuffed and being led to the cruiser, Amanda stepped into the fray...

Amanda: "Excuse me officer, is he going to the concert?"
Pig: "No ma'am.  He's going to jail!"
(Keep in mind, this guy has blood streaming down his face.)
Amanda:  "Well, if that's the case, can I have his ticket?"
Pig:  "Uhhh, I dunno.  That would be up to him."
Bloody dude: "Yeah, she can have it.  It's in my back pocket.  I can't get to it.  My hands are cuffed"
Amanda:  As she physically reaches in the guy's jean pocket and extracts the ticket.  "Thank you very much!"  (Jubilantly holding the ticket high in the air) "Look Saf, I just scored a freebie!"

The only thing missing was a cartoon caption that read "YOINK!!!" (during the ticket extraction process).

It was at this precise moment...  I knew that "student had become teacher."

Sato: [smiles at Miyagi] Your student become my teacher.
[shouts] Sato: O-bon will be held in castle, now and forever! [Cheering. Sato and Daniel shake hands]

So back to last night... 10 years later in 2013.
Accompanying us was another Wheeling couple, Holly and Jimmy.  They were kind enough to surrender shotgun and we pulled out around 6:30 pm.  I regaled everyone with the routine discussion of stampedes and death by crush asphyxiation.

So we got turned around a little bit.  Never a good idea in Homestead.  Even gun toting Ted "Nutella" Nugent would be scared of this kill-zone.  Not a huge deal though.  We made it into the venue pretty much as the band took the stage.  From the early notes of Truckin', I immediately sensed it was going to be one of "those" shows (super early, hippified 70's).  A lengthy Sugaree confirmed my suspicions.  Glancing at the set list, I think my personal highlight was "Me and My Uncle."  Kind of an odd choice considering the Dead used to play that song ad nauseum.  The "Big Railroad Blues" took me back to a 1992 summer Starlake show.  That may have been the only time I heard them play that tune.
Two of my favorite Dead tunes are "Loser" and "Deal"... but not these early, exhausting renditions.


Strangely enough, the original show may have coincided with my birthday which falls on August 1.  I could envision that concert in the Yale Bowl lasting well past midnight.  I'm sure the ivy league hippies of the Nixon administration would have concurred... it was a long one.  So anyway, you might consider this a potential birthday miracle show.  Dare to dream...
But alas, there would be no miracle ticket last night.  I paid the full $25 admission fee.  I'm okay with this.  DSO is worth $25.  Though at the $30 mark, I'd start to get a little squeamish. 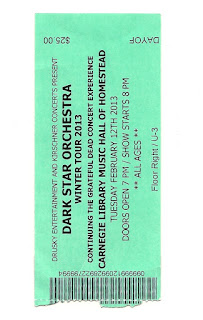 When it comes to concerts, I'm usually a big fan of the old school theaters.  I enjoy the acoustics and the throwback setting.  Makes things vastly more entertaining than a concert at the newly refurbished, excessively vacuumed Wheeling Island Ballroom.  But the staff were just too obtrusive.  They're a little aggressive when it comes to shining flashlights and admonishing people for standing in the aisles.   It makes you wonder how they act when there's a hard rock band.  I gave serious thought to hitting up Queens of the Stone Age when they came there a few years back.  I have trouble envisioning how that crowd would've functioned.  Old lady ushers desperately trying to squelch stage diving and mosh pit antics?  That's a recipe for disaster.

I had a good time, but in retrospect, I might finally be done with DSO.  Unless I can be assured in advance they'll play a show from the late 80's.  But as we all know, when it comes to the magic spontaneity of the Dead, or in this case, DSO... 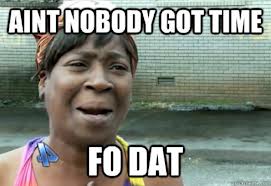 
Saf, what the fuck?  Are you kidding me?  The New Jerk Highlanders?  You really think they could win the Stanley Cup in 2013?


Well perhaps.  But give me a chance to explain.

First and foremost.  The Islanders aren't playing in this colossal dump anymore. 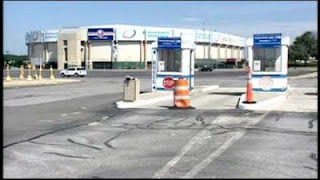 That's a picture of the Nassau Veterans Memorial Coliseum.  If ever a venue needed to be memorialized, this is it.  You gotta love the dented orange barrel out front.  I used to really enjoy knocking those things over on the way out of Starlake.

So yeah.  That's right.  They made the move from the central Long Island to some splashy new digs in Brooklyn.  The brand new Barclays Center is ranked as the most glitzy, decadent arena in the NHL (and possibly the United States).  Sorry Pittsburgh fans.  I realize that's not very consoling.

Check out this place. 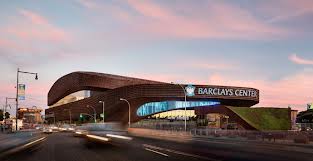 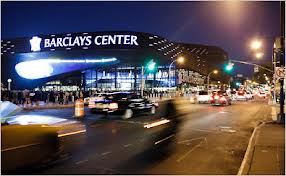 I don't think it takes those Penn and Teller Super-Focus glasses.  If you can't see the transition and acknowledge that it's a new day for the Islanders, perhaps you'd be better off pledging your undying allegiance to the Wheeling Nailers.   And the inside of the Barclays Center has more luxury boxes than fracking wells in the state of West Virginia.  They serve sushi, lobster rolls, caviar, cognac... You name it, they got it.  Much better than the Wesbanco Arena menu featuring soft pretzel, hot dog and Bud Light.

And not only is it completely over-the-top, but it's the brain-child of megalomaniac, hip-hopper Jay-Z.  He's pretty much the owner/boss/manager.  If you're unaware, he's married to the superstar Beyonce.  I think she just had his baby.  So Jay-Z is also baby daddy.  Beyonce just finished up with the presidential inauguration (albeit lip-synched) and is half-timing the Superbowl tonight.

Now if you know me, you know one thing for shizzle.  I'm the last person who gets all gizz-jazzed up over the psycho-celebrity culture which is America.  I can't even tell the difference between a John Corbett and a Mr. Big (somewhat true).  I can't tell the difference between Liza Minnelli and licorice minestrone.  And just if you're wondering... the answer is yes.  Gigi and watched Sex in the City II last Sunday.  Honestly, it really wasn't that bad.

So back to the Islanders.  They were listed as second to last in the NHL Stanley Cup race.  Last place is the Columbutt Blue Jackets at 150-1.  The Isles were listed at 75-1 or 100-1.  If you're curious, the Penguins and other top teams are usually somewhere in the 8-1 or 12-1 range.

But hey, this is an abbreviated season.  So I think it lends itself to a young, upstart team getting hot early and going on a streak.  Plus, it's the NHL where just about every team makes the playoffs.  So once you're in, you got a shot.

Disclaimer:  I'm not really a big hockey fan.  I catch some of the regular season games... but I'm hardly an addict.  And I almost never analyze or read NHL news.  I have a hard time taking professional hockey that seriously.  Well, until the playoffs start.  How pathetic - I'm a playoff band-wagoner.  At least I'll admit it.  And for the record, I'm also not a wannabe who rushes to Dick's and blows $100 bucks on a knock-off Crosby jersey (lame).

Another thing, I was checking out the attendance figures.  When the Islanders were playing in the Nassau Veterans Memorial Coliseum, they had some of the worst attendance figures in the league.  But right now, they're even outselling the New York Rangers at the Garden.  Not by much, but isn't that special. 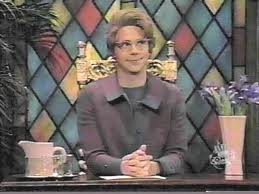 The Barclays Center is the biggest, new hot spot in New York City in all da five burrows.  I checked out some of the upcoming shows.  Multiple Gaga's, a couple Rihanna's and even the Beibs is coming to town.  And there's a ton of New Jersey Nets games too.  Lest ye forget.  They relocated as well.  East Rutherford can suck it.

My point is this.  With Jay-Z being a self-professed playa and all, I doubt he'd have much tolerance for a habitually losing franchise.  I think it's reasonable to assume that he wants to remake the Nets and even the Islanders in his glorified image.

I know it's early, but the Islanders are at the top of the standings.

And I think everyone would agree that the Atlantic division is the toughest in the NHL.
So yeah, maybe the Islanders could be a decent long shot.

And while I don't participate in illegal gambling anymore (with the exception of purchasing 2 $5.00 squares on G Max's crappy Superbowl board - he gave me great numbers).  Look at this shit.  I got 2,9 and 2,5. 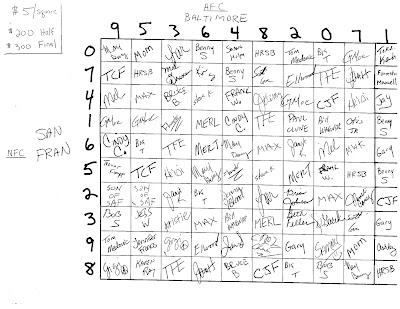 Better yet... how about an all-field goal Super Bowl?

Honestly, I think there's a better chance for an artificially generated stampede.

One last thought... there's some guy from somewhere who submitted one of those homemade SuperBowl commercials.  It's for a Doritos contest.  This dude looks exactly like a younger version of Wheeling's own Jeff Radosevich.  Judge for yourself.

I stole this more current picture of him off facebook.  Not sure of the circumstance, but it's him with mayor Bloomberg. 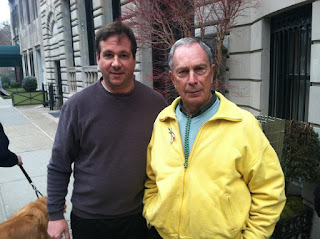 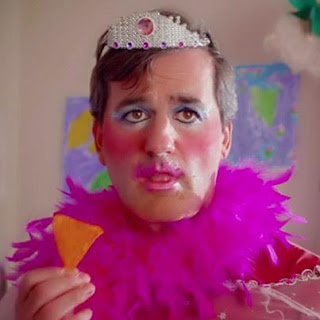 INSANE.  He currently loves in NYC, so this ties nicely together with the whole Islanders/Brooklyn crap.

Hope everyone enjoys the game tonight.  And I'm on record for this.  It is morally acceptable to root for the Baltimore Ravens.