What if Trump wasn't elected in 2016?  Well I assume Hillary would've been installed as Commander-in-Chief.  Makes sense I guess.  The citizens of the United States would have simply opted for the other option.  A professional bureaucrat with a calculated temperament.  Someone who inspires measured confidence.  Someone willing to carry on the Obama legacy.

Anyone remember the Bizarro Jerry episode where he woke up in an alternate universe?  Kramer had a 9 to 5 job in corporate America.  Jerry was dating a woman with "man-hands."  George was seeing models.  And Elaine was hanging out with a new crowd of mentally stable, vanilla individuals.


But like I said, if you really seek a Bizarro Trump alternate universe, it definitely wouldn't be Hillary Clinton.  The closest approximation I can offer up is our spiffy Jewish politician, former New York Congressman Anthony Weiner. 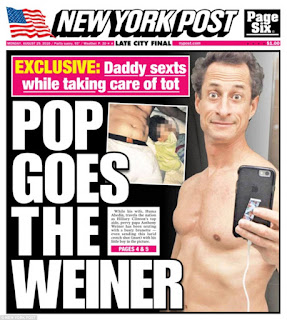 President Weiner sits in the Oval Office and threatens all who would oppose him.  But he uses a different strategy.  If he doesn't get his way, he tweets out pictures of his dick.  Instead of Trump's twitter diplomacy, I call it the "Weiner diplomatic tool."  This ain't the Weiner doctrine.  It's the Weiner "cocktrine."  Or as I like to refer to it... an unsettling, unrelenting cock train of dick pics.  Just when you think he can't outdo himself, he sends out another barrage.  A steady stream of penile propaganda.  Finally, a politician who keeps his campaign promises.  Wouldn't that be a nice bone-us?

It's the equivalent of a Trump twitter temper tantrum.  Now say that 4x fast.

* Kim Jong-Un gets a new haircut?  Weiner shows off his latest "man-scaping."  A pubic paradise that could only rival Weird Al's Amish paradise.

Instead of that Trump sculpted side-do, you get the immaculate schnoz extension.  Instead of Trump's profound insight into all that is nice, great and amazing... you get an endless repeat of a Weiner tirade on state run television.  The gentleman will watch this!!!


And don't forget the first lady, Palestinian refugee Huma Abedin.  They reunited on J-Date over a bowl of kreplach and an apricot hamantaschen (yeah... I know, I know.  I was gonna go with the predictable chocolate babka but settled on a tri-cornered pastry). 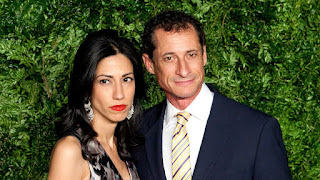 She kinda has this ethnic Melania thing goin' on.  Truth be told, I've always sympathized with her.

But wait, there's more.  We still need a bizarro anti-cabinet.
May I present the Weiner administration.  If we don't get this crew confirmed, I'm gonna go nuclear!

Department of Transportation --- weirdo guy who rides around town on a unicycle.

Department of Education --- Corky from the ill-fated drama sitcom "Life Goes On."

Department of Justice --- the Green Lantern

"In brightest day, in blackest night,
No evil shall escape my sight.
Let those who worship evil's might
Beware my power--Green Lantern's light!" 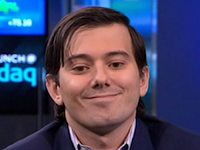 Secretary of State --- A miniaturized Weiner clone!  It's Screech from Saved by the Bell.  Formerly a jailed Jew.  After receiving an official Weiner pardon, he was tasked with serving up that delectable brand of Dustin Diamond diplomacy.  And just for the record, I really like the term "Weiner pardon." 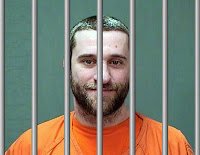 Department of Defense --- Jesus Christ, the son of a Jewish carpenter.  A pacifist at heart.  Surely one to always turn the other cheek.  Hey, he might not get confirmed.  But the son of God will certainly be beaten, bludgeoned and resurrected. #alternativefacts #fakenews

The FBI & CIA were merged together under Trump holdover Steve Bannon.  I feel safer already.

We'll also need a duo to host the annual prayer breakfast.  The Chrisagii would seem to be an ideal fit.  Gotta love the shotgun in the background.  If the country begins to trend authoritarian, we'll just put 'em in charge of the ECO.  They're under the impression it stands for Extra Christian Organization but it actually means Ethnic Cleansing Operation.  Don't sweat it.  No harm no foul.  At least they meant well.  It's about good intentions.  After all, it's a god thing. 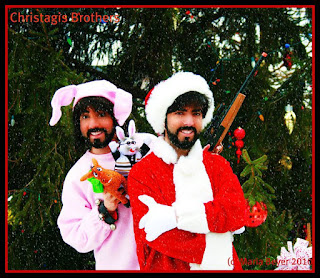 And finally, someone to help promote the defunct Michelle Obama "Let's Move" anti-obesity campaign.  It'd be nice to see a tiny sliver of bipolar, bipartisanship here.   Let's keep a movin' with the Governor of New Jersey... (kettle corn) drum roll please... none other than Trump castaway... our esteemed corpulence... the reverse lipo-sucked... Chris "Krispy Kreme" Christie. 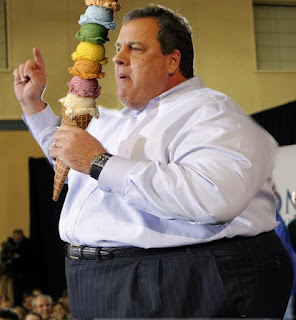 A personal concession.  The multi tiered ice cream cone appears to be a fake edit.  Much like Lee Harvey Oswald's 6.5×52mm Carcano Model 91/38 carbine with telescopic sight.   But the Christie town hall pic?  Uh, lamentably no.

Now all that's left is a catchy campaign slogan for the next 4 years.  Naturally, most people would go with the obvious --- "I wish I were an Anthony Weiner weiner."

But I'm thinking more along the lines of a narcissistic, adaptable AC/DC spin-off.  I've got Big Balls!

Never doubt the "Scrotum POTUS!"  I can assure you.  He'll readily sext your fucking brains out!

Another term I like.  Highly underrated and deserving of a unique font --- Scrotum POTUS.

On an entirely unrelated note, I'm going with the Falcons tomorrow in a Super Bowl shoot-out.

I sense some parallels with the 2010 Super Bowl.  The NFC's Saints (+6) upset victory over the Colts.  Plus, the Falcons are opening their brand new stadium next year.  Wouldn't Goodell love to show off the newest NFL citadel in prime time? 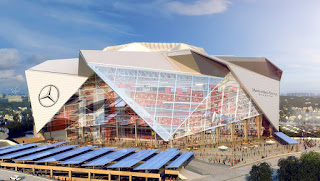 As for MVP, I'm literally on my hands and knees hoping for it to be wide receiver Mohamed Sanu.  I'm literally rolling out the god damn prayer mat!  Only because I want the entire world to repeatedly say the word "Mohammed" (either spelling will suffice).


But alas, I am a realist.  I'll go with Falcons QB Matt Ryan. #riseup
And before he ventures off to Disneyland, someone tell him to use my slogan on nationwide tv.

One last prediction.  This one's a bit of a long-shot.
Somewhere in the range of 50-100 people will die inside NRG Stadium tomorrow night.
It will be the result of a Donald Trump "twitter-ordered" emergency evacuation.

Don't get it?  Allow me to summarize.  Picture this little Trumpy Tramp refugee... but with a bad red comb-over.  Not on some isolated fantasy island... but rather during the most heavily televised, scrutinized event on the planet earth.