Hockey season is back.  Around Pixburgh, it never really ends.

But something notable happened to kick off the new season.  Consol Energy sold the naming rights to the arena.  Now, and for the foreseeable future, it will be known as PPG Paints Arena.  Some fans want to call it the Paint Can or the Paint Bucket.  How predictably quaint or explicitly taint... depending on your perspective of course.

But there's another change in the works.  And the vast majority of fans have no idea it's coming.  Along with the transfer of the venue's name, there has been a "hushed push" to get rid of the Penguins beloved mascot.  It's hard to believe but Iceburgh will soon be on the way out.  Gasp. 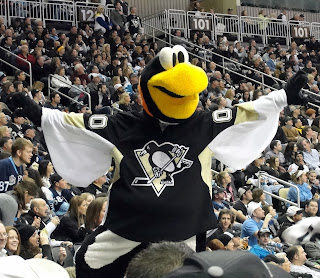 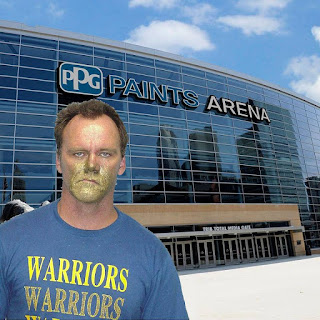 Yep.  In an attempt to broaden the fan base, Penguins management reached out to hockey enthusiasts in Eastern Ohio and the West Virginia panhandle.  Sure enough, they stumbled upon Patrick Tribbett, the regional paint huffer with a national following.

And the timing couldn't be any better.  Here's how it all unfolded.

Just as the Tribune Review planned to cease operations, their sales department realized that some residual money had been allocated for marketing and future promotional endeavors.  A firm commitment was made to preserve the legacy of this storied publication.

Publisher Richard Mellon Scaife --- "The Trib isn't going down.  Not without a fight."

And what a "golden opportunity" it was.  Most fans seem to agree.  There's a definitive "silver lining" to this exciting new partnership. 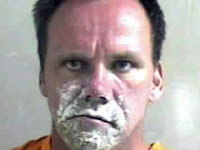 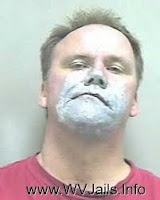 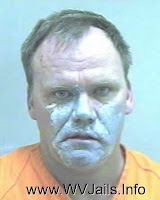 Penguins CEO Dave Morehouse --- "The Trib is back!  He's gonna paint the town red.  And to a lesser extent, gold and silver."

Owner Mario Lemieux --- "For the home opener, we rolled out the red carpet.  This wasn't by accident.  Trust me, there's no bigger celebrity than The Trib."

Coach Mike Sullivan --- "The Trib brings with him an intangible quality.  He's going to make our offense, well... more offensive."


However, it should be noted.  With Iceburgh getting his walking, er uhh, sliding papers, not all fans are receptive to the transition.

Divorced mother of 4 from Wilkinsburg (correctly pronounced "we'll kill yinz burg") --- "The Trib sends the wrong message to our little 'uns.  I was hoping for a 'less dirty' mascot.  One who relies on a cleaner source of intoxicants.  Maybe nitrous oxide or something along those lines.  It's all about promoting a greener environment.  Think of the children!"

Others fear that the iconic Terrible Towel could fall from grace.  You gotta admit --- it does send a conflicting message.  After all, a towel isn't that far removed from a washcloth.  And what do you use a washcloth for?  To wipe that damn paint off yo face!


I've been thinking about Trump's unorthodox presidential campaign.  Exactly what's his true objective here?  Assuming he loses on November 8, will he just accept defeat and call it quits?  Will he gracefully step aside and follow the lead of his predecessors (Mitt Romney, John McCain, John Kerry, Al Gore and so on)?  Will he just terminate his scorched earth campaign and retire?   What about the monetary damage inflicted upon on his economic holdings, not to mention his tarnished brand?  How can he spin everything, bounce back and return to "relevance?"

I just have this weird hunch he'll try to take advantage of his standing and all that heartland political capital.  How do I think it manifests itself?  Well, hold onto your sloping toupee.  It's called "Trump TV."

Let's face it.  For the past year, he's been railing and raging against corruption and the status quo --- the journalists, the state dept., private industry shipping away yer jobs.  Whether or not there's any merit to those claims is totally irrelevant.  The message has been out 24/7.  The mainstream media is on the Clinton payroll --- They lie.  They distort.  They're untrustworthy.  In essence, they've been "paid off."

This message has unlimited appeal to the extreme right wing.  That's who Trump's targeting.  Not necessarily the right per se.  I'm talking about those who want something beyond Fox News being 'fair and balanced.'  The hardcore base.  That segment of the political spectrum was always there, but now it's extremely public.

These are the low-information white male voters (aged 18-35).  Their minds are pliable and can easily fall prey to emotionally charged, political red meat.  Their issues will never subside regardless of who gets elected.  Jobs, trade, illegal immigration, gun rights, drugs, violent crime, corruption and incompetence in Washington, political correctness, the spiraling debt, the makeup of the Supreme Court, the pitfalls of Obamacare/socialized medicine, and of course, an increase in military spending and getting tough on terrorists (domestic and abroad).  These issues will remain in the public realm in perpetuity.  All you have to do is frame them accordingly.

Yep, Trump's laying the groundwork for "Trump TV."  This source for news would magically appear after a "rigged" election... out of necessity.  Because those aboard the Trump Train would be morally obligated to share the truth about how they were schemed by the system.  And what better a way to have a grand opening, kick-off for a new media outlet?  It's called justice and justification.

Let's jump ahead a few weeks.  Does anyone think that Trump is going to praise Hillary for a hard fought campaign.  Regaling our Democratic system while celebrating the wisdom of the electoral college and transitioning to a brave new world.  Uhh, I don't think so.  He's going to bitch, whine and throw a temper tantrum... the likes of which you could never fathom.  This will further lay the groundwork for Trump boob tube.  Continue to steal the headlines.

I imagine he'll team up with an existing conservative news outlet, probably Breitbart and a few disjointed social media outlets (Infowars (conspiracy material) and scattered individuals like Rush Limbaugh (social conservatism) / Newt Gingrich (economic conservatism).  This will be Trump's legacy.  A populist base that is permanently hostile.  One that cannot be reasoned with.  One that sees every issue as black or white with no shades of gray.  One that frames every issue as good or bad with no room for compromise.  One that explicitly objectifies every individual --- crooked, lyin', low energy, cheating, ugly, lazy, fat, stupid, etc.

It's an easily digestible ploy.  Not a lot of room for conjecture or debate.  Just demonize the living shit out of anything and everything.  You'll always have 20-25%, and occasionally up to 40%, of America mindlessly following your lead.  That particular segment of the population ain't gonna magically disappear overnight just because Trump loses.  It's the Kenny Chesney lovin, Budweiser can drinkin, truck balls adorning, skoal spittin', flag wavin', national anthem standing, pancake syrup covering, hunchback Hillary haters.  Trust me, these automatons are omnipresent.  And as matter of fact, they'll be seeking guidance.  What do we do now?  Where do we go from here.  Help us.

Think about it for a second.  Trump has put his brand on just about everything imaginable.  Trump Vodka (he doesn't drink).  Trump university (he doesn't teach).  Trump Casino (he lost money).  Trump golf (decent swing).  Trump beauty pageants (he's misogynistic).  Trump clothing (he outsources).  Trump's apprentice (you're fired).  Everything is a straightforward, predictable attempt to increase his leverage.  It's all about fame and fortune.  No substance.  Why not launch Trump TV (low or no information)?

Hence, the perfect opportunity.  I've already figured out the tagline ---

Posted by sonofsaf at 6:37 AM No comments:


In lieu of the current creepy clown controversy, I thought a few memes were in order.

As if a nationwide clown crisis is necessary to keep this guy from making public appearances... 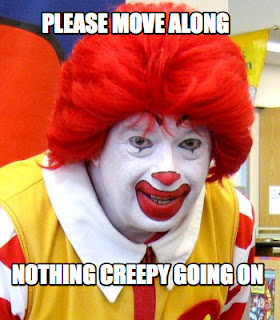 Turn that frown... upside down. 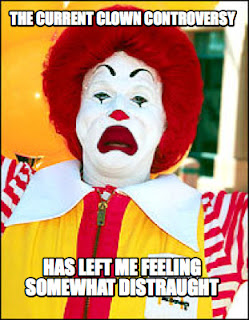 Only Eric the Clown would be capable of such deception.
Bozo would never have resorted to these tactics. 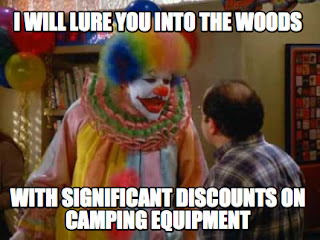 Posted by sonofsaf at 3:13 PM No comments: