Yesterday was epic... specifically for those who live vicariously through the grand achievement of a royal birth.  There might be about 7 billion people on the planet, but this Kate and William baby boy is of the utmost importance.  After she had the baby, the message was delivered by an officially sanctioned courier with a police escort.  I think it was inscribed on some kind of ancient British scrolling paper.

As a practicing atheist Jew, I would have preferred it if the birth announcement were written on parchment, or Klaf as it is called.  The most preferably quality parchment is "Shlil" (the hide of a newborn calf embryo).  They use it for Sefer Torahs (the most prized, holy moly book of them all).  This would have have greatly enhanced my celebratory mood.

If there's one thing our British allies need, it's more royal birth announcements.  Check this guy out. 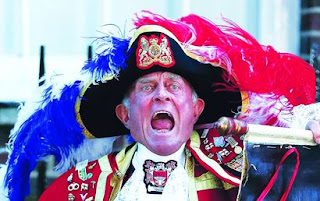 Now that's what I'm talkin' about.  These days, you really don't see much in the way of town criers.  If you think about it, this dude has it made.  He probably works a couple minutes about once every 20 years or so.  Gets all gussied up and yells at the top of his lungs.  Saffy like. 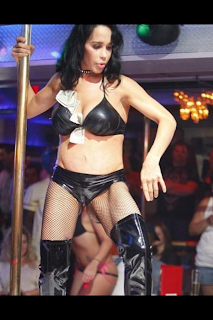 That pic is a little too racy.  Personally, I prefer this softer, more muted version of Octa-baby-momma. 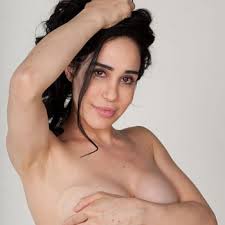 Seriously though, for just having sharted out 8 kids, she looks pretty damn good.

But back in the real world...

They just had this massive display of booming cannons.  One of those 21-gun salutes.  For a second, I thought I was watching The Patriot starring Mel Gibson.

Hey.  Perhaps we could have gotten Ted Nugent to fire off some of his guns (to properly welcome the Octamom horde). 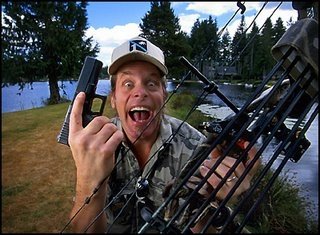 Hmmm.  Maybe when Bristol Palin has her second child...  I hope she has twins this time.  I'd name them Fluke and Puke (but that's just me). 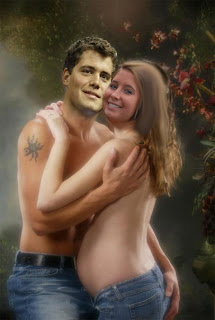 If this was photo-shopped, there is no god.

In fact, maybe Will and Kate will opt for a celebrity-blended baby name.  In this case, it would have to be "Kill" or "Wait."  Although I do know a guy named Killer, and a dog too for that matter... I just don't care for the murderous connotations.  But the second name ain't that bad.  White Lion could play a show outside the maternity word.  Maybe with a wango-tango Nuge opener.

I just thought I'd offer my take on the royal birth.  Odd that the birth of a white baby boy of unfathomable privilege over in Europe is what knocked Trayvon Martin out of the news cycle.  Just something to think about.

This utterly infuriating video is making its rounds through social media.  It speaks for itself.


I always thought that Wheeling, West Virginia (with its 50+ checkpoints per year, elderly population and ridiculously high ratio of citizens to cops) was the DUI checkpoint capitol of the world.  Perhaps we'll be forced to relinquish that title to Murfreesboro, TN.   The second the cop hollers at this man - "HOW OLD ARE YOU?" with that southern good 'ol boy barbeque twang, I knew it was going to be one helluva ride.

But the anger I feel after watching that bullshit runs so much deeper.  I think a lot of it stems from the 2008 Obama/McCain election.  Allow me to explain.

During the heated campaign, Sarah Palin was often heard stoically yammering on and on about how Senator Barack Obama "pals around with terrorists."  Along with the ingenious slogan "Drill Baby Drill", this was pretty much the essence of the VP campaign which overshadowed McCain's bid for the presidency.  But Saf, aren't you all about supporting even the most extreme elements of freedom of speech?  What... with all your never-ending talk of cellular-induced stampedes?  Well perhaps.  But there is a limit.  Here's why this cop is a troubling microcosm of the evisceration of the 4th Amendment (protection against illegal search and seizure).

When Palin would endlessly recite Obama's ties to domestic terrorism, she did our country an irrevocable disservice.  Although Obama won in an electoral landslide, the popular vote and red/blue color of the map looked considerably different. 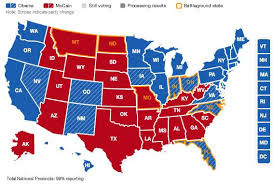 Now think about it.  Especially in these redder, rural, low income, low information, more hostile, confederate states south of the Mason Dixon line - the voting population sided with the Republican candidate.  I have no problem with this.  But when McCain (an older, white war hero) lost to Obama (mixed ethnicity, Harvard intellectual), it left a horrible taste in these peoples' mouths.  They felt angry, bitter and betrayed.  Hence, the evolution of the Tea Party and the Mitch McConnell obstruction-at-all-costs directive.

Now here's the correlation with the asshole cop video.  All these Southern cops who opposed Obama because he was a socialist, or a terrorist, or he wasn't a real U.S. citizen... well all that sentiment didn't magically vanish.  Instead it festered.  And it was really grounded in pure hatred and this seething contempt.  Years later, these people are finally realizing that the dominance of the Caucasian male is over.  In layman's terms, the GOP is in deep shit.  The GOP should be GODP (Grand Old Disintegrating Party).

But wait one cotton pickin' minute, how the fuck could all these people vote for someone who "pals around with terrorists?"  Isn't it logical to assume that if you hang out with terrorists, than you are by definition "a terrorist."  And if you voted for a terrorist, that likely makes YOU a terrorist.  These would seem like reasonable conclusions.

Now chew on this.  If I'm a small town cop and I pull someone over who has an Obama/Biden bumper sticker, than I'm obviously concerned about whether or not that person is a terrorist.  Hell, it's what the Republican propaganda machine and Fox News says... so it must be true.  And hey, I'm a law enforcement officer entrusted to protect Americans from the evil-doers who are trying to destroy our way of life because they "hate our freedom."

Saf, are you implying the driver in that video was an Obama supporter?  Well, I can't make that assertion.  But I do know the mindset of the cop.  And I am sure of one thing - even though I don't know the pig personally, I do know that he is committed to stopping terrorism.  But here's the obvious discrepancy.  There aren't any terrorists in Murfreesboro, let alone the entire state of Tennessee.  But there sure are a lot of people who drink and drive and do drugs.  Well, I reckon I'll make my rocky top home state a safer place if I go after these hedonistic substance abusers (you know, the ones who drink beer and smoke pot).  So there becomes this bizarre merging of terrorism and DUI checkpoints.   We live in a land where that tiny dicked, pork-bellied abrasive loudmouth is gradually programmed to think that everyone he stops could be a potential threat.  They may not be the actual enemy, but they're the next best thing.  I must do my part as an ambassador and enforcer of the law.  These people who enter my checkpoint -  they're what's available, so it's my duty to take them down and protect my fellow citizens all under the guise of patriotism.

That's the underlying theme and it ain't goin' away anytime soon.  Sickening.

The funny part... I voted for Obama in 2008.  In 2012, I just couldn't repeat the same mistake.  Saf, WTF - you voted for Mitt Romney???  Of course not.  Instead I journeyed to Utah and voluntarily sucked every Mormon's cock.

Actually, I voted for the Libertarian candidate (New Mexico governor Gary Johnson).  Maybe if I lived in Ohio or PA, I would have reluctantly voted for Obama.  Then again, I've become so disgusted with both parties.  It's really hard to say.  If I get any mileage out of the stampedes, I'll use it to push for negative voting.  It's my next cause (probably a ways down the road).  Unless I get pulled over on that road and illegally detained.
Posted by sonofsaf at 4:08 PM No comments:


I just got back from the annual 5 mile "Freedom Run" in glorious downtown Wheeling.  Finishing time was 43 minutes and change.  Not good, not bad.  Other than the repetitive stench of sewage, I kind of like this race.  It's flat and fast.

Of course, I opted for the usual "race bandit" approach.  The next time there's one of those "Run from the Cops" benefits, I think I'm going to wear my PIGS SUCK t-shirt.

I haven't made it yet but it's a pretty cool design. On the front would be a picture of the infamous pig (of Pink Floyd fame). 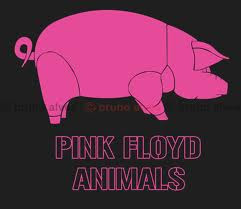 Replace that text with "PIGS SUCK"

On the back of the shirt it reads:

I also like the AJKAWVNP (Atheist Jewish Kosher Alliance of the West Virginia Northern Panhandle).

Cruised up to Pittsburgh.  Gigi and I hit the downtown fireworks.  Met up with our friends and their daughter on the Roberto Clemente Bridge.  They regaled with some furry stories.  That's right - it's Anthrocon 2013 at the Convention Center and they were staying at the hotel next door. 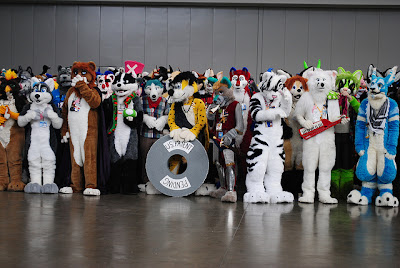 I suppose this is a good time... or at least the manifestation thereof.  One would think the furries would host their all-star convention when it's a little colder outside.  Maybe October?  Early July in the Burgh is a bit hot and muggy.   Doesn't bode well for the rumored sexual proclivities of the animal-garbed weirdos.  And what about all the fireworks?  Assuming they're immersed in role-playing, wouldn't they all want to go hide in a utility closet or under a bed (nervously shaking and shivering).

Two years ago, Gigi was covering the furries and a "turtle" purposely stomped on her foot during the closing ceremonies (a parade where they march around a conference room).  She was pissed about it.  But I think that upright turtle was probably trying to teach her a lesson - you humans don't belong here.  You're not part of our world!  This is our time to shine.  Leave us alone.  Get the fuck outta here!

If I were a furry, what animal would I choose to emulate?  A wolf, a dog, a fox???  I wouldn't even know how to answer an inquiry of such extravagant douchebaggery and unparalleled dumbshittedness.

The best part of Anthrocon 2013... it coincided with the final game of the Phillies/Pirates series.  Hordes of Philly fans always show up at PNC Park.  So at least the furries got a taste of some hardcore verbal bashing.   I can hear the Philly fans now as they walk towards the ballpark.  It's an old-school East coast scolding.  "God damn piece-of-shit make-believe mutt.  Get a life you fucking retard rhino.  If I hear that owl "hoot" one more time, I'm gonna give him a smack."  And the best part - the human-morphed animals won't talk back... so that makes the Philly fans even more irate.

Oddly enough, I had another encounter this morning with Pittsburgh Pirates owner Bob Nutting and talked about the you-know-what.  He was very cordial... just like last time.  But honestly, I think he'd prefer it if we lived in different cities.  He'll smile diplomatically, but in his heart, I know he's thinking "for the love of god, not him again."  And this was only our second encounter.  So until the next time...

Am I the only one who would enjoy witnessing a late season, post all-star break Pirates collapse?  Nope, there's Danno.  Honestly, I have mixed emotions.  It would be cool to see a Bucs playoff game.  But it does go against everything I've been preaching for the last decade or so.  There's just too much energy and talent this year.  I think they make the post season and then likely falter under the high expectations.