I'm having some difficulty coming to grips with the presidential election result.  At some point, I'll write about it.  But not today.  Instead, let us rehash a couple of memes.  I didn't come up with either of these, but I think they're both exceptionally strong. 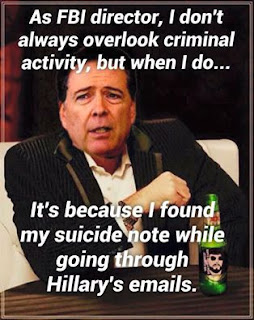 Whoever thought up the Comey one is a total bad ass.  I love the Kenny Rogers head substitution.  I might try one based on the Gene Wilder - Willy Wonka "helplessly idealistic" concept. 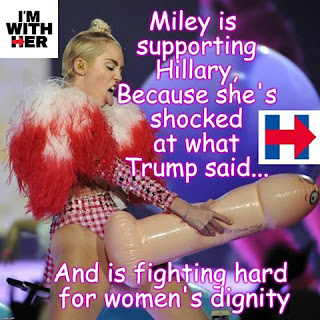 On an entirely different note, what totally makes this one is Miley's patented tongue drop.  Gene Simmons seems stale and haggard by comparison.

One quick thought about the election.  It's called CONFIRMATION BIAS.

Trump's campaign manager, the indomitable KellyAnne Conway, said it best.  Not sure about the quote verbatim but it went something like this.  (Regarding the Hillary Clinton organization)  When everyone around you tells you the same exact thing... there's a tendency to believe it.

Posted by sonofsaf at 9:54 AM No comments:


Obviously the new "bombshell" Clinton email scandal is underway.  It's most likely a matter of FBI/federal bureaucracy engaged in high level ass-covering in case of hypothetical future fall-out.  Well I get it. Whatever.  Comey's do what he's gotta do.

But what's the scandal?  Someone still needs to fill in the blanks.

So here's how I think the Trump campaign gurus are gonna take advantage of it.  I'll even give you the 'when.'  After all, timing is everything.

On November 6, during the Raiders/Broncos Sunday night football game, leak the following narrative to the press.

We have evidence of an email sent from Huma Abidin to Hillary Clinton.

Huma writes...  I'm concerned that what happened, you know... the thing we discussed, could be detrimental to the campaign.  Please know that I'd be willing to tender my resignation if it's deemed necessary.  Either way, I'm on board for the long haul.

Well, maybe not those words exactly, but you get the drift.

Alright, now do you recall "the thing we discussed" part?  Hmmm, what the hell was that about?
Well here you go.  It's time for KellyAnne Conway to fill in the blanks. 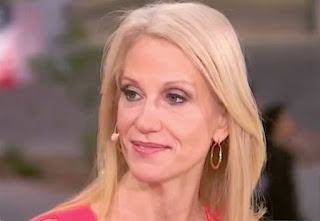 She's pretty sharp.  Not to mention, probably the author as well.  So here's what I think she'll say.

"We have evidence (possibly from a hack) that Huma Abedin was concerned about the possibility of her husband Anthony Weiner (always stress the weiner) sexting dick pix to underage girls and how it might impact Hillary's presidential bid. 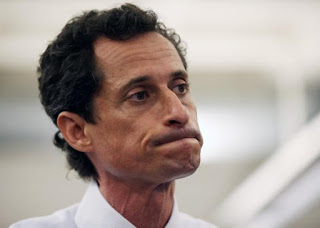 Okay, clean up the "sexting dick pix."   "Wireless transmission of groin smut" is a bit more tasteful.  I don't know about you, but I kinda like the idea of Conway raising her voice in a single, ultimate last act of defiance... about the groin smut, of course.  Screw Obamacare.  Screw Benghazi.  Screw the Wall.  Screw NAFTA and jobs.  Focus everything on Weiner's dick.  This is Trump's best bet.  He's not going to win on chivalry or policy.  And the orange anus ain't gonna magically win over undecideds and minorities.

His objective should be to exclusively destroy Hillary.  That is all.

By the way, if you didn't figure it out, the email is a political KILLER.  Because it potentially implies that Hillary was cognizant of Weiner's pedophile behavior and chose to purposely remain silent.  She chose her presidential ambition and institutional power over the welfare of a child.

And what's been Hillary's primary talking point for the last few decades?  Well, it's that she cares about the children and their future and their children's future.  Education.  Healthcare.  Anti-bullying.  And oh yeah, like ALL politicians and normal human beings... anti-pedophile.

Think about it.  Here's a couple high profile examples.

Do I really need to cite additional examples of how child sexual abuse destroys anything and anyone in its path?  The toll it exacts is irrevocably intransigent.

Plus, by leaking "it" on a Sunday night, you steal the entire Monday news cycle.  Whatever the FBI says (they won't have sufficient time to confirm or deny)... whatever the Clinton rapid response (shock, outrage and feigned disgust)... it just doesn't matter.   None of it would be meaningfully consequential.  Because there's not enough time.   Time is the ultimate weapon here.

All you gotta do is put it out there.  I think enough votes might shift at crunch time.  At least enough to make it interesting.

So welcome to the swearing in!  Welcome to the inauguration.
Thou shalt submit to Donald Trump (You wouldn't understand.  It's a commandment thing).
Hey, don't sweat it.  It's only gonna be the next 4 years... or conceivably 8. 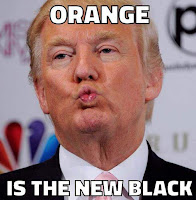 E-gad.  America gets what it deserves... I guess.