One of Trump's token candidates in Georgia's 10th District just got absolutely clobbered in a Republican primary runoff. 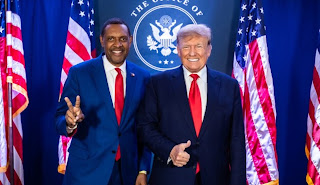 What's really amusing is that Jones was initially running for Governor.  But Trump persuaded him to bow out and run for a House seat instead.  Then, the Orange Prolapse selected former Senator David Perdue to run against his arch nemesis Republican Governor Brian Kemp.  Not only did the two Trump stooges lose again (Loeffler and Perdue in the last cycle), they both lost bigly.

Picture a perfect call one that’s all about me
Orange Prolapse for all to see
Truth is nothing but a lie
‘Cause nothing’s ever free
Treasonous activity
The hateful face of a human disgrace
A jag-off jerk a fucking basket case
What a dope, what a face
Is The Donald’s face
Stormy D. in Lake Tahoe had a taste

Trump sins cannot be absolved
By tweets or phone calls
Defend him ’til the end
Deep in the toilet stalls
Don’t ask why, his voters believe lies
Or why Stormy Daniels blows
Big tit surprise
For all the wide cocks and curtains of meat
What it’s worth, election defeat
KK kook, he got beat
For all to see
All to see

Golden toilets have no worth
Shitting turds from mouth on July 4th
God bless Lee Greenwood and his herpes sores
Shitting all the time behind closed doors
But his Stormy passion face to face
Step by step, was a disgrace
And the vaginal, her cunt’s the stage
Shitting diarrhea’s all the rage
And the retard Trump has down’s syndrome
Shitting often on a golden throne
But Donald’s a clown, a garden gnome

Picture a bright blue ball just spinning, spinning free
Dizzy with eternity
Paint it with a skin of sky
Brush in some clouds and sea
Call it home for you and me
A peaceful place or so it looks from space
A closer look reveals the human race
Full of hope, full of grace
Is the human face
But afraid we may lay our home to waste

Now watch as the ball revolves
And the nighttime falls
Again the hunt begins
Again the bloodwind calls
By and by, the morning sun will rise
But the darkness never goes
From some men's eyes
It strolls the sidewalks and it rolls the streets
Staking turf, dividing up meat
Nightmare spook, piece of heat
It's you and me
You and me

Commissars and pin-stripe bosses
Roll the dice
Any way they fall
Guess who gets to pay the price?
Money green or proletarian gray
Selling guns 'stead of food today

Shipping powders back and forth
Singing "Black goes south and white comes north"
In a whole world full of petty wars
Singing I got mine and you got yours
And the current fashion sets the pace
Lose your step, fall out of grace
And the radical, he rant and rage
Singing someone's got to turn the page
And the rich man in his summer home
Singing just leave well enough alone
But his pants are down, his cover's blown 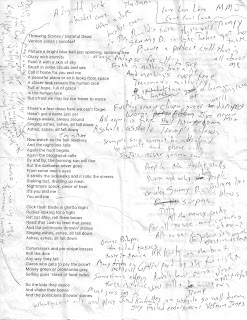 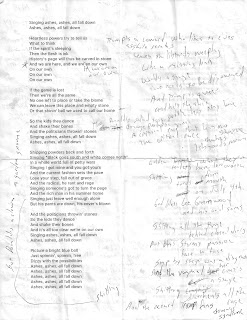 I'm not going to lie, this parody took a while.  Rather extensive lyrics.  But in the end I think it came out pretty decent.

Throwing Stones is probably my favorite Bob Weir tune.  There's just something "intangibly magically epic" about this song.  The version above is from my first GD bootleg.  A 1987 audience tape from the New Year's show in Oakland, CA.  Maxell XL II 90.  Baby!

#800.  The Friendliness Of The Central Perk Gunther (The Loneliness Of The Long Distance Runner --- Iron Maiden)

#915.  She Is A Cunt Beth Van Duyne (I Heard It Through The Grapevine)

#995.  Ducey Fucking Broke Her Hymen (Lucy In The Sky With Diamonds --- The Beatles)