Trump held a rally this weekend in Cullman, Alabama.  The epicenter of the South.  A virtual melting pot of non-vaxxers and redneck crackers.  And oh yeah, that one black dude who always shows up. 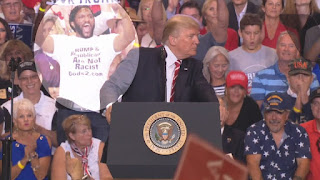 Trump took the opportunity to blame Biden for every problem associated with the military withdrawal from Afghanistan.

This Afghanistan Disaster wouldn't have happened with Trump.  The Taliban knew I would rain down fire and fury if any American personnel or interests were harmed, the likes of which have never been seen.  This is a catastrophe of historic proportions.

Well, I'm gonna spin it in the opposite direction and blame everything on the Orange Prolapse.  Particularly, the latest Kabul airport stampede which killed 7 and injured God knows how many.  When I say "God"... well, in this particular case, I'm referring to Allah.  As a matter of fact, let's blame Allah and Trump.

Kandahar!
Kandahar, has no Jews
And Taliban skills are sold, blood!
Army of boys, having fun,
Equipped with many a gun.

Orange Prolapse is a buffoon
A la carte bloodshed I swear it
You will do what you are told, blood.  Yo, we’ll spill it.
With the might of an orange buffoon.
Don’t know what you got ’til it’s gone,
A  blue Viagra pill turns him on.

You will do what you are told, blood.  Yo, we’ll spill it.
With the might of an orange buffoon.
Big lie, for blood, for blood, big lie.
Kandahar!

Cunegonde!
Cunegonde, is it true?
Is it you so still and cold, love?
Could our young joys, just begun,
Not outlast the dying sun?

When such brightness dies so soon
Can the heart find strength to bear it?
Shall I ever be consoled, love? No, I swear it
By the light of this lover's moon.
Though I must see tomorrow's dawn,
My heart is gone where you are gone.

Shall I ever be consoled, love? No, I swear it
By the light of this lover's moon.
Good-bye, my love, my love, good-bye.
Cunegonde! 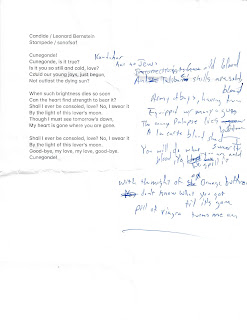 When I was a little kid aged 7 or 8, I distinctly remember my father's TDK SA90 cassette tape labeled "Candide."  Probably because the spelling and pronunciation was unusual.  And it closely resembled the word "candied."

As for human stampedes, you know, when people get trampled to death and crush asphyxiated... uh, no comment.  On second thought, regardless of the location(s), the blame for all future human stampedes should be attributed to Donald Trump.