I've already done a slew of parodies about the Orange Prolapse.  Many of them reference the big lie.  But not directly in the title.  So now, I've entered into this new "subset" phase.  I'll be forgoing the standard preamble and simply provide an updated list of "Big Lie" tunes.  Along with an embarrassing photo or humiliating Trump video clip.

I’m So Lonesome I Could Cry
Hank Williams

Hear that lonesome whippoorwill
He sounds too blue to fly
The midnight train is whinin' low
I'm so lonesome, I could cry

Did you ever see a robin weep
When leaves begin to die?
Like me, he's lost the will to live
I'm so lonesome, I could cry

The silence of a fallin' star
Lights up a purple sky
And as I wonder where you are
I'm so lonesome, I could cry 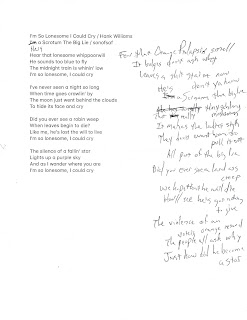 Never saw Hank Williams Sr. in concert.  He died 17 years before I was born.  A little before my time.  However, I did see Hank Williams Jr. a few times.  Jamboree, Star Lake, Monday Night Football.  The most violent, belligerent tailgating scene I ever saw was a Hank Williams Jr. / Lynyrd Skynyrd concert at Star Lake back in the mid 90's.  The scene mirrored the 1-6 insurrection at the U.S. Capitol.  Replete with the same redneck assholes waving Confederate flags.  Sponsored by Marlboro, Skoal and Jack Daniels.  It's as if the fan base was trying to stage a coup on the little town of Burgettstown.  And the holy ground of Star Lake was its staging area.