#640. Be Unforgiving And Never Stop Lying

Excerpts from a 2018 article in The Atlantic.   It's a template for how to speak like the Orange Prolapse.  Suffice it to say, Trump likes to keep it simple.  I'd claim he has the vocabulary of 5th grader but that's simply inaccurate.  Most fifth graders have a far better grasp of the English language.  Well at least the ones I know.  Also, they can spell. 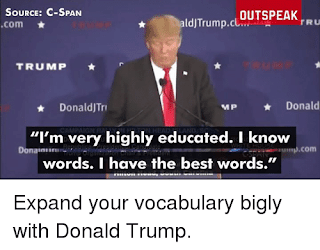 *as a synonym for cheap or widely distributed commodities, such as illegal drugs and leaked intelligence

I usually make an effort to write with a minimal degree of technical "vocabularic" proficiency.

Long story short, I might take a stab at parodying some universally well known movie quotes. 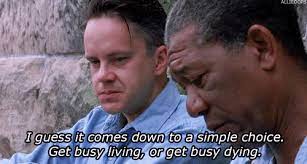 Shawshank Redemption?  Easily one of my Top 10 favorite movies.  Something about the mid 90's.  Braveheart, Good Fellas, Casino, etc.