I'm not typically inclined to help the likes of Donald Trump.  Nothing can supersede my disgust for the Orange Prolapse.  However, I do think this PR narrative has merit.  And it would be easily consumed by Trump nation at-large.

The black Capitol police officer who shot and killed Ashli Babbitt is going to "explain his actions" on Lester Holt tonight in a taped interview.  His identity has already been bandied about the far right echo chamber.  And he's already been on the receiving end of countless death threats.  So I guess it's now or never.  Even though he's been officially exonerated, it's still gonna be a long term public relations battle.  Better to voluntarily come out and go on the offensive.  Try and get ahead of the curve and frame the everything on your own terms.  As opposed to sitting back cautiously and playing defense. 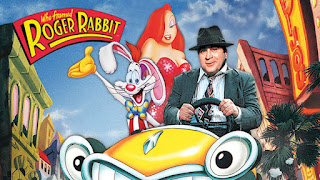 Just substitute those two individuals.  Chuck Schumer as the driver.  And the female behind him as a "lady of the night" version of Nancy Pelosi.  Transform the white rabbit into the black Capitol Police Officer with a gun in his raised right hand.  Make sure to utilize the exact same font.

It's a great idea because you can really exaggerate the physical comic book features of the original animated characters.  Also, it suggestively shifts the blame for 1-6 to Pelosi and Schumer.  Which is, of course, patently absurd.  The notion that those two are even remotely culpable.  But in the post Trump presidency era, it's all buffoonery, internet optics and imbecilic nonsense.  I didn't do it.  You did it.  It's all your fault.

Never seen the movie or any of the sequels.  No desire whatsoever.

Please do not share this material with any relatives of the late Ashli Babbitt.