Former Overstock.com CEO Patrick Byrne is the "founding father" of "The America Project."  He's also the primary financial contributor to the Arizona Cyber Ninja audit.  To the tune of 3.2 million dollars.

Due to his direct involvement, I'm going to include him in the Big Lie parody series. 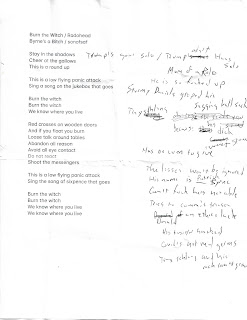 One of the few songs where I overwhelmingly prefer the studio version (mostly due to the tight violins).

Released in 2016, Burn The Witch is probably the best song and video of the last decade.  If you can think of a better tune circa 2010-2020, lemme know.  Just sayin'.  Earlier in the year, I wrote a similarly styled Burn The Mitch parody regarding the Senatorial minority turtle.

Please do not share this information with former President Donald J. Trump.