Ah, Don McClean's classic "American Pie."  Not a lot of people know this... but his song is "deep" in the Brad Paisley repertoire. 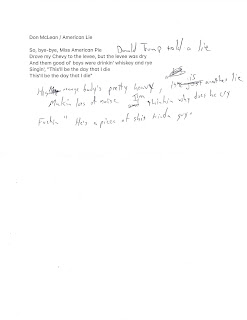 Naturally, I just did the refrain for this one.  Admittedly a bit of a cop-out.  But hey, this song is hella long.  Naturally that's the rationale for offering an unprecedented, additional, alternative version.  Huzzah!

But me and him go way back.  To the days of Linsly and West Lib.  How many Capitol Music Hall rehearsals?  How many band blasts?  How many times have I asked his father Doug to encourage his son to relay generic, undiscussable venue safety information to the masses?  (Hint: Everyone has a cell phone).

My point - I usually list the number of times I've seen a band or musician perform live.  But to be blunt... if Brad don't give a shit about me.  Well then I don't give a fuck about him.  More importantly, it would only be an estimate and I like to be precise.