Rest assured, as long as Trump continues to dismiss the big lie (which he will do until he dies), I will continue to write material which exposes the big lie.  Well at least until I git to #100.

Regardless, I was checking out the latest 2024 presidential election odds.  Pretty much what you'd expect.  Although I must say, Mike Pompeo seems like a pretty enticing wager at +5000.  He has that George Bush Sr. styled resume.  But way more ambitious and power hungry.  At 57 years old and with a taste for DC, I doubt he'd be content to simply head back to the bible belt and run for statewide office.  You know, be seen traipsing through rural Kansas, but at the same time, skillfully avoiding the Westboro Baptist Church in Topkea.  Sigh.

Kinda surprised they didn't include Governor Kristi Noem (R-SD).  I'm virtually certain she'll run.  But she's more likely gonna pull a Kamala.  You know... join the debate stage, get some shots in, and then purposely fade while discreetly seeking out the VP spot on the Republican ticket.

Seriously though, when it comes to Mike Pompeo, I like him as a viable dark horse.  Not only has he successfully distanced himself the Orange Prolapse, but the majority of Republican voters will probably be looking for a more establishment candidate after the Trump coup investigations finally conclude.  Which I suspect will be conveniently sandwiched between the 2022 primary > 2022 general.  Though mostly during the latter stretch so as not to disrupt any support for far-right Republican extremist candidates.  If I'm Pelosi, I want to see the Republicunts nominate as many sycophantic Trumpy douchebags is as humanly possible.  Push the party to the fringe.  Then, take those orange clown subsidiaries down, along with all that investigatory momentum, straight into the general.

So welcome to #40.  Maybe for Number 41 I'll try a Dave Matthews song (#41 is one of my favorite DMB tunes).  Although I gotta equivocate.  His song's aren't lyrically well-suited for parodies.  But I might give it a shot.  Depends on my mood.

Trump lost the race
Democracy too
A big disgrace
America too

It’s the big lie, don’t ask why
It’s not fair, don’t you care
There's nothing you can do but eat shit
Should keep you on your toes
The fire and fury he has wrought
He is reaching new lows

You’re under his spell
On Donald’s team
His life’s regrettable
He's made the border mean
Not elected it’s the big lie
Democrats pray for him to die
Rejected.  Dejected.  It’s the big lie

Electric eye, in the sky
Feel my stare, always there
There's nothing you can do about it
Develop and expose
I feed upon your every thought
And so my power grows 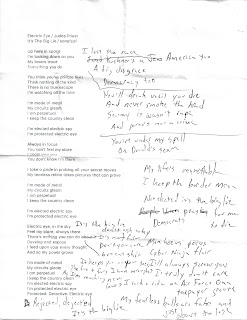 Through the eyes of a teenager who got hooked on metal in the mid 80's, this was one of the most mesmerizing videos I'd ever witnessed.  At the time, the raw authenticity blew my mind.  Still does.

Since 1980, Judas Priest has come to the Burgh a total of 14 times.  They're coming to Youngstown next month on September 17.  I intend to attend.