There's two fundamental ways to acquire political power.   You can build unity and consensus and try to bring people together.  It's called the love strategy.  Or you can drive wedges, target minorities, and rip people apart.  It's called the hate strategy.  History has repeatedly demonstrated that both approaches are equally effective.

From a political perspective, Trump has tremendous appeal amongst the antisemitic crowd.

But I've always found it curious how their love for the Orange Prolapse is sooo strong... 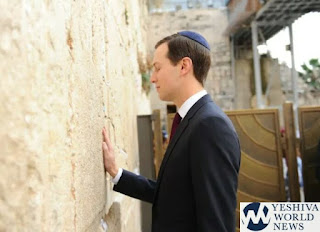 that they seemingly give a pass to Jared "Jew-Boy" Kushner and his wife Ivanka "Cunt-Dump" Kushner.

Anyhoo, let's give a big "Shalom Shout-Out" to the fake Jews.  Not to be confused with the fake news...

As a habitual whiner, psychopathic crybaby, and lover of walls, it seems appropriate that Trump would find comfort and solace in the "Wailing Wall."

Kushner Is A Jew
sonofsaf

Breaking Us In Two
Joe Jackson What a songwriter.  Since 1979, Joe Jackson has been to the Burgh a grand total of 6 times.  Never seen him.  I must say though... I think my parody does the song justice.

I'd put this song somewhere in my all-time Top 10.  Very emotional and heartfelt.  And the melody never gets stale.  That song, released in 1982, is 40 years old.  How time flies. Steppin' Out & Is She Really going Out With Him?  Can't go wrong with those classics either.

Please do not share this material with Jared Kushner and/or former President Donald J. Trump.