My daily exercise routine takes me down by the ballpark and stadium... much to the regret and collective chagrin of the erratic Pirates and beloved Steelers.

But yesterday was different.  Picklesburgh!  All things pickle-oriented saturated the Roberto Clemente bridge.  Last year, the inaugural event took place on the Andy Warhol bridge.  But it has been indefinitely shut down for construction.  So they moved it next to PNC Park.  Way better venue if you ask me.

The crowd was pretty thick, both individually and from a throng-like (and dong-like) perspective.  You could buy a t-shirt that says "I'M THE REAL DILL!"  Or you could purchase the weaker offering, "WORKIN' FOR A GHERKIN."  I would have preferred JERKIN FOR A GHERKIN, but that's neither here nor there.

Off the South end of the bridge was the "Lil gherkin play zone."  Fun-filled activities, farts and crafts for toddlers and the kiddos.  The naming rights assigned to this area really bother me.  I just have this problem with everyone walking around, shuffling about, talking exclusively about pickles.  Everywhere you go, everyone is repeating the exact same word... pickle.

Did you try the pickled tapioca pudding?  Who won the pickle juice chugging contest?  Did you get your free pickle broach?  We sure did.  Gigi snagged a handful. 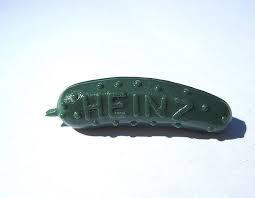 How about a pickle temporary tattoo?  Carpe diem!  What about the famous pickle on a stick?  Whoever thought this one up was a vegan genius.  Hold the phone!  It's a pickle stabbed with a wooden shish kebab skewer.  Shut the door!

Did you get a picture taken with Mr. Pickle?  A Heinz-spired version of Steely McBeam with a park ranger theme.  Kinda had this dapper, celebratory child molesting vibe. 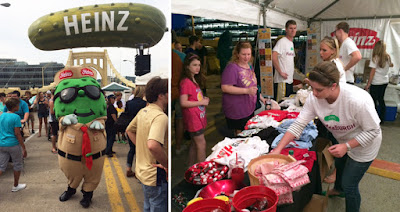 I just get perpetually annoyed when you hear non-stop, conversational references with the exact same word.  I encounter this exact same dilemma at chili cook-offs.  That's some good chili!  Mmm, that chili was really hot!  You wanna know who has really good chili?  Wendy's.  Whaddya do?  What the fuck does one do?  What can you do?

A small crowd had gathered.  An older lady was sitting on the sidewalk.  She had one of those miniature, dolled up celebrity dogs.  They were sharing a large dill, swapping licks and kisses.

This one enterprising young woman had a stand comprised of glass-blown items.  Numerous bowls and small glass pickles.  I casually thought to myself, she should consider rebranding her merchandise as "pickled marital aids," or if you prefer... DILLDOS.  This would be a huge hit.  Talk about a Picklesburgh keepsake!

Plenty of security for the annual Pickle Fest.  City cops, state troopers and privately hired bozos.  I guess they weren't taking any chances.  I once wrote an article about bridge stampedes.  In 2005, 953 people were crush asphyxiated on the Al-Aaimmah bridge in Baghdad.  Easily the worst bridge stampede in the history of mankind.  Never really made the news here in the states as it coincided with Hurricane Katrina. 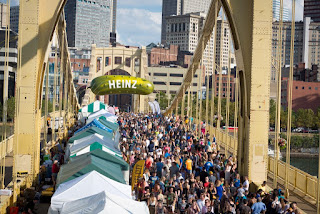 Although I seriously doubt Picklesburgh would be a terrorist target, uh well... you never really know.  Let's just agree it would bring new meaning to the term "bleeding green."

It's called a pickle pin. I have a gold one

Tuffy --- Glad to hear you chime in. Did you know that the owner of the Pittsburgh Riverhounds is "Tuffy" Shallenberger? Apparently he lives in Canonsburg. Well, this area ain't big enough for 2 Tuffies. I'll get to the bottom of mess and report back. SAF