I watched the intro to Monday Night Football last night (Cowboys at Cardinals).  Mostly because Jerry Jones vowed to fire any player who didn't stand for the national anthem.

Turns out, the entire team, alongside their pompously influential, botoxed owner, went to midfield, locked arms and "took a simultaneous knee" BEFORE the national anthem started.  Boos reigned in from the stands.  But I don't think that's too big of a deal as the home crowd always jeers the opposition.

Sure enough the POSUS (my knew acronym for #45 --- Piece of Shit of the United States) immediately tweeted...

The booing at the NFL football game last night, when the entire Dallas team dropped to its knees, was the loudest I have ever heard. Great anger

But while Dallas dropped to its knees as a team, they all stood up for our National Anthem.  Big progress being made-we all love our country!


A 27 year old woman named Jordin Sparks performed the national anthem.  At age 17, the Phoenix native was the youngest American Idol winner in the series' history.  But most important, she is of mixed racial descent (much like our previous president).

She didn't take a knee.  But she did make a discreet political statement of her own.  She had a small ink note written on her hand "Prov 31:8-9" 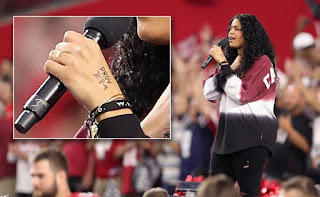 8:  Speak up for those who cannot speak for themselves, for the rights of all who are destitute.

9:  Speak up and judge fairly, defend the rights of the poor and needy.


I applaud her version of political activism.  But here's what I would have done.

Just as the mammoth flag unfurled across the entire field, and the crowd went dead silent...

I would have simply said.  "Sorry guys.  No national anthem tonight."

Naturally, thundering disapproval would reign in from the throng.

Then, I'd say, in the sweetest, simplest voice, "I'll proudly sing our national anthem... but only after Donald Trump issues a formal apology to President Barack Obama for claiming he wasn't a citizen of our great country."

Then, I'd do the patented Obama mic drop. 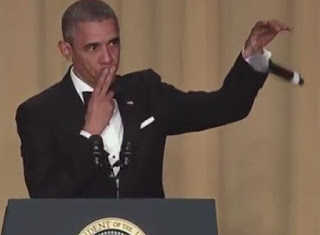 Can you even begin to fathom the MNF production horror?  I imagine the crowd would go absolutely bonkers.  Some would boo, but then I'd have to assume the majority would deliriously applaud.  I guarantee it would evolve into a monster ovation.  When people realized that a young, black/white woman is demanding a smidgeon of dignity from the highest office in the land.

An even better scenario --- after following my script, remain silent, but get the entire crowd to sing the national anthem.  Now that would be an unforgettable game-changer!

And I'd also have a carefully prepared statement simultaneously released on my facecrack, twitshit, instafuck, whatever.

Trump would be completely forced into a defensive posture.  The mere thought of him attacking an attractive 27 year old female pop star icon, especially one of mixed heritage, would not bode well.  He'd be coerced by someone of vastly less significance (the true essence of that which encompasses super-empowerment).  The incident would become a topic of endless conversation.  One of those moments in time.  And I'm virtually certain, the optics would finally necessitate an official apology for the incessant years of birtherism.  Something that nobody has been able to get from orange fat-fuck piece of shit.

The symbolism would have been spot-on.  Because Obama pulled off the OMG OMD (original mic drop) moment at a celebratory roast.  An event which is all about self-deprecation.  A quality which Trump isn't lacking.  It's a quality he doesn't even know exists.

My over-riding point.  Jordin Sparks would lead the way.  She'd establish a backdrop where musicians could suddenly refuse to sing the national anthem UNTIL the POSUS demonstrates a modicum of respect for Obama and his legacy.  This is way more dicier territory as opposed to taking a knee or raising a fist.  It's a pure chaos maneuver.  A real, unprecedented systemic disruption.

And yeah, Sparks would take a little heat from Fox News and the patriot police.  But at the same time, she'd easily pick up the slack with the general population.

It's called super-empowerment.  Something I attempt on a daily basis.

I would LOVE for someone to do this!

TRUMP IS A PIG!