Much to the chagrin of humanity, I had never been to a Pens game at Consol Energy Center.   Then, all of a sudden, me and Gig came down with a case of Mt. Lebanon Spotted Fever.  We hit the Chicago Blackhawks game a couple Sundays ago and then hit the final regular season game against Ottawa last night.

She scored a freebie loge ticket ($237) off some young kid with a stack.  I snagged mine off some dude with a sprig of seasoned meathead overtones.  Very nice guy... but you know, he had that barbed wire bicep tattoo, crew-cutted disposition.  He originally wanted $30 but when I told him I wouldn't use the seat, his eyes lit up.  All of a sudden, he seemed almost jubilant.  He almost begged me to take it.  Jackpot.

As expected, there were plenty of extras.  Not surprising for a game without relevance.

And how about this!  It was scratch off ticket night.  She won a free "autographed" (more like imprinted) hockey puck.  She opened the box and said, "What's this?  Who's Juicy Joke N'at?"  To which I replied, "Oh yeah, Yussi Juice is cool." 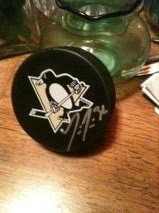 I think he's related to a Swiss version of Juice Newton."  To which I was regaled with a stellar off-key version of "Playin with the Queen of Hearts."  I survived this back and forth by reflecting on the recent change in the weather.  Truth be told, I deserved it.

We physically journeyed to just about every seat in Consol.  First, we went to the absolute top.  Interesting perspective.  Feels like you're watching form the heavens.  This is where God must sit unless you subscribe to the customary "he is everywhere" narrative.  Sounds reasonable until you explain to hardcore Christians that technically speaking, Jesus is in the toilet.  Then, they get a little defensive.  Personally, I think the Easter Bunny is well-suited to view the game from the penalty box.  Just seems like a good fit.  Perhaps a cat or dog could observe the game from prep area of Nakama.

Which brings me to the other scratch-off ticket.  A free order of Nakama fried rice... redeemable only at the Southside location.  In a word, this is truly brilliant.  This 30 cent side dish probably brings in yinzers by the busload.  Then, after drinks and apps, they're probably staring down a bare minimum of $60 per yinzer.  Now that's a marketing promotion at its finest.  It's up there with the 10% off Penguin limited edition merchandise.  $24.99 t-shirt that says "Buckle Up Baby." Save $2.50.  Now that's what I'm talkin' about! (individual named Bear on a 2010 Maury Povich paternity test when it was revealed that he was NOT the father of baby Skylar).

Tangent:  I've been trying to come up with a super-negative acronym for UPMC.  I wish to engage in the Pittsburgh hospital wars.  If you have a good one, drop me a line.  Something a little more sophisticated than "U Piss in My Cunt."  And why not attack Highmark as well?  Wouldn't it be cool if some other entity entered the fray?  Who proclaimed that only the health care giants have a monopoly on casting aspersions at each other?  If they wish to besmirch my reputation, so be it.  I can accept that.

For the second period, we met up with a couple of her friends.  We watched from the front row of the 200 section overhang.  A puck was lobbed intentionally into the crowd resulting in a delay of game penalty.  A woman in the the fifth row took a puck-to-the-nose.  Not sure how this played out on tv, but I think it broke her nose.  Blood everywhere.  Medics came over and escorted her up the steps.

For the third, we ventured down to some aisle seats in the fourth row along the blue line.  This maneuver was actually semi-legit as we were working in conjunction with a mysterious usher who shall remain nameless.

The accommodations were immeasurably comfy.  I felt like I was sitting in the bucket seats of a limited edition Buick Regal.  The game eventually went to a shoot-out.  Even though Bylsma sat our star players for the third, the game was actually pretty chippy.  Lots of scrum action and some heavy checking.

Most important, I received some mental closure on why the fuck everyone in the arena was standing in line to buy lottery tickets.  Everywhere I looked it resembled this incessant bingo atmosphere.  During the third period, they announced a $30,000+ winner.  At least now everything made a little bit of sense.  I had no idea there was some overriding charity event last night.

On the way out, I snagged this sign.  I might hang it in the dome hockey room. 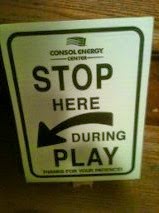 And this morning, while writing this blog,  I found out that our mutual acquaintance G Minimum was at the game.  Seated directly across the ice from us no less. 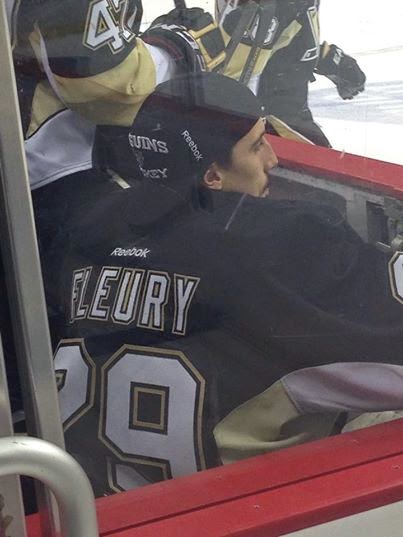 He posted this exquisite picture on facebook --- how "he watched the game seated next to Fleury."  Funny coincidence - this is actually how I like to watch a game with G MIN.  With a sturdy glass partition separating the two of us.  Makes for a far more pleasurable experience.  The ultimate dream would be a small circular carved hole so he could hand me free drinks and various appetizers.

I'll sum it all up with the obvious.  Just glad we're playing the Blue Jackets in the first round.  The best thing about us playing Columbus at Nationwide Arena... every time the Pens score a goal, the crowd goes bonkers.  I think we travel better in Columbus than any NHL city in the country.  I suspect this trend will continue.  Regardless, let's just be content that we're not playing the asshole team from the Eastern side of the state.  Their time will come. 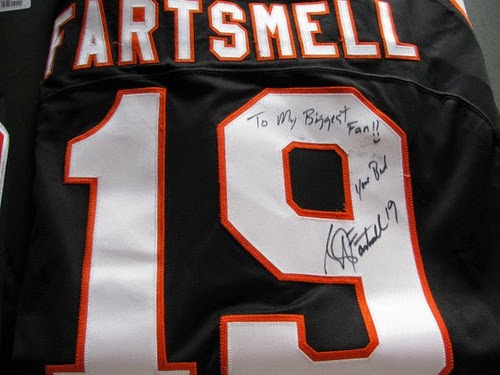