Gigi and I zipped down to Heinz Field yesterday for the Champions League match.  We desperately needed a rebound coming off the heels of the Paul McCartney fiasco.

The crowd was exceptionally colorful.  Plenty of soccer jerseys.  Nice change of pace from the steadfast diet of regurgitated black and yellow.  Tickets were surprisingly sparse.  Not a lot of extras.  We made a sign, but never bothered to use it.

Near the start of the game, this guy overheard me yapping and dug 2 comp tickets out of his wife's purse.  Club level seats (Section 212).  Not too shabby.

Just before the half, some rumbling thunder could be heard.  There were about 4-5 major lightning strikes in the distance.  The ref let it go til the 45th minute and immediately blew the whistle (no extra time).  Sure enough, this ominous message appeared on all the widescreens. 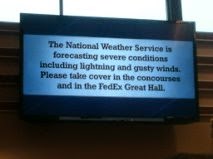 Not really that scary, but most people aren't familiar with obsolete issues regarding emergency evacuation protocol and the potential for "artificially generated stampedes."

We ended up running into our benefactor in the lounge.  Turns out he's an agent for one of the Man City players (Alvaro Negredo).  Of course I took the opportunity to strike up a stampede conversation.  He had some fascinating insight and even mentioned the infamous 2010 Bangalore, India cricket match.  This completely blew my mind.  For those who have no idea what I'm talking about, there was an incident where stadium attendees started receiving "panic-inducing" information from their cell phones while the match was in progress.  The crowd "herded" toward an exit where 2 low-yield car bombs were detonated.  I forget the death tally.  I think it was about a dozen.  It literally blew my mind that he knew about this obscure event.

Heinz Field attendance was listed at 34,347.  A pretty good improvement from the 25,000 the last time there was an international game (Chelsea vs. Roma) in 2004.  The game itself was highly entertaining.  Great end-to-end action for what was basically more of a hyped-up exhibition game.  Man City scored 4 quick goals. and ended up winning 5-1.

In the 89th minute, two raggedy-haired kids jumped onto the field from the Northeast corner.  These Milan fans ran straight toward the midfield.  A larger security dude jogged after them, but they were way too fast.  Anyway, these two made a beeline toward striker Mario Balotelli.  Balotelli was completely unfazed.  Much like his unresponsive, statue-like goal celebrations.  Complete bad ass.

Anyway, the two kids snapped a quick selfie and posted it.  Fascinating how you can make shit go viral in real-time.  Even though they probably got arrested and maybe had their phones confiscated.  Hmmm.  Makes you wonder if there could be severe consequences for more extreme activity... like say I dunno... bomb threats or deliberately false emergency evac orders.  Just stating the absurdly obvious that nobody (except myself) is willing to acknowledge. 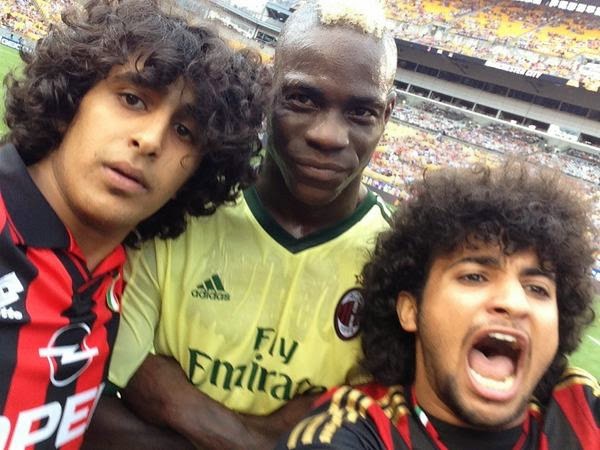 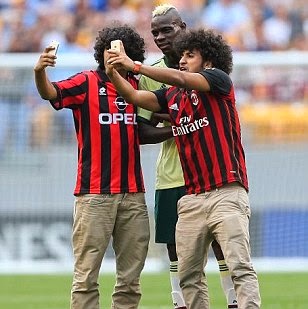 Fun stuff.  The crowd erupted.  Far be it from me to endorse this brand of yinzer hooliganism.  I'll just say "Salut."  So here's a killer 1st season Sopranos scene that encapsulates my appreciation for these two Italians that made the trip dahn-tahn.

So we hung out for awhile after the game ended. 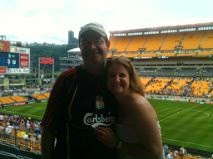 Now, onto Jack White.  The crowd was lined up around the entire Stage AE building.  We milled around for an hour and a half but couldn't seem to find any extras.  The show was completely sold-out.  It was a little after 8pm and we were starting to think we might get shut out.  Not a huge deal as we could have listened to it from outside, but seriously how often do you get a chance to see Jack White.  I dunno --- maybe about as often as Paul McCartney.  Some eerie parallels were beginning to surface.  Earlier we ran into our scalper buddy Tim.  We told him about the McCartney incident and he mentioned that it was the exact same asshole cop who cuffed him as well.  He even mentioned how the cop purposely puts the cuffs on sideways to cause maximum discomfort.  And then he goes into his patented screaming tirade/bullying session.

Not to harp on the Consol incident, but this bowl-cutted mall cop's days are numbered.  We're pretty sure we've got verification of his name.  I rarely make accusations, but this "juvenile pig wannabe will someday be exposed for what he really is --- an authoritarian, power-hungry, douchebag.  Kind of a Pittsburgh version of Kim-Jong Dick Head.

Alright, enough of that tangent.  Onto more important things.  Ticket acquisition.  Just as things were looking pretty grim, Gigi scored a ticket.  BLAM.  About 1 minute later, this guy hands me a ticket.  SHAZAM.

With tickets in hand we headed in.  I'd classify most of the crowd as energized, but respectful.  Seasoned concert goers but still very enthusiastic.  Jack White totally rocked it out.  No concert review necessary.  Everything can be summed up with one word --- SICK.  The rain really poured during the encore.  This was the song I most wanted to hear, but Jack never played it.  But I'm hardly one to bitch.

Here's what's funny.  I went up to the sound guys and asked for a setlist.  A woman behind the soundboard looked at me and giggled, "Oh, don't be silly.  Jack never has a setlist!"  Honestly, I had no idea.  But then I began to reflect on what we had just witnessed.  Seriously, what the fuck was I thinking?  I'm almost as lame as that fake-copper!  He probably thought this was the person on stage. 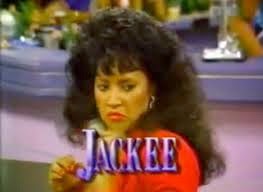 If we could go back in time, he would have made a fine "honky" addition to the cast of 227.  Alright, enough internet bashing.  I've got other things to do.  I'm zipping G to the airport.  She's going to visit her Sacramento friend for a couple days.  And she will arrive on the West Coast bearing a gift from her garden.  T.S.A. --- be on the lookout for a woman with a peculiar tomato that strangely resembles said cop's genitalia. 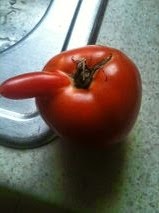 Who am I kidding?  The tomato is vastly more endowed.