Many people stop me on the street and ask, "Hey Saf, what's the new rage?"  I pretend to know who they are and respond accordingly, "Well... selfies and that hashtag crap are quickly becoming passe but the photobomb is here to stay.  (medium pause)  "F'in A."

As far as I'm concerned, the origins of the photobomb can be traced back to the late 90's. 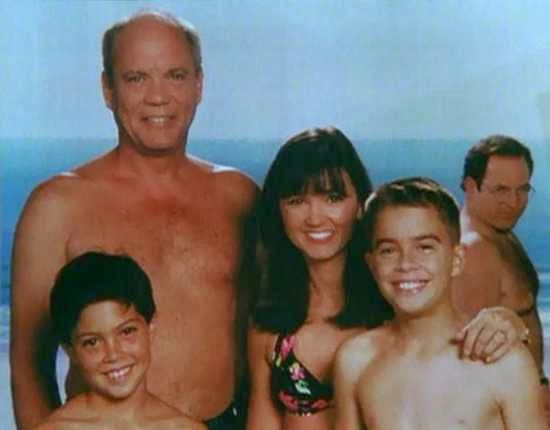 Yep.  It was a shirtless Costanza at the Jersey shore.  All other attempts are trivial and pale in comparison.  Still, humanity forges onward, looking for that epic moment when grandpa's in the background conspicuously scratching his nuts.  Grandpappy don't give a shit.  And I don't blame him.  He's still pissed off that the local Montgomery Ward shut its doors.  "This country's been goin' downhill ever since Monkey Ward went bankrupt!"

For some unknown reason, the art of photobombing completely disappeared during the Bush administration.  Probably because 9/11 left everyone a bit cynical and jaded.  A decade later, it came back with a vengeance.  Nowadays, everyone's getting in on the act. 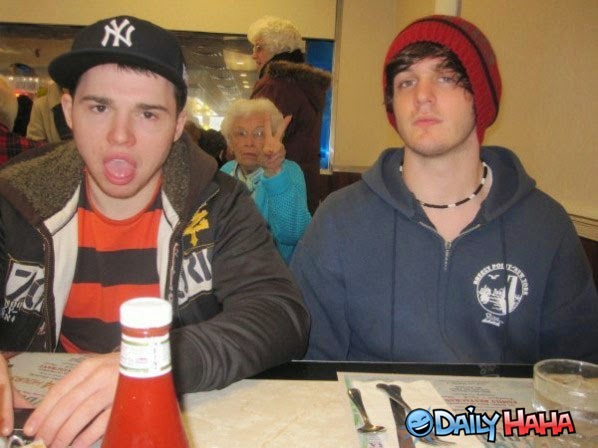 Obviously, the star of this pic is the old lady giving the peace sign.  Even the bottle of ketchup is more interesting than these two "cool for school", hipster Intellivision, thug wannabes. 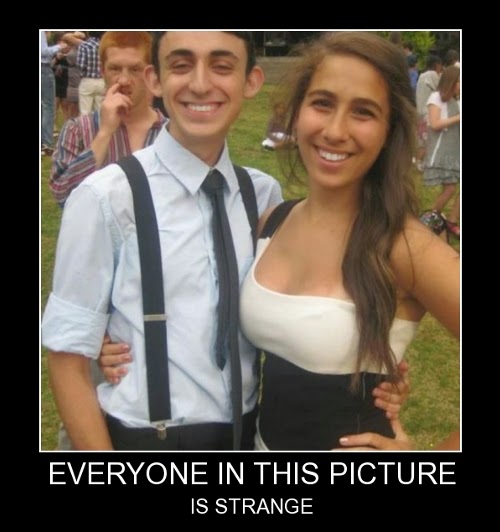 I'm don't really know what to make of Angry Ginger.  I admire his nasal perseverance but he probably should have stayed home and made smores instead of going to the Renaissance Fair.  However, it is nice to see Paul Ryan's (R-WI) son back out on the campaign trail. 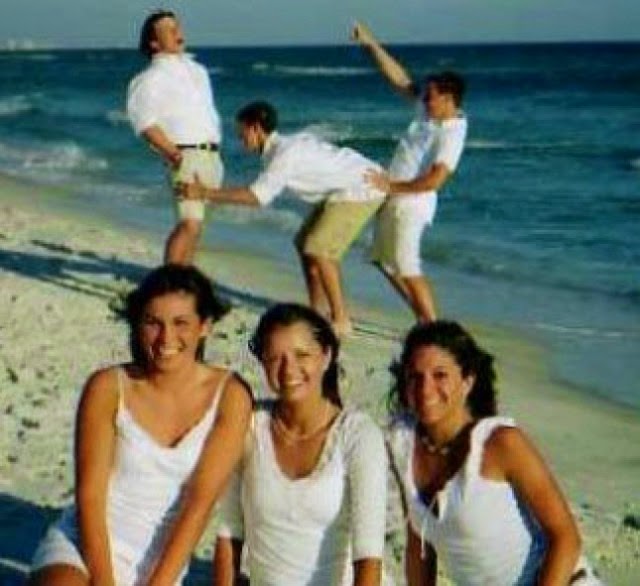 Call me a skeptic, but this one seems staged.  Don't get me wrong...  I'm still supportive.  Just a little bit leery about the "spontaneity" factor.

Now if you want the real thing... 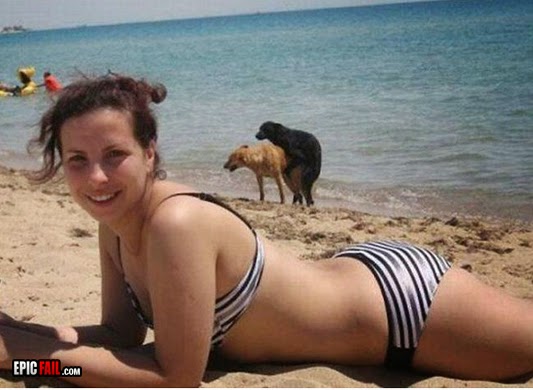 For the love of Palin, that looks more like a young black bear doin' the humpty hump.  How's that "bestie, beastie" treatin' ya?  My take on her "hopey, changey."


These beach scenes are setting the stage for something bigger.  Something new.  Something different.  No... not the introduction of the fruit syrups sold to countless trustworthy morons by the West Virginia Troopers Association Bears Against Drugs Program.

Trust me.  What I'm about to describe will markedly alter the trajectory of society.  Everything will change.

A young girl named May approached me last week and greeted me with a "Hey Saf!"  That's right.  She calls me Saf.  Anyway, she said, "Hey Saf... you sure like to invent new words." I replied, "Damn straight, May!  I've coined a few new words in my time.  Among them is "dominipede" which is a reference to multiple, simultaneous human stampedes.  And I have some phrases too.  Let's see --- There's "artificially generated stampede."  And lemme tell ya something, the term "viral blitzkrieg" appears to be gaining some new found momentum.

These are the words that will define the next generation.  They're already here.  The masses are just oblivious (as usual). 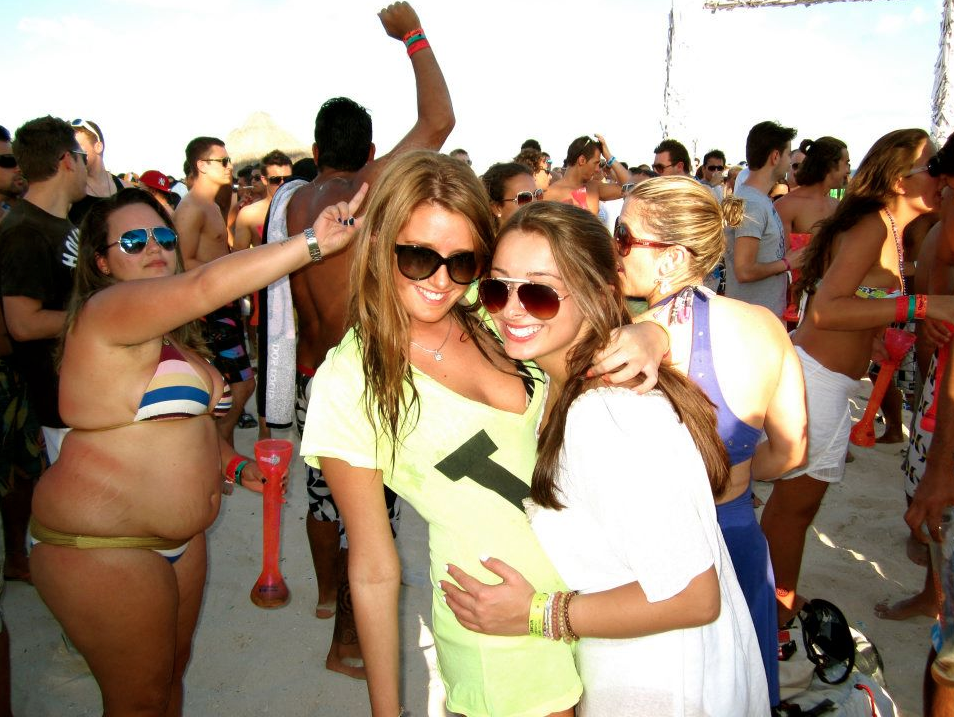 Okay.  Now here we have something called springbreakin' two, electric gunt-a-loo.  Notice how this woman is going for the traditional "bunny ears" photobomb.  But what really steals the spotlight is her formidable gunt.  It's an unintentional guntbomb.  I'm sure she's having the time of her life but the rabbit ears are not her raison d'etre.  Her purpose is strictly gunting in nature.  I call this "goodwill gunting." 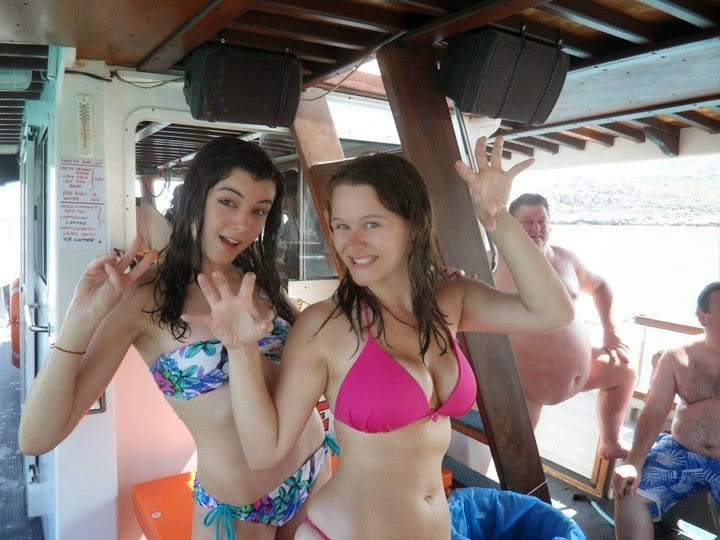 Now here we have a classic gockbomb.  Was there just a smidgeon of malicious intent?  Hard to say.  I'd have to do some lengthy interviews.  Maybe Ralph Barbieri from the Maury Povich show could lend a hand.  "John (for some reason he looks like a John)... when their friend snapped the picture, did you intentionally try to gockbomb these college chicks.  You said no.  The lie detector determined... you are telling the truth."

As I was saying, it's all about the intent.  Now would I be supportive of this? 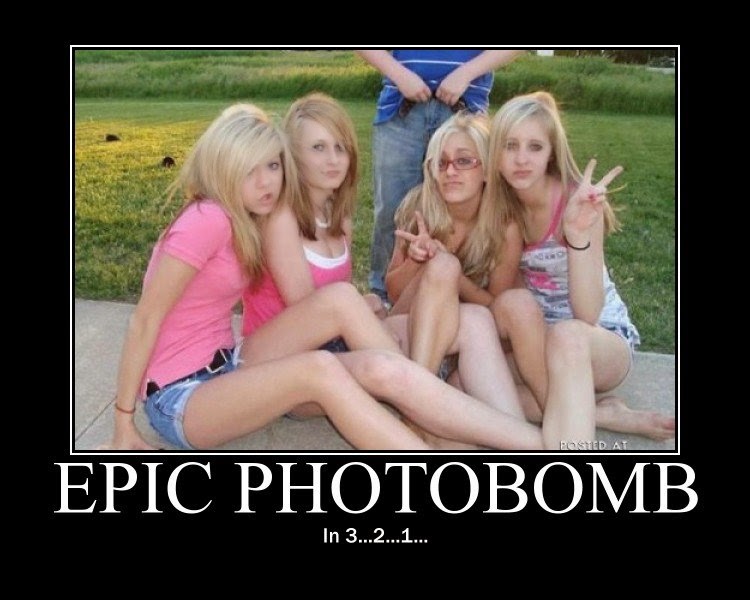 Not really.  But it's close.  Ideally speaking, the kid in the background would weigh somewhere in the 300 pound range.  We could call it "talk to the gock."  A credible gockbomb would necessitate him "surreptitiously" lifting up his shirt.  That is correct.  A casual yet impudent exposure of the midriff.

I've been searching for the perfect adjective to properly define a guntbomb/gockbomb.  And that word is "surreptitious."

: done in a secret way

1
:  done, made, or acquired by stealth :  clandestine
2
:  acting or doing something clandestinely :  stealthy <a surreptitious glance>

Covert, sneaky, underhanded... this is the essence of a true photobomb.

So Saffy, in your mind, what constitutes the ultimate guntbomb?   It's impossible to fathom, but I'd be searching for that historical moment when multiple, corpulent Saudi women form a line of protest against the morality police.  A full-on Burkabomb w/ gunting overtones. 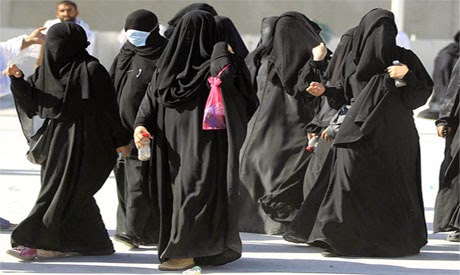 Whether or not they have undergarments on is totally irrelevant.  In fact, some Islamic-tempered granny panties would be ideal.  It's not about the nudity.  Never was and never will be.  It's all about the gunt.

Now this Jew (me) has no desire to visit the holy land.  I have no interest in going to Israel.  And that has nothing to do with the recent ban on U.S. flights into Tel Aviv.  Seriously, why the fuck would anyone wish to voluntarily visit the Middle East?  What the fuck is wrong with people?  Qatar - I'm speaking directly to you.  If your 2022 World Cup isn't overturned, I'll just have to take matters into my own hands.

Now since I refuse to travel to the cradle of civilization, I'll have to settle for the U.S. equivalent guntbomb.  After considerable reflection, I have found the perfect lineup of female candidates. 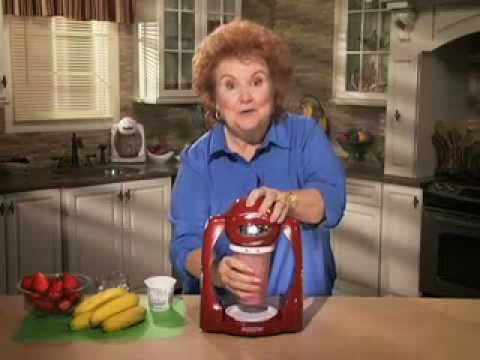 Call me anything you want.  Just don't call me a misogynist.  Here's the fellas... 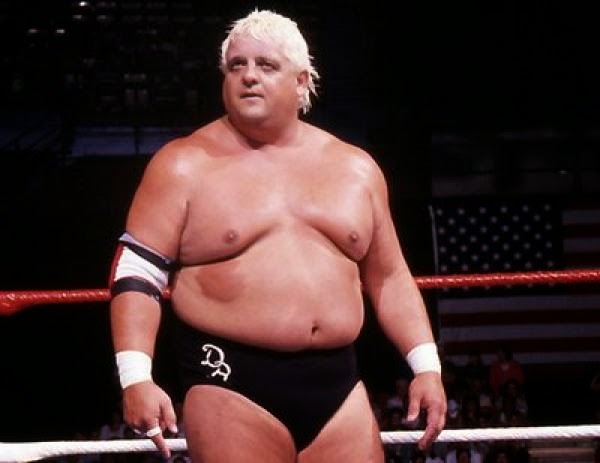 I totally forgot to mention my purpose or "mission statement."

This is a call to arms. Take matters into your own hands. Photobomb the hell outta anyone and anything. Puts those gunts and gocks on display.

You need not weigh 400+ lbs. You can be an anorexic skeleton for all I care. To paraphrase a Chuck Billy (lead singer of metal band Testament) --- "Get those gunts up! Ohh, there's a couple. Yeah."

I think you are up to some "hopey changey" ideas of your own! Good luck...I like it...it makes sense. Gross. But I can dig it. See you soon!–Gig