Back in 1994, a short, stocky, slow-witted bald man decided to do everything "the opposite."  His name was Costanza.  Even non-Seinfeld fans have a vague recollection of the season finale where George undergoes one of the most vivid transformations in the history of modern television.  I happened to watch that episode the day before the Pittsburgh Marathon and it triggered something deep within my soul.


Long story short, I came up with an idea that would irreparably alter the course of humanity.  I invented the concept of "reverse bandit."

First, a brief explanation.  I've been a runner since high school.  Cross country, track and a little soccer.  I wouldn't classify myself as passionate or obsessed.   I'm more of a part-time exercise enthusiast.  But I have stuck with it for the past two decades.  Mostly in the 5-10 kilometer range.  Keep in mind, I've never seriously considered the notion of doing an entire 26.2 mile marathon.  It's just way out of my league.

Some additional background.  The Pittsburgh Marathon was recently ranked #8... on the planet earth.  That's right.  Outclassing races in Tokyo and San Francisco, even Paris and London.  We may lack the Eiffel Tower and Big Ben. But we do have the U.S. Steel Tower and Big Ben.  Huzzah.

Now for those unfamiliar with the jogging industry, there's a derogatory term for people who enter a race without the proper credentials.  They're called "race bandits."  They don't pay the fee.  They don't sign a waiver.  They don't get a numbered tag.  They just show up and run.  Many have the audacity to snag a bottle of water and some will even smile while consuming an Eat'n'Park cookie.  People who do this are generally not well-received.  The closest approximation would be something along the lines of a "volunteer scab."  Blah.

Lest ye forget, the inspiration for this article is grounded in the George Costanza metamorphosis.  As I reflected on that Seinfeld episode, a crazy idea popped into my head.  What if I were to do the entire marathon... but do it in reverse?  Walk not run.  Start at the finish line and finish at the starting line.  Just do everything the opposite.  The mere thought of this was like getting a B12 shot.  Let's just say... I think it moved.

So I searched on all kinds of phrases.  Reverse marathon, backwards relay, inverted racing, intransigent bandit and so on.  But nothing came up.  This left me even more determined and resolute.  I was going to be the first ever pseudo-official reverse bandit.  I was going to go where no runner had gone before, n'at.

As far as preparation went, there's not much to describe.  I went to the official website and printed out the precise directions and a nifty map.  Roughly twelve distinct neighborhoods winding through the city of Pixburgh.  I figured the whole escapade would last about 6 hours.

Sunday morning May 3 came early.  Fortunately, my girlfriend wakes up for work at 5 am on the weekends.  And since she was heading downtown, it was a perfect fit.  She could drop me off directly at the finish line.

The majority of runners choose to "carb up" with an intravenously administered, liquified entree of fettuccine alfredo.  However, I opted for chicken salad, on rye, untoasted, with a side of potato salad and a cup of tea.  Just kidding.  I had a slice of pumpernickel, a hard boiled egg and a cup of coffee.

When most runners prepare for battle, they spend plenty of cash on electronic gadgets and expensive attire.  I on the other hand had some grass-stained tennis shoes, a bottle of water and a handful of napkins.  No cell phone, no money, no ipod, no keys, no identification, no nothing.  On second thought, I had two things.  A hastily emblazoned t-shirt with the term "reverse bandit" and something else of far greater significance.  My mission, my purpose, my cause.  For the last several years, I've been an ardent supporter of AGSAF, the Artificially Generated Stampede Awareness Foundation.  No time for a thorough explanation.  Suffice to say, it ain't the Human Fund.  If you wish, feel free to google it on the internet machine.

Now from what I've heard, the most important thing one can do before a big race is get a good night's sleep.  Instead, me and the woman went to an outdoor Hall & Oates concert at Stage AE.  In the shadow of Heinz Field, that venue rarely disappoints. 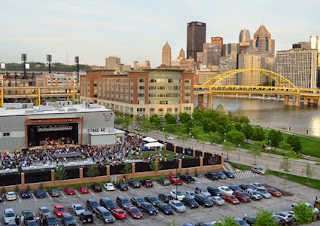 Gigi dropped me off right on schedule.  5:30 am at the Boulevard of the Allies (how prophetic --- I'd need all the help I could get).  She gave me some added inspiration with a prepared written statement.  "Eric, most people think you're out of touch.  But I will always encourage you to do what you want, be what you are.  Say it isn't so, but you make my dreams come true.  And while I wanted to join you this morning, I just can't go for that."  We both chimed in unison, "no can do."  She then gave me a kiss and wished me luck.

I headed up Liberty Avenue through the Strip District with a moderate pace.  It was cold and dark.  Keep in mind, I was doing everything in reverse so except for the police, emergency med techs and race volunteers, the course was largely deserted.  A few miles in, the sun began to rise.  Soon after would come my first meaningful encounter.  I was accosted by an elderly hippie sitting on a Victorian porch near the intersection of Friendship Avenue.  He beckoned, "What the hell does reverse bandit mean?"  I explained how it was a burgeoning concept in alternative competition.  I clamored back, "It ain't all about fame and fortune.  Reverse bandit is here to stay.  It's the wave of the future." 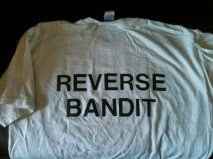 He heckled back, "Ya know, we're living in a society!  We're supposed to act in a civilized way!"  I told him I didn't think his behavior was representative of the Friendship community in which he resided.


This was no ordinary hippie espousing peace and love.  Quite the contrary, I could sense his seething bitterness and pent-up rage.  And lemme tell ya something, he sure was angry that day.  Like an old man trying to send back matzah ball soup in a Squirrel Hill deli.  So much for Woodstock and freedom rock.  I journeyed onward.

On the outskirts of Homewood, I glanced at a homeless man in an alley.  He was eying up my plastic water as if it were a bottle of Dom Perignon.  I wished him a pleasant afternoon but he snarled back, "Can't stand ya."  Considering the recent spate of negativity, I started to wonder if I should just quit.  Maybe this wasn't all worth it.

By the time I hit Shadyside, I made first contact with the para-cyclists.  Then a trio of elite male athletes passed me in Oakland.  Things were starting to pick up.  The concentration of runners was growing more dense.  An old high school friend spotted me and yelled my name.  I hollered back, "TARRAGON!"  Note: his last name has been altered to protect against any affiliation with those deemed undesirable (me).

As I approached the Birmingham Bridge, everything turned into a sea of absolute chaos.  It brought to mind images of stampeding wildebeests along the Serengeti.  Everyone coming directly at me, pounding the pavement, jostling for leverage and position.  I tried to keep an eye out for people I knew, but the mass of humanity had a dizzying effect.  So I stuck to the sidewalk and focused on the path forward.

Fun fact for you.  The Pittsburgh Marathon incorporates four bridges, crossing three landmark rivers.  There's the Allegheny, Ohio and the Mon (pronounced Mahn), short for Monongahela.  Hey, there's nothing wrong with a little geographical enlightenment.  Even the oil and gas industry has fallen in love with our scenic waterways.  Go figure.  Drill baby drill.  Seriously, what the frick/frack is/was that?

I began to sense a growing trend.  Many of the runners were evolving into alternative life forms.  There was Batman, a sumo wrestler, the infamous Super Bowl Left Shark, a couple of giant hot dogs and even the Greatest American Hero which triggered that memorable 1981 theme song in my head.  "Believe it or not, it's just me."  Reminiscent of an answering machine from a man who's self-described as totally inadequate, completely insecure, paranoid, neurotic.  He even used to wear a toupee.  I'd give him a ring, but I think he'd screen me out.  "Believe it or not, I'm not home."


As I ventured deeper into the Southside, I spotted a maniacal, shirtless freak.  Covered with tattoos, chiseled with bodily piercings and sporting earlobe discs the size of frisbees.  He was repeatedly screaming at the top of his lungs, "Yinz got this!  Yinz got this!"  I think everyone has had an encounter with one of these reptilian imposters.  Let me be honest.  I'm a social liberal who's very accepting of others, but the lizard people really bother me.  I think it's a combination of distasteful annoyance and abhorrent revulsion.

Slowly but surely, the crowd began to dwindle.  All that remained were some vigilant sanitation workers cleaning up a gazillion discarded cups.  By the time I reached the beginning of the West End, I was alone again.  I carried on through the North Side, clutching my directions.  I remained beholden to a simple theory.  Every direction was the opposite.  Right was left.  Left was right.  Up was down.  Black was white.  Good was bad.  Day was night.

In considerable pain, I made my triumphantly twisted return to the Strip District.  A blister had formed on my left foot.  My neck was sore and my back was killing me.  But I had finally reached the starting line.  The sound of silence reverberated.  Hooah!  Or in this case HUA, the Marine slogan which stands for heard, understood and acknowledged.  I felt a calm sense of reassurance despite being actively denied all three prior characterizations.

Suddenly it dawned on me.  I didn't have a ride home.  So I hobbled over to the definitive finish line.  The crowd was enormous.  The runners alone easily tallied over 30,000.  Factor in family and friends and the Point State Park throng was likely in the range of 100,000.  By some sort of Sunday miracle, I spotted my old friend Tarragon.  Turns out he was heading to the airport which was in my general homeward direction.  Let's just say it takes a very special kind of person... who's willing to pester someone that just ran 26+ miles.  My exact words, "Dude, you gotta gimme a ride, man."

On the way home, we had a fascinating discussion about asymmetric national security threats, the proliferation of cellular technology, wireless hyper-connectivity, situational awareness, civil rights and generational warfare.  We even talked about my decision to embrace the role of reverse bandit.

I asked him, "Hey, I'm just curious.  As a legit marathon runner, what's your honest opinion of this whole reverse bandit thing?  Is what I did okay?  Or am I just living a lie?"


Tarragon continued, "I gotta be honest, I think what you've accomplished deserves some kind of recognition.  You just need a hook.  As far as Pittsburgh goes, everyone knows about the immaculate reception.  How about we label your disturbing achievement as... the immaculate rejection?"

Hmm, that has a nice ring to it.  I think I'll secure the domain rights.


Incidentally, if you happen to know a marathon runner who enjoys Seinfeld humor, feel free to share this blog.  Unlike the television show, this isn't about nothing.  It's about something.