Thirty years ago, it was 1986.  I was heading into the 10th grade.  Seems like just yesterday.  Well, not really.  I find myself slowly going bald, mostly in the back.  Never thought that would happen.  I just figured I'd always have a full head of hair.  Not much I can do about it.  I don't see myself as one of those guys who parts their hair on the side.  The Republican political establishment comb-over doesn't really suit my personality.  Ya wanna know something?  Fuck it, I'll just wear a ball cap.

Anyway, back in my high school days, I had an idol.  His name was Stephen Pearcy, the lead singer of Ratt.  They had just released Invasion Of Your Privacy which in my opinion was one of the best albums of the late 80's. 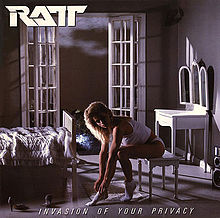 Say what you will about the metal bands of yesteryear.  Yeah, the lyrics weren't too thought provoking, but who gives a shit.  Some of the best live albums came from that time frame.  Iron Maiden - Live Before Death, Scorpions - World Wide Live, Judas Priest - Priest... Live, Queensryche - Operation LiveCrime.  Funny how all of them needed to reinforce the word "live" in the title.

I only saw Ratt one time.  Bon Jovi opened for them at the Wheeling Civic Center.

I sneaked in an old school Panasonic tape recorder into the concert.  The guy felt it during the pat-down but I begged him not to say anything... and he let it slide.  These days, they'd probably alert the FBI and call in the Department of Homeland Security.  I still have the tapes to this day.  Odd how I've managed to lose all of my metal t-shirts, about 20 or so, but still clung to the TDK SA 90's.  They sound absolutely horrible.  I wonder if the technology exists to run them through a computer program, eliminate the hiss and background noise... and somehow "extrapolate" based on the "music."  I'm a little vague on the specifics but that would be some technology I could grow to appreciate.

Not to sound melodramatic, but the 1986 Ratt concert changed my life.  It was pretty much my first "legitimately unchaperoned" rock concert.  When asked by my fellow concert going buddies what I thought they'd open with, I gave it some thought and said "Dangerous But Worth The Risk."  Turns out I was correct.  This was well before the you clicked on the internet set lists.  It was just a hunch.  This spawned my interest in the concert prediction game, and to a lesser extent sports wagering.  It made a better Dead fan too.

A few months ago, me and Gig saw the former drummer (Bobby Blotzer) of Ratt with his new band at Jergel's in Warrendale.  By the way, Blotzer actually hails from nearby Turtle Crick.  The show itself was worth it, meaning we came late after the opening act and skipped the cover charge.  The singer was decent but just didn't have Stephen Pearcy's distinctive, rusty vocals.

Anyway, sensing I'd never see them again, I took a solo trip to Kent, Ohio last night.  First ever visit to The Kent Stage.  It's a dusty, old vaudeville theater that has been half-assed refurbished.

Plenty of placards on the wall.  Performers who had previously played the theater.  Hands down, the coolest one is a Les Claypool doodle.  He was obviously in line behind a talkative guy placing his order at a nearby burrito shop. 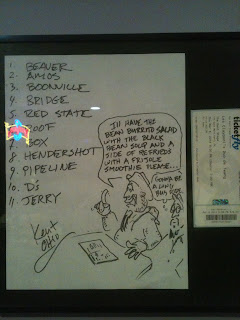 The remains of the band Warrant opened the show.  Back in the day, I thought Warrant was pretty expendable.  As a hair band, I'd rank them a little better than Cinderella but not as good as Dokken.  Just my opinion.

No crazy stories to report.  I ate some really poor Spicy Garlic wings from BW3's.  Has anyone else noticed the severe drop off in quality at B-Dubs?  Yes, the wings are bigger and meatier, but I think that actually makes them worse.  And they were totally drenched in a different kind of sauce.  Major disappointment.


Just before Ratt took the stage, I walked up to the front railing.  Here's most of the set list.


You're in Love
Lay it Down
Lack of Communication
Wanted Man
Slip of the Lip
You Think You're Tough
I'm Insane
You Got It
Back For More
Way Cool Junior
Heading Out To The Highway (Judas Priest cover).  This was very unexpected and infinitely cool.
Round and Round

They threw in a new song that was pretty strong. 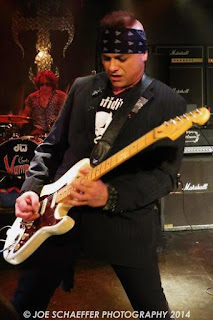 Pearcy sounded way better than I had anticipated.  I'd heard a bootleg of him from a 2012 Merriweather Post Pavilion show in Columbia, MD.  He sounded so bad that it bordered on comedic.  Not so, last night.

The crowd really showed off its age.  At 46, I was one of the younger people in attendance.  Lots of old school jean jackets and back patches.  Plentiful baldos and haggard greasers and even a token mega-titted bleach blonde groupie.

Even zanier, I actually bought a ticket from the box office ($22.00).  Couldn't bring myself to haggle.  Regardless, there wasn't much action out front.

So I skipped out on the WVU/Gonzaga game and more importantly, the Teen Master Chef kids episode.  My childhood friend's daughter (Cydney Sherman of Brooklyn, NY) has been on the series, cooking up a storm.  I'm hoping she didn't get cut last night.  She seems to be one of the better personalities.  I have a hunch she'll go deep in the competition.

Dedicated to my faithful follower --- DBV.