how to destroy every golf ball company


With the creative assistance of The Wreck Sandwich from Chicago Airport (Midway), I have conceptualized a powerful idea.  This one deserves some kind of lofty acknowledgement.  Whether it be Pulitzer or Noble Peace Prize, I do not care.  But it deserves some degree of acclaim.

Wreck Sand carries a sharpie marker in his golf bag.  He occasionally will take a brand new Calloway and inscribe a profane word.  Usually something related to slang genitalia.  Finding a golf ball in the woods with the word "CUNT" on it... well, I think it would make for a more memorable golfing experience.  Imagine the glee and sense of wonderment one might have.  Regaling everyone at the bar later that evening and reliving the precise moment when you found a ball that said "Titliest TITTY."  Surely most people would switch balls.  I know I'd rather use the one with the cussing on it.

And then, imagine if your game soared to new heights!  You'd have this pivotal moment, this "act of god" turning point that propelled you to victory.   "I wasn't playing all that well until I went to take a piss in the woods and saw this golf ball.  I pick it up and guess what... The damn thing says "Top Flite TWAT" on it.  Yeah... that's what I'm talking about mother fucker!"  Even a high school kid from Linsly would agree.  It's a win-win.

Alright.   Since I'm the first person to ever push this idea into the mainstream world of golf, I'm going to lay down some specific ground rules.  First, I want every decent pro shop in the country to sell cheap black Sharpie markers.  I don't think that's asking too much.  Probably for a buck ninety nine or maybe $2.49.  In this case, you can only gouge so much.  For the love of god, it's just a marker.

My other decree.  I get to assign ALL the new golf ball names. This additional curse-word must be either one or two syllables because it just makes sense.  The word itself can only be 4 or 5 letters.  I don't know how to explain this one.  I just know I'm right.  And the first letter should always be the same as the brand.  The alliteration just offers way more continuity.  For example...

There can only be one exception.  After hours of deliberation, it must be Srixon CUNT.  It just has this commanding resonance and blunt delivery.

I'm actually having this major debate inside my head right now - whether to get some golf balls out of my car and write the shit down.  I believe I will.  Not really for the glory aspect, but assuming this becomes the "trendy, cool thing to do," I just want it on the record that I crippled the coveted brand image of every golf ball company simultaneously.  Golf originated in the 1600's in Scotland.  It has been a long journey.  And then along came the Ultra URINE. 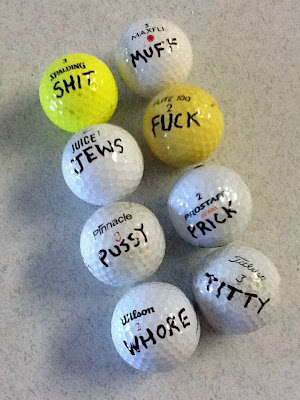 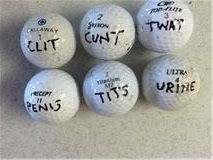 If you really think about it, this idea is just a spin-off from advanced "CUM" Dumpster theory 101.  The dumpster being a proud focal point of concert and sporting events.  The furious consumption and tossing of the bottle into the metallic dumpster.  THUD!  The same noise would be heard at the corporate headquarters of Titliest and Top Flite.  It's the sound of their senior marketing VP having a panic attack and hitting the floor like a ton of bricks.  All those years spent developing their brand - vanishing in an instant.  And all it took was an open mind and a willingness to embrace something  fresh and innovative... and a Sharpie marker.

If you find a logo free ball, could you simply just write GOCK? Or GUNT? Or possibly both?
Gig

Not many logo free golf balls these days. Well, except maybe on the miniature golf circuit.
My idea is more about tarnishing a golf brand. Gig's idea sounds like it's all about shock value (which as you know, I would find abhorrent).