I originally intended for this blog entry to revolve around my Saturday football adventures with Gigithon. But something of greater magnitude took place this Sunday morning.  So I'll briefly recant yesterdays' adventures.

We made our way down to Heinz Field for the Pitt (lame) vs. Notre Dame (gay) game around 10am.  It was an early noontime kickoff.  Snagged our usual spot in the crack district and walked down.  We hooked up with her friends for some high-end breakfast tailgating (filet mignon, various potato casseroles, etc.).  I briefly scribbled a sign that said...

"I HATE BOTH TEAMS BUT...
I STILL WANT A FREE TICKET"

I left the sign behind - probably a wise decision.  Since I was wearing a Mountaineer shirt, I anticipated a substantial uptick in negativity.  "You're at the wrong game, asshole."  "2007, dickhead."  "See this neckbrace?  I got it from bashing in the heads of WVU fans."  And of course the traditional "You suck" comments.  Most people would not welcome this kind of crass negativity, but I actually enjoy it.  It keeps you alert.  And you can channel all that hatred into scoring free tickets.  Think of it as green energy.  Like harnessing the power of the sun through solar panels, or taking advantage of the wind with a windmill, or using oil... for your Exxon ass.

Once again, Gig stepped up her game in the ticket acquisition department.  I acted as more of lightning rod... kind of like a Bounty paper towel absorber of putrid disgust.  I'd get their attention and she seemed to lighten the hostility.  It worked pretty well.  First we snagged 2 free singles.  Then, we snagged 3 pairs of tickets.  We sold each pair for $20, $20 and $19.  Not bad - another $59 into the coffers.  Plus, Gig scored roughly a dollar of loose change on the ground.  She found it on the ground.

We hung out til about midway through the 3rd period and bolted for Mo-Town for the real game.  We got there around 4pm and hooked up with Slosh and GMax.  Another strong display of sporting nourishment, this time compliments of GMax - pulled pork sandwiches with coleslaw.  The coleslaw was bursting with country fresh flavor (Seinfeld).  And he also proffered a bag of Grandma Shearer's unflavored kettle chips which were relatively satisfying.  This bag of neutral-tasting chips seemed to provide a nice balance due to the crunch factor.

We looked for tickets, but to no avail.  Most singles were going for about $100 and there were a ton of people with their fingers up.  It almost seemed like a Dead show at Mountaineer Field.  A high energy level without the overwhelming stench of patchouli oil.  We weren't having much luck, but then suddenly, Gig spotted an unused ticket on the ground.  Bam!  It was a Mountaineer Miracle!  We continued our quest for the other freebie but there was just too much competition.  I'd never encountered this amount of demand for a WVU game.  Plus, we aren't willing to pay for shit - that didn't help our cause.  So we sold the groundscore ticket for $50 (mostly as a favor to an engaging older gentleman).  Then we bolted for Wheeling.  Stopped for pizza from DiCarlo's (6 ends with extra cheese - we each devoured 3) and miraculously made it back home during the early stages of the 3rd period.  Plenty of time to thoroughly scrutinize their gradual demise.  However, let it be historically noted that the crowd energy in the third, just before the heartbreak LSU touchdown kickoff run-back was completely bad ass.  Sick.  Should have torched the stadium (instead of the couches).  They should make an athletic director Oliver Luck human size blow up doll and tie it to a couch.  Maybe give it some kind of sadomasochistic theme w/ the dripping candle wax bit.  The shit loses containment and everything goes up in hot flames.

But this blog was supposed to be about a Fuckface revelation.  On a day that will live in infamy... Well, it really wasn't that infamous.  Truth be told, it was a day of utter jubilation.  Anyway, about a year ago, I saw it.  The listing.  House of Fuckface - FOR SALE.  I immediately zipped down Ridgewood to the people who feed me, clothe me, bathe me.  "You're never going to believe this!" as I slammed my keys on their living room floor.  "He's selling the house!  Fuckface? Fuckface? FUCKFACE !!!"  (short pause)  For the love of god, this is really happening!"  They were fascinated by my outburst but seemed pensive and cautious.  They didn't seem to share in my golden ticket neighborly American Idol moment.  Or maybe, just maybe, they knew the real truth.  That his exit from my life would be a longer process.  And as (Oliver) luck would have it, they were right.

So yeah, all that happened about a year ago.  Well, today I jogged down to the coffee shop.  I stop in to get a napkin to blow my nose.  Then, I check the Sunday paper.  I've been dutifully checking the real estate listings for the past year.  Finally... today was the big day.  Ka-Pow! He substantially dropped his asking price.  I'll refrain from the real numbers but I will say he knocked off 14% (fitty) from the asking price. A promising moment for said Fuckface... bringing himself into the world of real human beings.  Just one rare chance for the briefest acknowledgment that others exist on the planet earth.  After all, the theory that Fuckface's house is the "center of the universe" was disproved back in the days of the Salem witch hunts.  And he bought the place in 1998.

Proceed cautiously to this morning.  I have a bunch of the blueprints for my house.  I've always thought it might be cool to tack them up on the walls.  After all, they're a very accurate source of architectural information and the prints look pretty damn sharp.  This would be Gig and I's home decor project for the morning.  Well, we begin to assess 'what goes where' and all that jazz.  For the love of God (aka Fuckface), the blueprints are for HIS house.  Not mine.  We never noticed this.

So despite his desire to depart, and as a lasting tribute, Gig and I hung all the prints up in the staircase area.  It looks way better than these shots.  You have to see it to believe it.  Or in the worst absolute case scenario, you have to acknowledge the existence of Fuckface.  Fuckface and I  live together on this spiraling planet.  We are linked in close proximity as we aimlessly hurdle through the universe.  How quaint.  This art project signifies all that is Fuckface.  And I will call it "sonofFucked."  Not to be confused with the sonofsucked compilation cd. 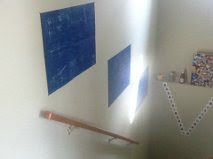 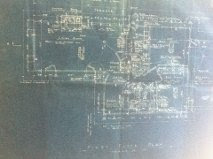 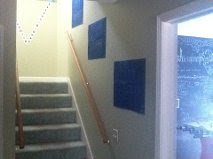 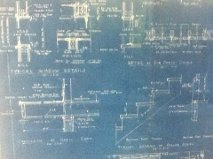