Every so often, I hear the question.  "Saf, what would you do if you won the lottery?"  Suffice to say, it pains the questioner when they find out I'm not interested in buying a ton of shit.  Oh boy... imagine the possibilities.  I could buy that 14th century decorative Torah.  This could help reinstall my Jew heritage.  It'd be the equivalent of immersing myself in the Dead Sea, like a frugal baptismal.  Or maybe I'd hire one of the Mitt Romney sons to perform sadomasochistic sexual acts on Senate Minority Leader Mitch McConnell.  Probably the smiling kid named Tagg.  He emailed me several times during the campaign.  Haven't heard from him lately.  I miss Tagg the most.

Seriously though, how would I spend the gobs of cash?  I like the idea of purchasing large amounts of utilitarian items.  Cases of bottled water, plenty of bleach, isopropyl rubbing alcohol and hydrogen peroxide, unflavored instant oatmeal... you know, the good stuff.

Alright, so I just found out I can still get a ticket.  I thought they did the drawing on Tuesday night.  I like the German version of this Simpson's clip.

But now it's $2.00 instead of a buck.  What a fucking gip.  Have the venerable lotto people no shame?  I could have bought a McDouble and a small fry (consisting of 14 french fries - they really screw you with that diminutive, flimsy wax paper container).  But nothing hurts more, nothing cuts like a knife, than buying an extra large fry - you get it and it's only 2/3 full. 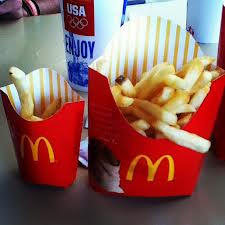 Now that's a McHate crime.  Ain't got nuthin' on the fuckin' Hamburglar.

So what am I gonna do with the loot (of course, this is after the noble U.S. government and great state of West Virginia take their well-earned cut from my hard-earned lottery ticket purchase)?

10) I would hire a group of trained Navy Seals to eradicate the stank groundhog that lives underneath my house.  They can wrap him in this Crown Royal blanket

and dump the carcass in the Ohio River.  I think we'll need a group that understands the value of asymmetric warfare.  The tactical challenges presented by this "Lex Luthor of groundhogs" are difficult to quantify.  Some intriguing lineage in his groundhog family tree.  Grandpappy Hog used to espouse themes of Ohio Valley domination.  And Grammy Hog was once charged with "treason" by the Department of HomeHog Security.   Her crime - she shat where she ate.

9) Next up, I would buy my neighbor's house. 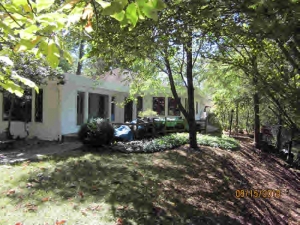 Then, I would purchase the Cadillac of a local, elderly woman.  Yep, you know what's coming.  I would drive that car straight into the pool... and leave it there.

8) Speaking of cars, "Saf, what kind of flashy, brand new car would you buy?  How about the hottest X666, Z69 super-turbo, quadro-powered Crossfire Hurricane?"  Honestly, I don't see this happening.  However, I would pay someone to fix the bumper on my 2001 Outback.  And we could fix Gigi's bumper on her '95 Civic.  We seem to have these non-desirable, but seemingly incurable bumper issues.  But honestly, I might finally buy a shitty golf cart.

7) This is a big one.  I would seek to eliminate any visible demonstration of the Christmas holiday within a surrounding 10-mile radius of my home.  How would I accomplish this feat?  Well, I'd go door to door and pay neighbors to remove their Christmas decorations.  Inflatable Walmart Santa Clauses would fetch a fitty, manger scenes bring in the Benjamin. 20 bucks a wreath sounds fair.  I would also buy up ALL the nearby presents and donate them to the undeserving children of Kenya.  Sensing an Obama gift-giving, global redistribution conspiracy, this would infuriate the local right wing churchies. 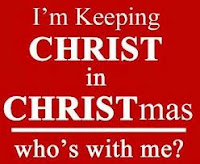 6)  I would also purchase every available Christmas tree and host a massive tree burning ceremony.  You've heard of book burnings.  Well this is kind of similar, except it's thousands of Christmas trees.  And I'd hire some of the finest musicians from out the crick.  Time to crank up a classic rendition of "Throw a-nudder tree on the fahr"

5)  I would purchase every available Steelers ticket I could get my hands on.  And I'd buy them in advance.  Yup, the two lamest words ever uttered by the humanoid species.  Then, I'd freely distribute them to every homeless individual in the city of Pittsburgh.  Ohh, the games people play.  It be gittin' all twisted up in da Burgh n'at!  Heinz Field be lookin' all krazy up in the hizzy!

4) I would hire my own team of dedicated "yuletide carollers."  But they'd only be allowed to sing Slayer songs.  "South of Heaven, Behind the Crooked Cross, Hell Awaits > The Antichrist...  you get the gist.  For some reason, I like the notion of everyone singing the lyrics acapella.  Think in terms of a Slayer barbershop quartet.  "Bastard sons begat their cunting daughters, promiscuous mothers with their incestuous fathers, ingrained souls condemned for all eternity..."

3) At my official press conference, I would only field questions regarding religion and politics.  You know how from time to time the public despises some douchebag who wins the lottery.  The arrogant asshole, the welfare queen, the white trash Nascar dumbshit, the guy who doesn't speak English, the guy who was already super-wealthy... Well, at my big press conference, I would only take questions concerning the two most ill-advised, divisive topics (religion and politics).  Afterwards, I would spend absurd amounts of money on television advertising.  The purpose of the ads - to lambast the lottery itself.  The absurdity of low-income monetary recycling would be exposed in great detail.  And I would openly ridicule anyone who engages in this mindlessly driven, government sponsored form of gambling.  How's that for an ongoing public relations nightmare?

2) Next up.  I'd hire every local mall store Santa and Jerry Garcia look-a-like.  That's right.  I'd put them all on the payroll.  Transport them to the newly refurbished Ohio Valley Mall.  Remember the Salem Witchcraft Trials of the late 17th century?  Well, I would line 'em all up and put 'em on trial for accused crimes of mall store pedophilia. 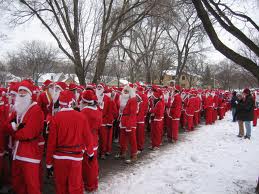 Let the record reflect that on Saturday, December 24 at 10:04 am, young child Ethan sat on Santa's lap.  GUILTY!  Let the record reflect that during the week leading up to Christmas, the defendant uttered the phrase "Ho-Ho-Ho."  It was directed at a group of young girls purchasing Miley Cyrus posters.  Attempted solicitation to engage in overseeing an underage prostitution ring.  If that one fails, just nail 'em on the conspiracy charge.  (conspiring to represent themselves as the real Santa Claus)  Either way, the verdict is in... 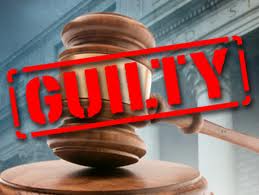 1) "Saf, how about shutting down the entire Oglebay Festival of Lights?"  Nahhh.  That's way too low-brow.  I'd execute a far more hate-driven operation.  I would pay individuals to feign "car break downs" at the most vulnerable traffic choke-points on route 88 and various other locations throughout the park.  You know that 4 hour long, bumper-to-bumper trek through a Christmas winter-wonder land.  Well... now it's 8 hours.  Enjoy.

Honorable Mention: I'd buy all the sugar cereals at every local grocery store for a period of one year.  Do you see this disgusting shit?

I wish for the neighborhood children to experience sugar cereal deprivation for the duration of one calendar year.  The ultimate accrual of annual joy.

Alright, alright...really? The crown royal blanket is what you would choose to bury the varmint in? Not that disgusting pee stained futon cover?? BOO HISS!

Oh, and maybe you could hire someone to make an ad about warning people of the potential for an artificially generated stampede...that way, when it happens people would BE PREPARED?? Just think you could flood the airwaves with your hypothetical.

In regard to the BE PREPARED idea - I'm not sure if anyone remembers this, but immediately following 9/11, these "BE READY" billboards popped up everywhere in Wheeling. I suppose the govt. had this huge influx of money designed to combat terrorism. When they figured out there's only so much you can do... well, the money started going through the usual channels (spending $ on futile advertising designed to educate/scare the general public). U.S.A.! U.S.A.!