According to my laptop calendar, today is Diwali.  Comparable to the Oglebay Festival of Lights I suppose.  Perhaps of slightly bigger magnitude.

For this parody to make any sense whatsoever, it's best to familiarize yourself with these two brief Sopranos scenes.

So without further adieu...

[Intro]
This is going out to Somalis everywhere. It's a tribute to one of the greats...Mr. Adam Sandler.


[Verse 1]
Somalis are dark.  Most aren’t very white.
Steaks made of venison
They kicked his ass in broad day light

[Chorus]
Nobody said sorry
Beat the hell out of a Somali
AJ’s feeling melancholy
Over the beatdown of Somali
Maybe they had all taken Molly
His bicycle was trashed Somali
They should act more like Gandhi
Black Hawk Down had a ton of Somalis
Along came Paulie
Walnuts is not a Somali
His father was run over by a trolley
Here’s to crappy, crappy, crappy, crappy Somalis

[Intro]
This is going out to Indians everywhere. It's a tribute to one of the greats...Mr. Adam Sandler 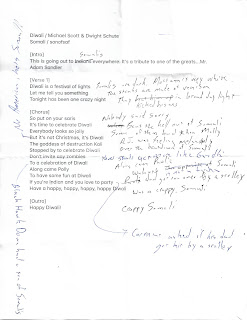 Sopranos?  Seen 'em all.  Easily the greatest dramatic series on television.  Nothing even comes close.  I occasionally watch clips on youtube.

The Office?  Loved it.  But it kinda lost steam when "Sabray" entered the fray.  Regardless, you know my motto... safety first.