Wide receiver Antonio Brown is back in the news.  He apparently stiffed his former chef, Steven Ruiz, for 10K.  So Ruiz went public with Brown's interest in paying cash for a fake Covid vax card.

Just for the record, Brown's middle initial is "T"... as in Tavaris. 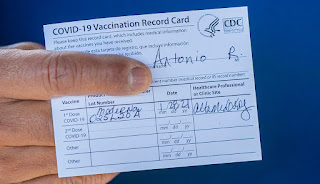 So this random pic from the internet is all the evidence anyone should require.  A.B. is a fraud and a liar.

He's also an asshole.  A few years ago, I saw him driving his sports car in downtown Pittsburgh near the city county building.  He was blasting music, blaring his horn, gesticulating wildly in total frustration... at some old semi-homeless geezer on a walker who was just trying to make his way across the street.  What an ass.

Brown's attorney, the Buccaneers, and the NFL were all quick to issue some cryptically-worded legal statements.

Pfizer shots you shouldn’t fake
And hope they don’t ask why,
In Tampa Bay for the NFL
Touchdowns and catches he wants to score
The yardage wanting more and more
And hoping the front office ain’t judgmental!


I’m Free
The Who

If I told you what it takes
to reach the highest high,
You'd laugh and say 'nothing's that simple'
But you've been told many times before
Messiahs pointed to the door
And no one had the guts to leave the temple! 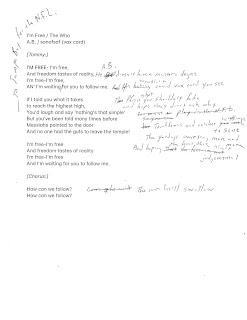 Favorite Who songs in no particular order...  Eminence Front, Won't Get Fooled Again, Behind Blue Eyes, and Bargain.