Yesterday, on election day, several hundred QAnon devotees showed up at Dealey Plaza in Dallas for the reemergence of John F. Kennedy Jr.  Here's the dealio.  Apparently, he faked his own death in a 1999 plane crash.  But was scheduled to appear live in person!  Even better, he was gonna announce himself as the Orange Prolapse's running mate in 2024.  Geesh. 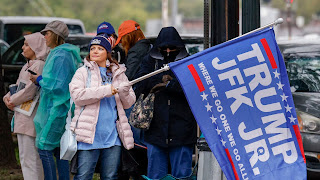 Bad news though.  It was a last minute cancellation I guess.

Someone needs to portray these hardcore QAnoners for who they really are.  Mostly sexually frustrated human beings who aren't getting laid.  Or people just begging for some degree of acknowledgment or companionship.  'Cause if you strip it all down, it's really not that complex.  Merely a consequence of loneliness.  Uh, it's just called lashing out in frustration.  Been there done that.

Next thing you know, legendary warrior Genghis Khan is gonna show up in dahntahn Pixburgh and lecture me on generation warfare and the prospect of indiscriminate killing without conventional weapons.  Seriously, the similarities are dahn-right eerie.

"Can’t get laid?  Just screw it.  If you’re screwing shit, you just got laid."
sonofsaf

Please do not share this material with any descendants of Genghis Khan and/or former President Donald J. Trump.