Wisconsin's Prevea Health just terminated their partnership with Green Bay QB Aaron Rogers over all this health care hootenanny.  They took issue with Rodgers lying about getting the vaccine.  You know, being a healthcare provider and all.  I'm not even gonna delve into the anti-vax shit.  Been there, done that.

Regardless, I'm gonna offer up some free marketing advice.

Rodgers is in a good position to pull off the infamous reverse cowboy.  "Now look what you made me do, you stupid woke fuck."  Not to be confused with a "cheerleader reverse cowgirl."

Aaron Rodgers should become the big pharma daddy for Ivermectin.  He could be their spokesman.  Or how about help promote next year's Astroworld Festival after that fatal stampede in Houston last night?  Or maybe double down with Smith & Wesson or some company that manufactures explosives.

But even better, how about becoming one of those "highly respected" Orange Prolapse-endorsed human beings who would categorically transcend the honor, wisdom and courage afforded by the NFL?

Well, it's easy.  Just simply tweet to Lambeau fans that... in the unlikely event of a stadium evacuation, the initial order would NEVER be delivered via their personal cell phones.  You know... because it would almost certainly be a hoax designed to create an artificially generate stampede.

Whoa!  Wait a minute!  That kind of public safety information "lies" within the realm of generic undiscussibility.

I know, I know.  Disclosing information about hypothetical acts of cyber-terrorism and potential generational warfare atrocities... is probably frowned upon by the federal government. 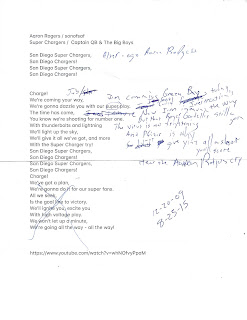 Please do not share this information with Green Bay Quarterback Aaron Rodgers.