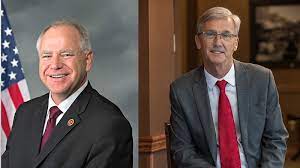 Jensen was all about a total ban on abortion.  Well, until he realized that the majority of rational Midwest voters aren't right wing, pro-life extremists.  Now he's desperately trying to backpedal and soften his stance.  Though not by addressing the specifics.

But rather by cutting ads of him holding a baby. 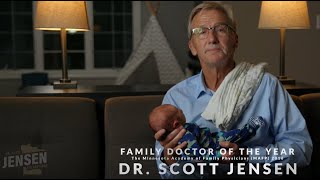 Family doctor of the year?  Get the fuck outta here.  Kinda surprised he isn't wearing a World's Greatest Dad t-shirt.  And rumor has it that he's already plotting his next ad.  A commercial with him changing a diaper.  No shit!

Prediction?  Walz will win convincingly.  Every credible poll has Walz up.

At McDonald’s Trump is dining.
Orange and pink the slime’s reminding.
Because you know he’ll bitch and whine.
Scott Jensen -- Donald Trump is to blame
Scott Jensen -- Trump Republicans prayin’
A flood of blood because J.C. is a con.
Jesus Christ he don’t care, it’s all a mean con

Every time Trump’s out there snarlin’.
NRA’s out there gunnin’.
And I see he’s a crook and not wise.
Scott Jensen, that Jared Kushner’s a Jew.
Scott Jensen, and now Ivanka’s one too.
A flood of blood because J.C. is a con.
Jesus Christ he don’t care, it’s all a mean con

Here’s something you should ponder.
Forty five was a blunder.
The coup was why, that some cops have died.
Scott Jensen, a coup d’etat can be wild
Scott Jensen, all of the hatred and lies.
A flood of blood because J.C. is a con.
Jesus Christ he don’t care, it’s all a mean con

Everywhere the sun is shining.
All around the world it's shining.
But cold winds blow across your mind.
Confusion -- it's such a terrible shame.
Confusion -- you don't know what you're sayin'.
You've lost your love and you just can't carry on.
You feel there's no-one there for you to lean on.

Every night you're out there darlin'.
You're always out there runnin'.
And I see that lost look in your eyes.
Confusion, I don't know what I should do.
Confusion, I leave it all up to you.
You've lost your love and you just can't carry on.
You feel there's no-one there for you to lean on.

Dark is the road you wander.
And as you stand there under.
The starry sky,you feel sad inside.
Confusion,you know it's drivin' me wild.
Confusion,it comes as no big surprise.
You've lost your love and you just can't carry on.
You feel there's no-one there for you to lean on. 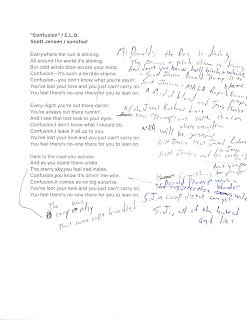 Such a great tune.  Kinda surprised Jeff Lynne omitted this song from his 2019 tour setlist.  Surprisingly, there just aren't any decent quality live versions of "Confusion" out there on youtube.  So I went with the official video.

Please do not share this material with Scott Jensen and/or former President Donald J. Trump.