Trump's former Chief-of-Staff Mark Meadows has been ordered to testify before a grand jury in Georgia next month regarding the 2020 election interference.

I'm pretty sure that Meadows has come to the realization that he's inextricably "linked for life" to the Orange Prolapse.  And that any future political aspirations will likely receive the same amount of due respect and consideration... that Trump has previously given to Top Secret documents.

Regardless, the Fulton County District Attorney's Office will be talking to Mark Meadows.  He'll almost certainly be claiming executive privilege and "blanket pleading" the 5th.  Would you expect any less?

Trump is gay, and so ugly
And he’s fucking you
Donald Trump Jr.’s so fucked up
He’s an Orange Prolapse clown,
God damn, fuck you
You will have to pay, shit ain’t free
Daughter Jew

Walk In The Shadows
Queensryche

What you say, you're through with me
I'm not through with you
We've had what others might call love
So you say it's over now,
What's done, what's through?
You can't stay away, you need me
I need you 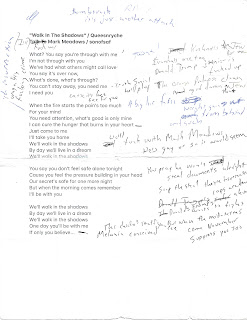 Challenging song.  The lyrics are very choppy and inconsistent.

So... Rage for Order or Operation Mindcrime?

Now that's a tough one.  I'd probably have to go with the latter.

I've always thought the Metallica/ Queensryche tour of the late 80's was one of the most intriguing pairings in metal history. (And Justice For All/ Operation Mindcrime)  Glad I got to see it.  Front row on the floor in Dayton.  But halfway through Metallica I got "shoved" off the railing.  Rowdy crowd.  Probably for the best as I really had to take a piss.  Not a lot of options back in those general admission arena days.