Samuel Graves was elected to Congress back in 2001 as a Republican.  His District in rural Missouri is overwhelmingly red.  So he'll likely be in office for the rest of his life.  Unless he resigns or unexpectedly dies.

Seriously, you can't even make this shit up. 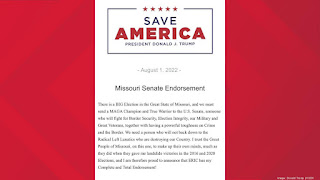 So bad.  Purposely not clarifying.  Even by Trump standards.

Naturally, both of the Erics immediately started claiming credit for the deliberately ambiguous endorsement.  And topping it off, there's actually a third Eric in the race.  Unknown Missouri resident Eric McElroy.

At 52, I've always liked my name Eric.  Until today.  Now, from this day forth, it will essentially be a source of shame and embarrassment.

V.D. infect disease you trust
God damn gonorrhea can lead to crust
Protect the presidency
But Donald Trump’s butt’s the enemy
MAGA they cried and still he lies
To confiscate McDonald’s fries
A Big Mac sheer dependency
Incredible the travesty

Samuel Graves, I know he’s gay
The wait for girls had gotten old
Wet dreams are not a lay

Samuel Graves, voting decays
The show-me-state is fake like you
November 8th’s the day

You go to the church, you kiss the cross
You will be saved at any cost
You have your own reality
Christianity
You spend your life just kissing ass
A trait that's grown as time has passed
You think the world will end today
You praise the Lord, it's all you say

Jesus saves, listen to you pray
You think you'll see the pearly gates
When death takes you away

Jesus saves, no need to pray
The gates of pearl have turned to gold
It seems you've lost your way

Jesus saves, no words of praise
No promised land to take you to
There is no other way 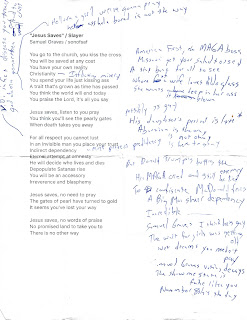