Kari Lake prematurely declared victory today against Karrin Robson for AZ Governor.  Even though she claimed her primary election was probably rigged.  Hey it's a smart strategy.  Because, even if you end up losing, you can still tell everyone that you really won.  Brilliant!

But then she got in a twitter war with Dee Snider.

Lake was using Twisted Sister's "We're Not Gonna Take It" anthem at her rallies.

“Remember when you were anti-establishment?” Lake twatted. (sharing a picture of Snider testifying at a 1985 PMRC Senate hearing in which he spoke against music censorship). 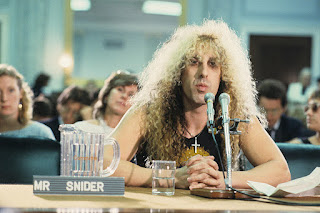 “Remember when you didn’t read my testimony?” Snider fired back. “I stand for what I have always stood for.  Anti right wing, anti fascist, anti asshole.  Pretty much you in a nutshell.”

Donald’s a clown you see a horrible disease
Trump’s shitting after feeding so many turds for all to see
A fast foodie restaurateur, yearning to be a liar
No more winning I'll confess that asshole must retire

Kari Lake’s an ass, Kari Lake her ass is gay

Go and die you whore, and cry some more, it’s just fake news from a fucking creep
Donald Trump is biggie sizing, tiny hands and feet
And he’s taking all of your money, he’ll take more than you can make
In a port-a-jon full of shit the turds are never fake

Kari Lake’s an ass, Kari Lake her ass is gay

Now Trump’s ass is a-whoring, creaming from inside
A Donald insurrection Capitol cops they died
All of MAGA nation, McDonald’s and large fries
And the world is getting stranger Trumpism won’t subside


Take It Back
Pink Floyd

Her love rains down on me as easy as the breeze
I listen to her breathing it sounds like the waves on the sea
I was thinking all about her, burning with rage and desire
We were spinning into darkness the earth was on fire

So I spy on her, I lie to her, I make promises I cannot keep
Then I hear her laughter rising, rising from the deep
And I make her prove her love for me, I take all that I can take
And I push her to the limit to see if she will break

Now I have seen the warnings, screaming from all sides
It's easy to ignore them and God knows I've tried
All of this temptation, it turned my faith to lies
Until I couldn't see the danger or hear the rising tide 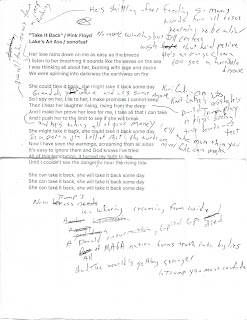 I think Pink Floyd peaked on the 1994 tour with David Gilmour.  Featuring one of the greatest concert setlists in the history of rock'n'roll.  In my opinion, the '94 Pulse tour beats the '88 Momentary Lapse of Reason tour.  But had I been there in 1988, I might have a different opinion.  Hard to say.

But hey, that's just me.

Please do not share this material with Kari Lake and/or former President Donald J. Trump.