If you're a MAGAchusetts Republican, Geoff Diehl is the real deal. 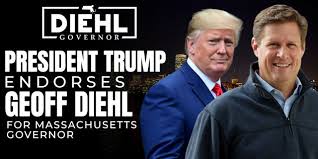 Diehl's running for Governor of the Bay State.  He recently got the much-heralded endorsement from the Orange Prolapse.  I have a funny feeling that as the general election approaches, and Trump knowing full well that the country is shifting blue... he'll refrain from re-endorsing some of these far right candidates in swing states.  Just to name a few... Mehmet Oz and Doug Mastriano in PA, Dan Cox in MD, Tudor Dixon in MI, and yep, Geoff Diehl in MA.  Trump will say that he only endorsed them in the primary and if they lose in the general, well, that doesn't count against him.

As far as the general election goes, he won't wanna see his endorsement victory percentage take a serious hit.  It's called using people up and spitting them out.  And it's what he has done all his life.

Now there is a scenario where Trump re-endorses all Republican candidates (no exceptions).  Maybe if a black swan tragedy occurs on Biden's watch.  One that excoriates the Democratic party and sours the entire U.S. voting population on the Dems.  If I had to hazard a guess, I'd say that particular disaster would be a "dominipede" (domino stampede impacting the NFL & MLB) on Sunday, September 11, 2022.

And god forbid, if it's the result of an errant presidential terror alert, well, that's pretty much a lights out scenario for the entire Democratic party.  And a gift to Trump in the form of his reelection in 2024 and a future U.S. dictatorship.

Just a hunch based on common sense speculation regarding the trajectory of wireless disinformation and cell phone proliferation.  And oh yeah, when you turn on the news... and everyone's running for their lives.

Everyone knows that he’s gay
And an asshole disaster

Into the night, babe
Baby tonight
Make it tonight
Ooh... 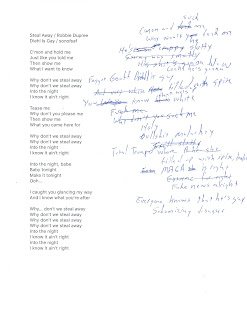 Great song.  Timeless.  Robbie Dupree released his mega-hit cover version of Steal Away way back in 1980.  It appears he stopped touring in 2019.  Dupree is now 75 years old and has never played the Burgh.  Odds of me seeing him perform live are probably nonexistent.  And I'm okay with that.

Please do not share this material with Geoff Diehl and/or former President Donald J. Trump.