Lately, Mack's been trying to establish a nationwide posse of sheriffs to launch investigations into non-existent voter fraud.  And provide "necessary supervision" at the polls.  Which translates into voter intimidation.  Trump sycophants like him are a direct threat to democracy and the rule of law and order.  I'll keep it simple, big Mack... is a piece of shit. 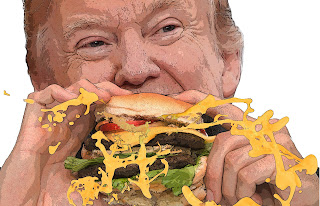 Dear Sir or Madam, will you read my book?
It took me years to write, will you take a look?
It's based on a novel by a man named Lear
And I need a job, so I want to be a paperback writer
Paperback writer

It's a thousand pages, give or take a few
I'll be writing more in a week or two
I can make it longer if you like the style
I can change it round and I want to be a paperback writer
Paperback writer

If you really like it you can have the rights
It could make a million for you overnight
If you must return it, you can send it here
But I need a break and I want to be a paperback writer
Paperback writer 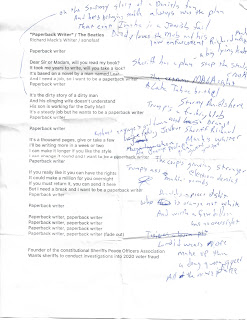 Great tune.  He played it at his 2014 concert in the Burgh.  The same show where a Pitttsburgh cop stole my ticket and kicked me out of the arena.  So Saf, what did you do?  What was your criminal offense?  Public intox?  No.  Fighting?  Uh no.  I didn't do shit.  The asshole pig simply saw me walking on the concourse and was infuriated because he witnessed Mason and I scoring free tickets to the sold-out show.  Click the link below for the whole story.  Eight years later, it still pisses me off.  You know... that a scumbag cop can get away with theft in the form of a strong-arm robbery.  Seriously, for the love of dog, it was Sir Paul McCartney.  Not some dumbshit Foghat concert.

Please do not share this material with Richard Mack and/or former President Donald J. Trump.